A tiny tropical island in the Indian Ocean may have been the inspiration for Peter Pan's fictional Neverland, new evidence suggests. Researchers have found a number of striking similarities between the imaginary Neverland created by author J. M. Barrie and a remote previously-inaccessible island in the Andaman Sea called Boulder Island.

The discovery has led to speculation about the origins of Neverland by historians, map-makers, literary experts and travel writers. Claims that the deserted, jungle-clad island may have influenced author Barrie are supported by a number of intriguing links, says New Zealand travel writer Keith Lyons, who has been investigating the case since mid-2018.

“While the Scottish novelist and playwright never visited in person India or Asia, there are many coincidental connections which suggest that the author of Peter Pan knew about the island, which was once part of British colonial Burma.”

The quest to find the real world Neverland of Peter Pan, Wendy, the Lost Boys and Tinkerbell was sparked two years ago when an antique-style map of Neverland was matched with satellite images of Boulder Island in the Mergui Archipelago off the coast of Myanmar. “The moment I saw the map I was struck at how closely it resembled Boulder Island in the Mergui Archipelago,” says Norwegian boat and resort operator Bjorn Burchard of Moby Dick Tours. “It was amazing how similar they looked, with the same features of beaches, bays, coastline, jungle, lakes, islets and rocks.”

The uncanny similarity of the islands has been confirmed by several experts, including a former Indian Army cartographer and surveyor. The white-sand, coral reef island was originally named in the 19th century by the famous Scottish hydrographer James Horsburgh. The Mergui Archipelago served as a carefree holiday destination for Brits posted to Burma, paralleling the role of Neverland as a place of eternal childhood, escapism and immortality. However, since the 1940s the island group was out-of-bounds to all due to political and military reasons.

It is only in the last decade that outsiders were allowed into the archipelago of 800 uninhabited islands, which straddles Myanmar and southern Thailand. A small-scale conservation-led resort Boulder Bay Eco Resort opened recently, with a bamboo yoga studio designed by New Zealand architect Richard Morris.

Horsburgh Island, with its distinctive shape, features prominently on early nautical charts and maps due to its location in the outer edge of the treacherous coral island archipelago. “Barrie would have been familiar with Horsburgh’s achievements for the East India Company, and in creating an island, perhaps he used the island surveyed and named by the hydrographer for his inspiration,” says Burchard.

Former Indian Army cartographer and surveyor, Col Sanjay Mohan, of Map & Locations, who has examined maps of the fictional island and satellite images of Boulder Island, says the puzzle of Neverland’s location and origins reveals much about the role of the imagination and stories in map creation. "In the past, some historical maps were created by cartographers from visitor tales, highlighting that imagination and fiction have been an integral part of cartography.The resemblance of a real island in the Andaman Sea to Peter Pan’s Neverland could just be a coincidence, or it could be because the map-maker took inspiration from the actual map or chart of Boulder island.”

Lyons says there's more than just similarities in the shape of Boulder island to the first depictions of Neverland. “Not only does the island appear very similar, the location of the island, its previous name, and the presence of pirates, Indians, crocodiles – and even mermaids – support the theory that Neverland wasn’t just a faraway, made-up place,” says Lyons. “What’s more, there were strong Scottish and literary associations with Burma, and Barrie was influenced by many of his friends and contemporaries who had lived in or visited Burma, including poet Rudyard Kipling who probably sailed past the island.”

Travel writer and photographer Dave Stamboulis (www.davestamboulis.com), author of ‘Odysseus’ Last Stand’, who visited Boulder Island for USA Today says there are some Neverland qualities about the island. “There are plenty of places to roam about, be alone, and certainly nobody is going to tell you what to do or not do. The beaches were pretty fabulous in terms of a Robinson Crusoe paradise type of place. As with Neverland, travelers are always searching for places of dreams. These dreams, or at least fantasies, usually involve pristine and untouched places, or at least postcard-perfect versions of them. Boulder does come close, because it hasn’t been tarnished or spoiled the way most beaches in South East Asia have.”

“The Mergui Archipelago’s long reputation for menacing pirates and its roaming sea gypsies certainly add to the case for Boulder Island being the inspiration for Neverland,” says travel writer Christopher Winnan, author of ‘Around the World in Eighty Documentaries'. Saltwater crocodile inhabit the region’s estuaries, with nearby Ramree Island regarded as the most dangerous island on the planet, holding the world record for crocodile attack fatalities, and iguanas so large they were mistaken for crocodiles, there are other exotic creatures found throughout the Andaman Sea.

“Very little is known about the remote islands of the Mergui Archipelago, so who is to say that Boulder Island itself might not be inhabited by even more unusual inhabitants? Tinkerbell and the Lost Boys may not frolic among the hollow tree trunks, but clownfish and parrotfish still play hide and seek in the coral reefs.” 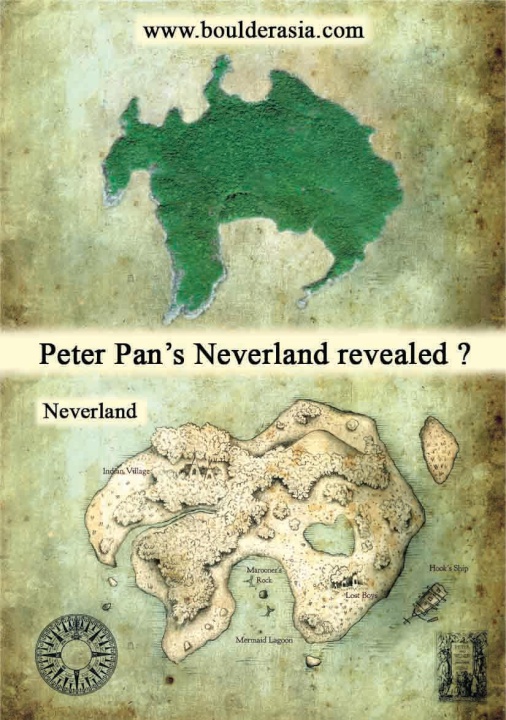