On The Calls For “Freedom” From Covid Restrictions 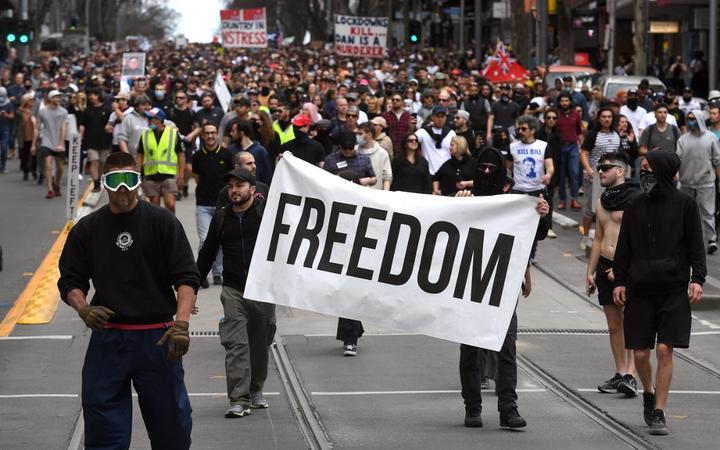 Free markets, free minds, free choices, Freedom Days. In recent years, has any notion in the English language been so overused and so abused as “freedom?” Freedom used to be the rallying cry of the oppressed and the marginalised. Now it is the clarion call of the privileged, who feel resentful of central government and its undue concerns for those among us who have wilfully failed to optimise their options. Urban and rural, the upper 5% are yearning to break free of their chains.

Well before Covid, freedom’s currency had been debased. The process began in the mid 1980s. Suddenly the free market meant that the factory where you worked had been wiped out by the free influx of cheap foreign imports. You were freed from joining a union, which meant employers were free to cut your wages and conditions. Firms were freed from the attentions of health and safety inspectors which meant more people were free to die on the job. People were freed from the burden of owning public assets, thus leaving the new owners free to charge whatever they liked. Monopolies were left free to grow, and to price gouge. Thanks to the miracles of the free market, you were free to pay the same price for cheese made in New Zealand as people were paying for the same cheese after it had been shipped 18,000 kilometres to Britain. Freedom rules!

Basically, we have all been made free to be ripped off, and free only to choose when, how and by whom. Having so much freedom can, literally, kill you. Then along came the pandemic, which can also kill you. Once again, “freedom” has been wheeled back into service. Measures that protect the public from infection are being depicted as outrageous infringements on one’s precious freedom to infect other people: your spouse, your children, your older relatives, your friends and your workmates. Your freedom to be infected, and to infect other people is being held, by some, to be sacrosanct. On social media, vaccine mandates are being equated with the totalitarian excesses of George Orwell’s 1984.

As Orwell also pointed out, some people feel themselves to be deserving of more freedom than others. Their goal is not to ensure that government is better able to serve the public interest, but to ensure it isn’t able to obstruct the accumulation and consumption of private goods. Those values seem to have trickled down into everyday life. For example: thanks to the media giving him a platform, one tourism operator felt free to declare on RNZ last week that Aucklanders are being ‘caged’ for no good reason, and that if people aren’t vaccinated by December 1st, then that’s “100%” their problem.

Personally, I think there’s something wrong with a concept of liberty that (a) elevates the opportunity for profit above the risk of harm accruing to other people (b) enables parents to expose their children to the risk of being infected, and © encourages people to shrug their shoulders at the prospect of thousands of their fellow citizens getting ill or dying from a terrible disease. Supposedly, that outcome would have been their “choice.”

“Freedom” really doesn’t deserve to be abused in this fashion. For the record: no-one’s legitimate freedoms are being trampled on when the government urges us to get vaccinated, or requires people to do so if their work involves the care of others, or daily proximity to known risks of infection. IMO, we have a duty of care to other people that (inevitably) involves some element of self-denial. That’s the price of living in a society, and if the lockdowns have taught us anything, it is that we are all social animals.

Besides, none of us actually enjoy getting vaccinated. All the same, no-one should expect to be personally rewarded for doing so, or should complain that hey - if I’m not being personally rewarded, then what was the point? To state the obvious: The point of getting vaccinated is to protect yourself, while you minimise doing harm to other people by transmitting the virus to them. The related point of getting vaccinated is to avoid contributing to the crashing of the public health system, given that Delta is known to spread like a forest fire among the unvaccinated. There’s self-interest, as well as altruism, involved in trying to ensure that our hospitals, and the dedicated people who work in them, are not overwhelmed by a tide of infections.

Freedom is a particularly loaded term within the nuclear family, where the patriarchy still tends to rule. But IMO, no parent has the freedom to put their child at risk of death and debilitating illness, because of (a)the parent’s personal distrust of science and Big Pharma or (b) their personal beliefs about their “natural” bodily purity and self-healing abilities or (c) because God told them that vaccines are an affront to His monopoly on doling out life and death. Once you pass “Go” and collect the baby, parenting has always been more about responsibility than it is about autonomy.

Within and beyond the home, we routinely accept limits on our freedom, for the wider good. For example: we are not “free”to drive as fast as we like and endanger other people on the road. We accept limits on freedom of speech that might harm, endanger or defame other people. Therefore, why should we be “free” to endanger other people and clog up the hospitals? As parents, we are not free to beat our children in the name of discipline. As parents, we are not free to deny our children food, care and an education. Regardless, some of us claim the right to expose their children to a heightened risk of harm from deadly and damaging diseases. Go figure.

The golden rule is – or should be – that we are free to make personal choices, so long as the exercise of that choice does not do harm to other people. Claiming the freedom to put your own children (or other children) at deadly risk without their consent seems selfish to the point of insanity. Surely, our loved ones and our workmates also deserve the freedom NOT to be further exposed to the Delta virus, because of our own wilful beliefs and inactions. As columnist Paul Krugman put it recently, vaccination is not a personal choice: it is a public duty. Amen to that.

Footnote One: I don’t mean to suggest that every champion of freedom and everyone resentful of lockdowns is privileged, although the most vocal with the readiest access to the media certainly seem to be. Beyond that, a lot of people don’t feel like being told by the government to pull together and make sacrifices for the Team of Five Million when successive governments have treated them as disposable.

As we saw in the US, many of those who feel marginalised and left behind feel like venting their anger whenever political elites tell them what to do. But as we also saw in the US, the politicians urging them onwards are not their allies. If in power, they would enact policies that would further harm the marginalised. Perpetual anger is the fossil fuel of populism.

Footnote Two: Strangely enough, the anti--vaxx champions of freedom appear more than willing to impose their beliefs (and the related risks) onto everyone else. To be consistent, they should be living as hermits and should never use the public health system ever again. Yet that’s not how they tend to roll.

Footnote Three: Here and elsewhere, anti-vaxx hypocrisy knows no bounds. In the name of freedom, Fox News has spent the past six months pumping out anti-vaccine messages on a daily basis, even though as Vanity Fair has reported, Fox imposes strict vaccine mandates on its own employees. Reportedly, Fox’s CEO and 90% of its employees are fully vaccinated.

Footnote Three: Like Fox, Destiny Church is flexible when it suits it to be. Church leader Brian Tamaki has led anti-lockdown, anti-vaccination protests in Auckland. Yet evidently, those moral stances are not free to interfere with the Tamakis’pursuit of the profit motive, and with their personal commitment to the prosperity Gospel:

Today Tamaki's wife, Hannah, said the Christian church run by the duo earned money leasing buildings it owned to a medical clinic giving out vaccinations and using a car park to do Covid tests.

Finally, it comes down to whether we feel a commitment to the well-being of other people, even when that doesn’t suit us, entirely. Famously, Margaret Thatcher once claimed that society does not exist. Arguably though, society isn’t an optional extra, or merely an aggregate of free floating individuals. Only the privileged have the luxury of that worldview. Consciously or otherwise, such people seem to regard society as a machine whose only valid purpose is to furnish them with further opportunities for gratification. Any reciprocal social demands are either to be ignored, or resented. Let other people get vaccinated by Freedom Day, December 1st, or else. Death to the ‘laggards’! They had their chance, but they’re killing our business, and our buzz. Most of us would hope that’s still a minority view.