NZ tsunami monitoring and detection system to be established 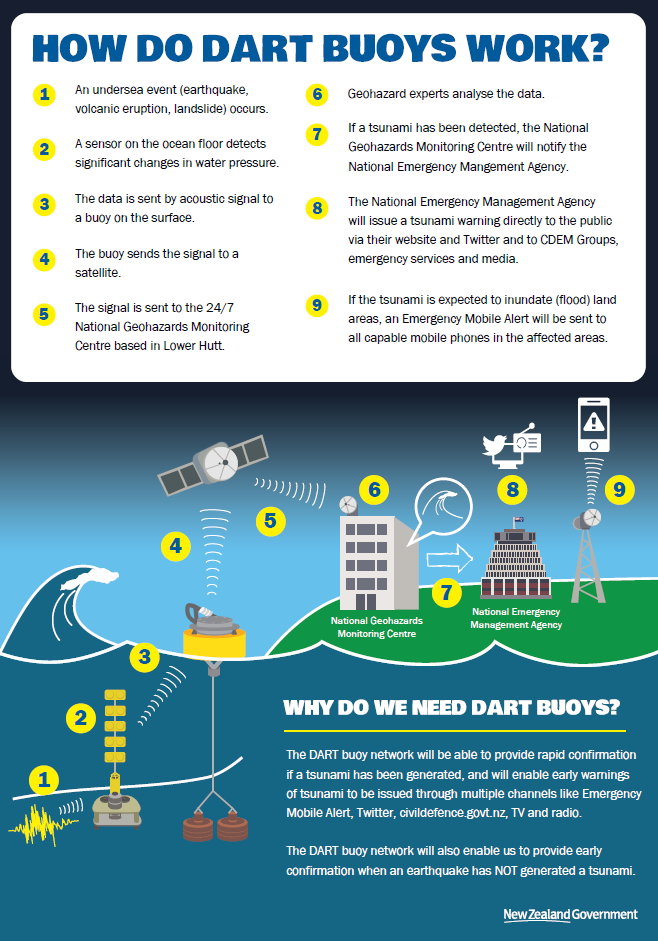 “New Zealand and the Pacific region are particularly vulnerable to natural disasters. It is vital we have adequate warning systems in place,” said Mr Peters.

“DART buoys are the only tried and repeatedly tested technology that confirms the generation of tsunami waves before they reach the coast. This is particularly critical for unfelt earthquakes originating from the Kermadec trench. We have invested in the best equipment to keep New Zealanders safe.

“Until now, New Zealand has been reliant on a single, aging DART buoy. This is a shocking inadequacy that we have addressed with urgency,” said Mr Peters.

“We are establishing a network of fifteen DART buoys to provide early detection and support warnings for tsunami generated from the Kermadec and Hikurangi trenches right on our doorstep,” said Mr Henare.

“The coalition Government has prioritised a significant and ambitious programme of work for emergency management and response. This system will provide rapid confirmation if a tsunami has been generated, and will enable more accurate warnings of tsunami that can be communicated via public alerting systems like Emergency Mobile Alert.

“This is about saving lives – people are at the heart of what we do,” said Mr Henare.

GNS Science’s National Geohazards Monitoring Centre will support the 24/7 monitoring to receive, process and analyse the data from the buoys, and the National Emergency Management Agency will issue tsunami warnings and advisories to the New Zealand public.


Note for Editors:
What is a DART buoy?
DART (Deep-ocean Assessment and Reporting of Tsunami) buoys are deep-ocean instruments that monitor changes in sea level. They are currently the only accurate way to rapidly confirm a tsunami has been generated before it reaches the coast. This is about keeping people safe by giving advance notice that a tsunami is heading our way. This is particularly critical for unfelt earthquakes originating from the Kermadec trench. Early detection of a tsunami using DART buoys allows us to accurately provide early warnings using a range of communication channels including Emergency Mobile Alerts.
How do DART buoys work?
DART buoys detect tsunami threats by measuring associated changes in water pressure via sea floor sensors. They are capable of measuring sea-level changes of less than a millimetre in the deep ocean. Two-way communication between a DART buoy and a 24/7 monitoring centre allows rapid assessment to threats and enables subsequent warning advice to be provided to the public. This is about keeping people safe by giving advance notice that a tsunami is heading our way.
Why does New Zealand need DART buoys?
New Zealand faces significant life-threatening tsunami risk. New Zealand’s geographical and geological place in the Pacific, puts us at risk from many different tsunami sources, some may be generated and arrive at our nearest coasts in less than an hour. That’s why we need to invest in the best equipment to detect a tsunami has been generated to keep New Zealanders safe.
DART buoys are the only tried and repeatedly tested technology that confirms the generation of tsunami waves before they reach the coast. This is particularly critical for unfelt earthquakes originating from the Kermadec trench. For this type of tsunami risk, without DART buoys, it is not possible to provide accurate early warnings of tsunami risk through public alerting systems like Emergency Mobile Alert. DART buoys means we can better target warnings and understand how big tsunami waves will be.
Not all sea floor disturbances such as underwater earthquakes, cause tsunami. The DART buoys will also provide rapid confirmation of when no tsunami has been generated following large earthquakes and other possible “trigger” events in the ocean.
Why has the Government decided to invest in this equipment now?
The decision to invest in the network is supported by numerous initiatives including:
• The Government’s priority to improve the consistency of warnings as prioritised in the ‘Ministerial Review: Better Responses to Natural Disasters and Other Emergencies in New Zealand’;
• The establishment of the National Geohazards Monitoring Centre – a 24/7 monitoring facility with the ability to quickly process information from the DART buoys;
• The implementation and use of the national Emergency Mobile Alert system (EMA);
• New science confirming some earthquakes of up to Magnitude 9 (M9) originating in the Kermadec Trench, are not able to be strongly felt in New Zealand.
• Aligned with the Pacific Reset initiative as it provides demonstrable assistance through critical resilience building for many Southwest Pacific countries and ancillary benefits to other Pacific countries.
Overview of the end to end process from seafloor to tsunami warning:
1. An event that could trigger a tsunami such as a large undersea earthquake or undersea volcanic eruption occurs.
2. If a tsunami is generated, there are rapid and unusual changes to the water pressure on the sea floor.
3. The DART buoy’s sensor on the ocean floor measures water pressure.
4. The measurements are sent by acoustic signal to a buoy on the surface.
5. The buoy sends the signal to a satellite.
6. The signal is sent to the 24/7 National Geohazards Monitoring Centre at GNS Science.
7. GNS Science Geohazards Analysts analyse the data.
8. If a tsunami has been detected the Geohazard Analyst will notify the National Emergency Management Agency, the official tsunami warning agency for New Zealand.
9. The National Emergency Management Agency will issue a tsunami warning to CDEM Groups, emergency services, media and directly to the public via their website and Twitter.

If flooding of land areas is expected, the National Emergency Management Agency will also send an Emergency Mobile Alert to all capable mobile phones in the affected areas.