A nationwide Horizon Research survey during the first three days at Level 3 finds a combined 88% of adults think “we shouldn’t rush into it” or “we should make a considered decision based on trends”.

23% say their view on depends on what the conditions are for Level 2.

Just 5% want to go straight from Level 3 to no restrictions.

Horizon says some are eager to move: 13% say it “can’t come soon enough”. 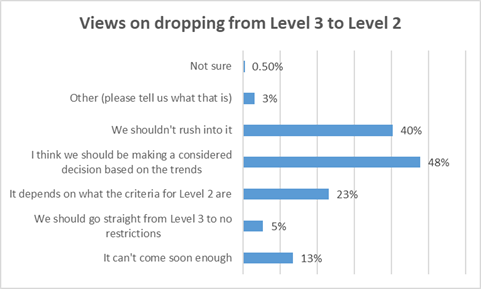 Agreement with the view that a considered decision should be made based on trends is at around the same levels among those who voted at the 2017 general election for National, Labour and New Zealand First. Among Green voters, 64% want a considered decision. Among ACT voters support for this view is at just 10%. 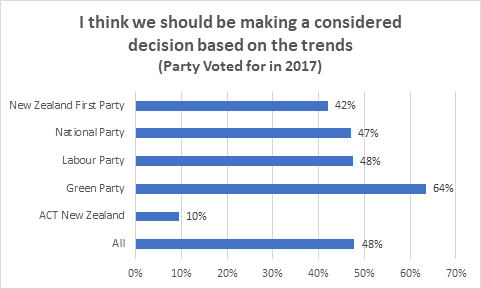 Amid reports and complaints about people breaching Level 3 rules, and large numbers returning to work and engaging in contactless shopping, compliance with restrictions remained extremely high.

The results indicate around 35,900 adults are not complying during the first three days of Level 3, while an estimated 3,532,600 are.

The survey has 1,151 respondents aged 18+. It was conducted using the specialist national online  HorizonPoll research panel between April 28 and 30, 2020. Weighted by age, gender, employment status, educational level and region/ local government area to provide a representative sample of the 18+ population at the 2018 census, the maximum margin of error, at a 95% confidence level, is +/- 2.9% overall. 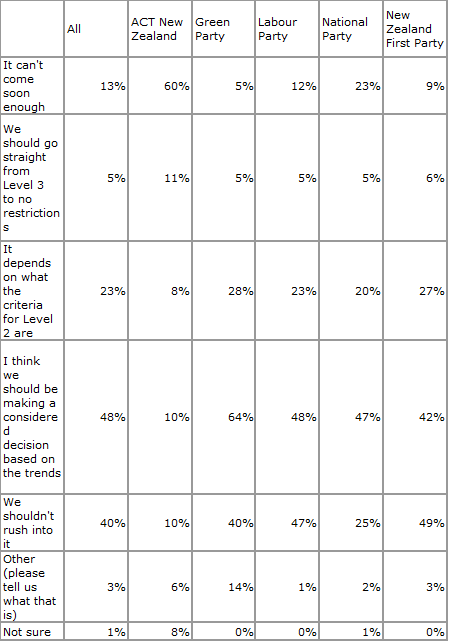 Gordon Campbell: On Who Decides On The Priority List For Vaccines

During the past week, the nation has gone through a range of mixed feelings about south Auckland. Understandably, there’s been a hankering in some quarters to punish a few of the rule breakers who plunged all of Auckland back into lockdown…Yet alongside that impulse there also been compassion for the way that poverty and overcrowding make south Aucklanders extremely vulnerable to the spread of the virus... More>>