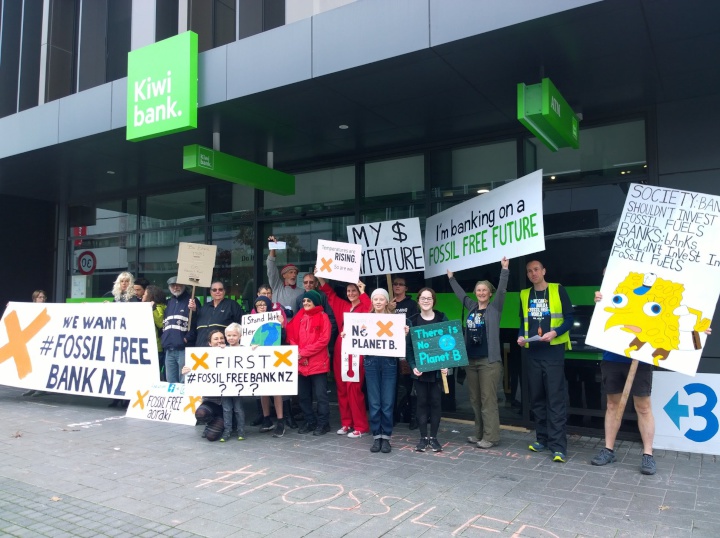 350 Aotearoa campaigner Erica Finnie said “Kiwibank has given New Zealanders an essential banking option that guarantees our money isn’t being funnelled into dirty fossil fuels. We’re at a critical stage in the fight for a safe climate future - and the science is clear that we must stop all new fossil fuel projects and rapidly transition to a 100% clean energy future, and support workers into sustainable jobs.”

Finnie said “By cutting its ties with coal, oil, and gas companies, Kiwibank is setting a new standard for Aotearoa’s banking sector. Our banks hold the purse strings on the large sums of money fossil fuel companies need to borrow in order to explore for and extract oil, gas and coal. Our major Australian-owned banks are culpable for the continued burning of fossil fuels that are causing climate breakdown: ANZ, ASB, BNZ, and Westpac have collectively poured over AUD $35.5 billion into coal, oil, gas projects since 2016.”

“If all of our banks stopped funding fossil fuel projects tomorrow, it would have a tangible impact on the viability of the industry and enable a faster transition towards a renewable energy future. The rest of Aotearoa’s finance sector needs to follow in Kiwibank’s footsteps and take a moral stand to reject fossil fuels as an industry that is acceptable to support and be associated with.”

350 Aotearoa launched a campaign calling for banks in Aotearoa to stop investing in and lending to fossil fuels in 2015 and has been directly focused on pushing for Kiwibank to announce an ethical banking policy since 2018.

Finnie said “Kiwibank has listened to its customers and its community. Since 2015, thousands of New Zealanders have called for banks in Aotearoa to stop investing in and lending to fossil fuel companies that are causing climate change. The power of our collective call for change meant citizens won over dirty-energy lobby groups.”

350 Aotearoa’s campaign for banks to cut ties with the fossil fuel industry is part of a globally coordinated campaign led by 350.org to end all fossil fuel finance. “If we can stop the funding, pipelines and drilling sites cannot go ahead, and fossil fuels will have to stay where they belong: in the ground,” said Finnie.

Scoop’s ambition for bringing NextElection to NZ is to use it to strengthen and expand Scoop Citizen activities under the auspices of the Scoop Foundation for Public Interest Journalism.

The nextelection.nz platform has been populated by the project team with channels for all the 2020 General Election candidates and political parties. It also features up to date geolocation data based on the latest electoral boundaries. More>> Joint Press Release: NextElection, Scoop.co.nz, ScoopCitizen