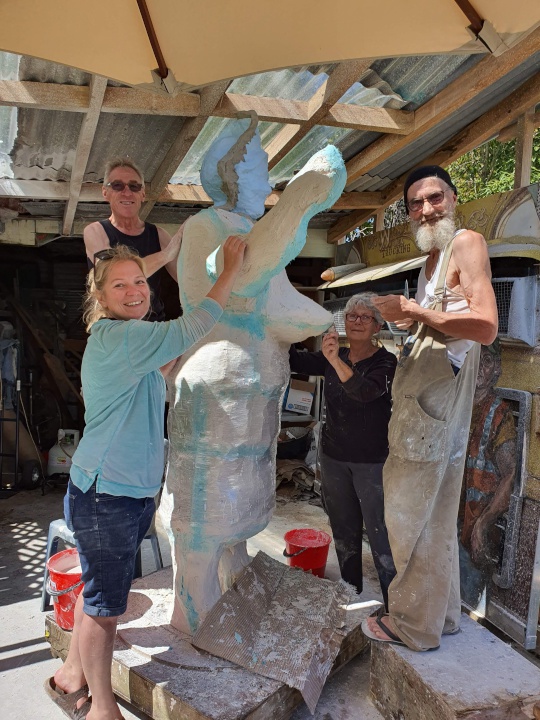 
Dame Hilda Ross was the first Hamilton/Waikato woman elected as an MP in 1945 and became the second woman in New Zealand to become a Cabinet Minister in 1949. Artist Matt Gauldie’s bronze sculpture portrays Dame Hilda in Parliament, with one hand holding a copy of the 1919 Act which finally allowed women to become MPs, while the other is raised, advocating on behalf of women and children, whose welfare she considered her principal concern.

The sculpture unveiling will be a public event featuring live music performances and guest speakers, Dame Marilyn Waring and feminist historian, Dr Jenny Coleman and Georgina Beyer. The compere is The Very Reverend
Wendy Scott, Dean of St Peter’s Cathedral. At Dame Hilda’s funeral in 1959, 10,000 people paid their respects to her by lining the route taken by the cortege from the Cathedral to the Newstead cemetery.

Margaret Evans, Hamilton’s first woman mayor (1989-1998), and from TOTI Trust who commissioned the sculpture, says “We realised that an almost invisible piece of national history had been overlooked. Many know that women obtained the right to vote in 1893 but not that they were prohibited from a seat in Parliament until 1919, and that right also had to be fought for. The unveiling will be a celebration of one of our nation’s greatest 20th century women, along with the progress women have made in being represented in parliament as we mark the anniversary of the enabling Act.”

Dame Marilyn Waring, National MP (Waipa 1975-1984) and author of “The Political Years” was once predicted as ‘the next Hilda Ross’. She says the Hamilton event is “a great time to be celebrating parliamentary women!”. The 2020 general election resulted in a record high of 23 new women MPs. From 1919, until this year's election there had been a total of 150 women MPs nationally.

Associate Professor, Jenny Coleman, author of “From Suffrage to a Seat in the House” is currently writing a new book on women MPs’ maiden speeches. She notes the poignancy of Marilyn Waring’s first speech in Parliament, made in 1976 when she was 23.

“I would not presume to teach other members anything about politics, but they should be well aware that occasions will arise when further representation should be given to the point of view of the youth and the women of this country, who are grossly numerically underrepresented in this House.”

New Zealand now has the most diverse House ever in terms of age, gender, LGBTIQ, ethnicities, and Māori representation. Jenny Coleman says Dame Hilda Ross chose a “positive frame of reference for her maiden speech” insisting

“We must never lose sight of our paramount duty to serve the people - all the people, not merely one section of the community.”

Georgina Beyer, Labour MP (Wairarapa 1999-2005) who was not only the world’s first openly transsexual to be elected as Mayor but also the first transsexual in the world to be elected to Parliament said in her maiden speech.
“Mr. Speaker, I can’t help but mention the number of firsts that are in this Parliament … Our first Rastafarian, …. Polynesian woman… and yes, I have to say it, I guess, I am the first transsexual in New Zealand to be standing in this House of Parliament. This is a first not only in New Zealand, ladies and gentlemen, but also in the world. This is an historic moment. We need to acknowledge that this country of ours leads the way in so many aspects. We have led the way for women getting the vote. We have led the way in the past, and I hope we will do so again in the future in social policy and certainly in human rights”

Artist Matt Gauldie is recognised nationally for his ability to breathe life and movement into bronze. With this latest artwork, he has infused the metal with Dame Hilda’s inspirational qualities which include “warmth, power, charisma and elegance”. Gauldie and foundryman Ross Wilson credit fellow team member, and renowned model maker Jude Feickert’s skills as being “the best” in New Zealand. “She makes us look good”, says Wilson. When referring to the team who created the sculpture, which also includes Roy Harkness and apprentice Lucia Stewart, Wilson adds, “We don’t work, we play, creating for the joy of it.”


Background
TOTI also advocated commemorating New Zealand’s first Maori woman MP Iriaka Ratana, (Western Maori 1949-1969, Labour) alongside Dame Hilda at the Garden Place site but were unable to obtain Waikato/Tainui or Ratana endorsement. The two women MPs were colleagues and friends who collaborated in the interests of people and nation, cross-party social activists committed to the welfare of families and children. In 2018, the Parliamentary Service Commission Committee declined a proposal by TOTI to acknowledge the three political pioneers, Mabel Howard, Dame Hilda Ross and Iriaka Ratana with bronze statues in the grounds of Parliament.

• 2.00 pm: Central Library, Associate Professor, Jenny Coleman author of new book ‘From Suffrage to a Seat in the House’ will be speaking further on Dame Hilda and women’s fight to become MPs. Marilyn Waring will be speaking about her life and new book ‘The Political Years’