Today, for the second time in two months Dunedin climate protectors have locked themselves to the railway tracks outside the Dunedin Railway station to stop the KiwiRail coal train from Bathurst Resources’ Takitimu mine in Southland to Fonterra’s Clandeboye milk factory in Canterbury. 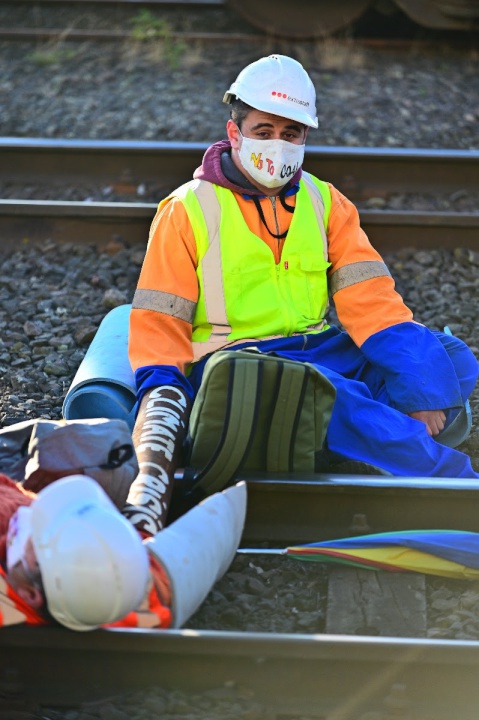 “Two people are locked onto the tracks in front of the train and another two are on top of the coal trucks” said Extinction Rebellion spokesperson and high school student Jana Al Thea.

“We’re here to tell KiwiRail to Stop hauling Coal. KiwiRail is carrying climate-destroying coal to make a profit for the very government that has declared a Climate Emergency” she said.

The daily coal train recently derailed on dilapidated tracks between Bathurst’s Takitimu coal mine and Invercargill. The government has agreed to pay around $5 million to repair the tracks.

“That line only carries coal. Why are NZ taxpayers spending $5 million to subsidise coal during a climate emergency?” asks Extinction Rebellion’s Bruce Mahalski. “That is unconscionable.”

“We have a message for our Prime Minister, Jacinda Ardern. In four days’ time the Climate Commission will give their first package of independent advice to the government. Will Jacinda take that advice? Will she walk the talk? If so, coal must end.”

Gordon Campbell: On Some Of The Moral Objections Being Levelled At Covid Vaccines

Quite the switch. Barely three months ago, the government was priding itself on cannily spreading its vaccine bets between Pfizer, AstraZeneca, Novovaxx and the Johnson and Johnson vaccine being produced by its subsidiary, Janssen. It had seemed like a good idea to have supply contracts in place with almost the entire field given the uncertainties... More>>