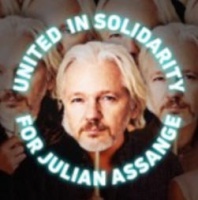 This coming Friday 3rd August sees the launch of the third monthly #Unity4J online vigil in support of Julian Assange and WikiLeaks.

Advocating from their own unique perspectives for press freedom and the restoration of Julian Assange's human and asylum rights, this paradigm-smashing supergroup are tirelessly organising for Assange’s immediate release from his arbitrary detention in the Ecuadorian Embassy in London.

Past vigils have been a great success, drawing in tens of thousands of viewers across multiple platforms, and receiving shares by official Julian Assange and WikiLeaks accounts on social media.

Organizer Suzie Dawson said: “Julian Assange is effectively in solitary confinement with no end in sight, while facing severe health risks, legal threats and deprivation of his human rights.

Julian’s situation is dire, tenuous and pressing. In response, each month an ever-growing and diverse group of established public figures combine their reach to spread the word about the urgency of Julian’s situation and issue calls to action.

They are those whose conscience will not allow them to be silent in the face of the grave injustices inflicted upon a journalist and publisher, and like Julian, they are on the right side of history.”

The #Unity4J movement has recently expanded, creating a 2,500-strong “non-violent digital army” on a new collaborative public platform, where volunteers interact and advance projects related to the cause, in real time.

That platform is hosted at https://unity4j.com/discord

Event livestream will be accessible at: http://unity4j.com/stream

MEDIA INQUIRIES: Media inquiries and interview requests should be made to Suzie Dawson, via DM on Twitter: @Suzi3D, or Elizabeth Vos on Twitter via @Elizabethleavos, or by emailing info@unity4j.com

For more background on the recent escalation of grave threats to Julian Assange’s life and liberty, we recommend reading the following articles:

Courage Foundation: Assange’s protection from US extradition “in jeopardy”

Did Rep. Adam Schiff Just Admit the US Has a Secret Indictment of Julian Assange?

Conspiracy emerges to push Julian Assange into British and US hands

It has been months since Julian's internet access and visitation rights at the embassy were abruptly revoked by the Ecuadorian government. In response supporters swiftly organized #ReconnectJulian, a 10-hour-long online vigil event where friends and supporters of Julian came together to speak for the voiceless. We are now once again organizing a massive event in support of Assange and WikiLeaks. This collaboration has birthed #Unity4J - An upcoming series of events taking place on the first weekend of each month.