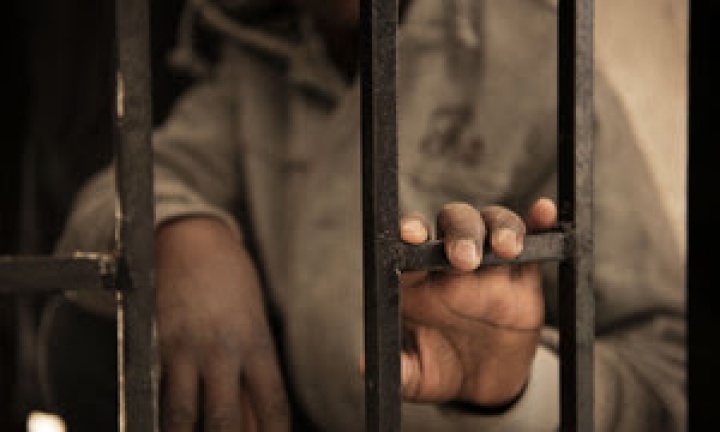 Fourteen-year-old Issaa, a migrant from Niger, rests his hand on a gate inside a detention centre, in Libya, in January 2017. His mother died two years ago in Niger. He managed to set aside US$450, which he hoped would pay for a crossing by boat to Italy. He was arrested and detained before he was able to board a boat.

More than 5.4 million children are detained around the world, rights experts said on Monday, highlighting “aggressive” State counterterrorism measures for the spike in youngsters held for alleged links with armed conflict or national security concerns based on their social media posts.

From children recruited by extremists to street children, those with disabilities and others who travel with asylum-seekers and migrant families, depriving them of their liberty increases the likelihood that they will be abused or worse, the UN Global Study on Children Deprived of Liberty noted.

“Children should live and grow up in families (or) foster families”, he insisted, “not in institutions where they are in fact deprived of liberty, where there’s strict discipline and a lot of violence. There’s no love.”

According to the report, children have been increasingly detained and prosecuted in the context of armed conflict or national security concerns for their online activities, “including posts to Facebook and Twitter”.

Depriving them of their liberty is linked to anxiety, depression, suicidal thoughts and post-traumatic stress, it notes, adding that psychiatric disorders for children in detention can increase tenfold during detention, which is also correlated with early death among children once released.

30 years ago the UN adopted the Convention on the Rights of the Child. After all this time, how’s the world performing on children deprived of liberty? Our free #MOOC on Children Deprived of Liberty: Learning from the UN Global Study starts today! #CRC30 https://www.youtube.com/watch?v=EEBUEkL2XlY …

Citing medical assessments on the impact of detention on child migrants held on Nauru island – a policy discontinued by the Australian Government – Professor Nowak told journalists that doctors had said the youngsters were “among the most traumatized children they had ever seen”.

In north-east Syria, meanwhile, some 29,000 youths are being held in formerly Kurdish-dominated areas, suspected of being child soldiers or for having links with terrorism, Professor Nowak said.

“Many of these children were recruited (by ISIL extremists) or were brought by their parents as small children,” he noted.

“Some were even born in the camp and now are detained under very deplorable conditions,” Professor Nowak insisted, before adding that another 19,000 youngsters were also being held with their mothers.

According to the bumper study, which is commissioned only once every 10 years, at least 410,000 children are held every year in prisons and pre-trial detention facilities, where violence is “endemic”.

Many of these youngsters have been charged with truancy, disobedience and underage drinking, it says, noting that 94 per cent of all young detainees are boys, while another million are held in police custody every year.

In addition, at least 330,000 children in 80 countries are held in immigration detention yearly, while 670,000 children have been placed in institutions “that meet the legal definition of deprivation of liberty”.

States should detain ‘only as last resort’

Citing the Convention on the Rights to the Child – signed by all UN Member States bar the United States – Professor Nowak noted that detention of minors should be a last resort.

When detention is unavoidable, it should be for the shortest period of time, he maintained, adding that it was up to States to find non-custodial alternatives, notably by helping support families and child welfare services.

Highlighting the discrepancy between what Governments had agreed to under the Convention and the reality experienced by children facing detention, Professor Nowak urged States to put the youngsters first.

Member States should adopt specific children’s courts, he insisted, while police should keep youngsters and adults separated once they have been arrested, as could the courts.

Noting the disproportionate impact of detention on boys, who make up 94 per cent of all those held, Professor Nowak explained that girls were often released back to their families, even though they were responsible for one in three crimes.

The report, out just ahead of World Children’s Day on 20 November, also coincides with a report by UN Children’s Fund (UNICEF) marking 30 years of the Convention on the Rights of the Child.

While showing “historic gains overall for the world’s children” since the Convention was adopted, many of the poorest children “are yet to feel the impact”, according to The Convention on the Rights of the Child at a Crossroads.