Iranians of NZ became the voice of the protesters in Iran


The government of Iran shut down the internet nationwide amid protests against the hike in petrol prices. The share of internet users who had internet access was kept at 5 percent for 6 days and started to increase from Friday 24th of November. A population of 80 million was cut from the world for 6 days while the oppression was continuing in Iran.

Amid unprecedented absolute information blackout due to the internet shutdown, Iranian activists, artists, and regular people outside Iran played a considerable role to be the voice of the protesters inside Iran. The #IranProtests and #internet4iran were trending on Twitter and people were joining various demonstrations all around the world—including in New Zealand. 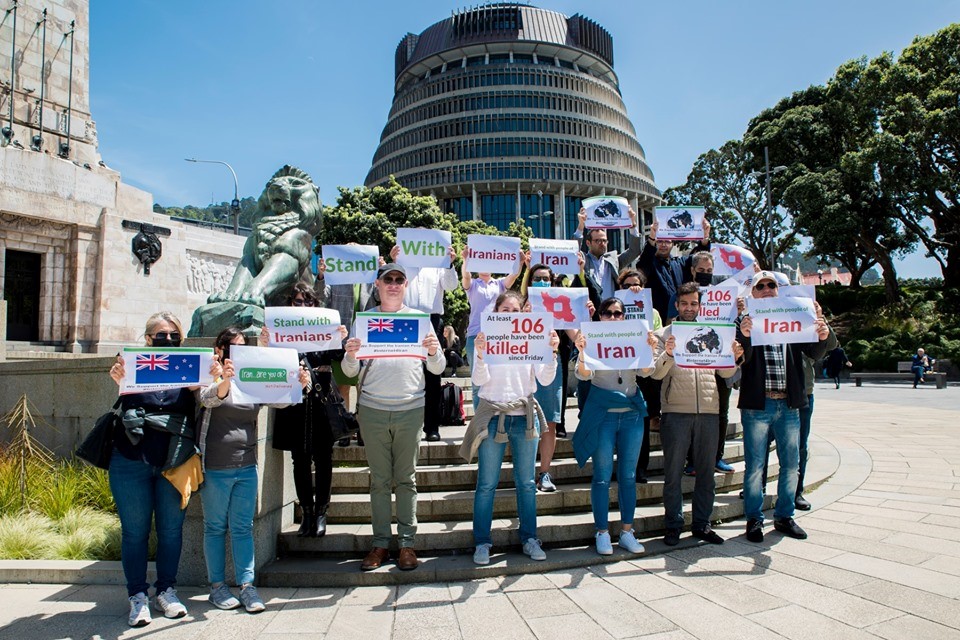 On Friday 24th of November, a number of Iranians participated in a silent demonstration in front of Parliament, demanding the Minister of Foreign Affairs, Rt Hon Winston Peters, to do as his Swedish counterpart did and notify the Iranian ambassador in Wellington of the violation of human rights in Iran. Then they marched on Lambton Quay Street trying to grab the Kiwi’s attention to Iran’s protests. The organizer of this demonstration answered, “that is one reason, among many others, and nothing justifies the killing of people in streets” when she was asked whether the protests in Iran are the results of the US sanctions. 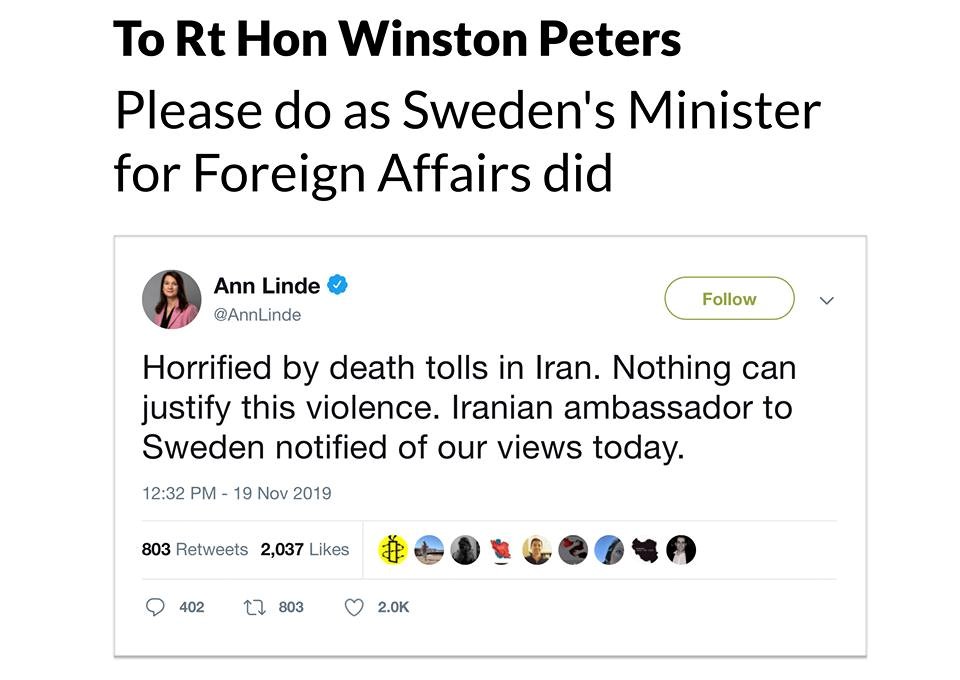 The Swedish Minister for Foreign Affairs tweeted on the fifth day of protests.

The day after this demonstration, on Saturday afternoon, the Iranians of Auckland got together in solidarity with the protesters in Iran in Queen Street and condemned the violation of human rights in Iran. The crowd in Auckland was using the former flag of Iran to show their disapproval of the Iran’s current regime. The organizer of the event said “regime change and support for Iranians” when she was asked what did they demand.

Iranians of Auckland got together in solidarity with the protesters.

On Friday 15th of November midnight, the government of Iran announced a dramatic increase in petrol prices with no prior notice. The new prices include a 50 percent increase in the price of the first 60 litres of petrol consumption per month and a 300 percent increase in the price of any extra purchases. Such an increase, and its foreseeable impact on the other expenses, are expected to be a further heavy weight on the shoulders of low- and middle-income households in Iran.

Next morning, in many cities across the country people took to the streets. The protests began peacefully by protesters stopping their cars in the highways. Yet, the regime did not tolerate them and protesters were confronted violently, which turned the peaceful protests into clashes. The videos and photos of the confrontations on the first day of protests were horrifying. So are the more recent footages of the people killed. The last updates from Amnesty International estimated the number of killed protesters to be at least 115 in less than a week. Activists believe the actual number is higher. 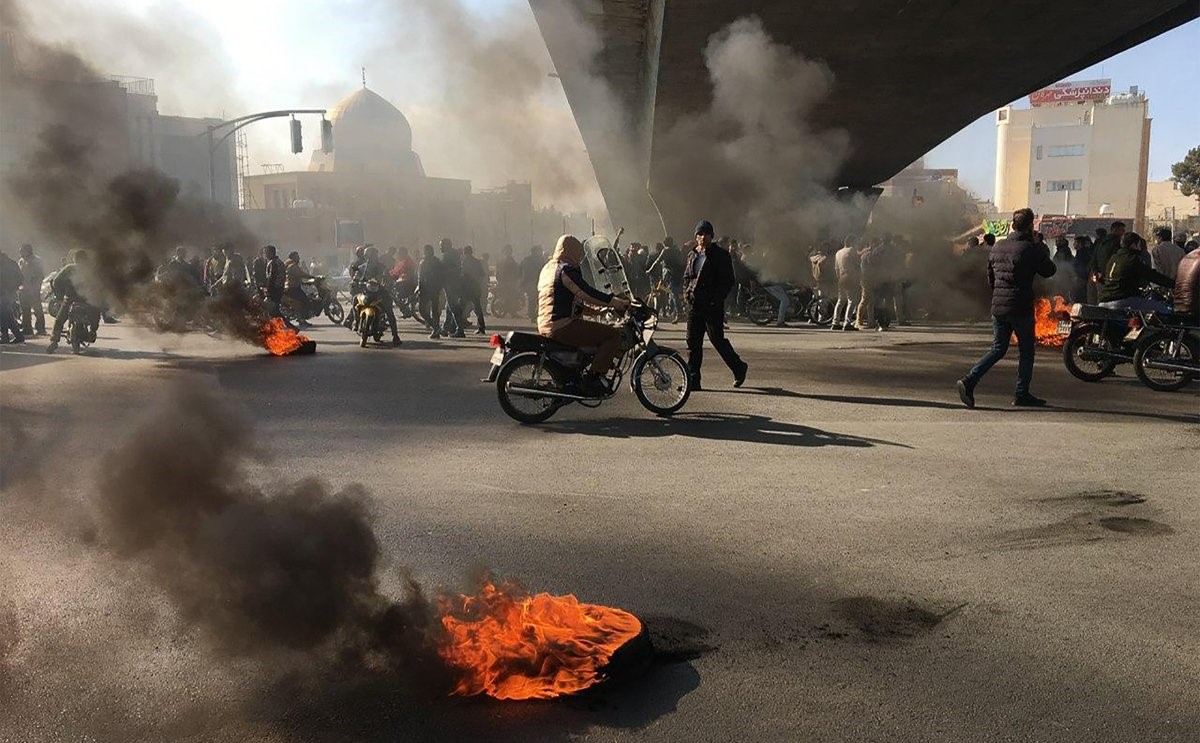 The Islamic Republic of Iran is facing its most challenging moments since the 1979 revolution. The Iranian “reformists” are losing their public support due to their disappointing performance. There is a growing dissatisfaction in response to the widespread corruption. Iranian women campaign against the compulsory Hijab and other violations of woman’s rights and disobey the sexist laws of the country. Protesters in Iraq and Lebanon chant against the regime’s supreme leader, and Iranians do not want their resources to be spent on militias in these countries. People’s affordability for basic goods and services is shrinking day by day as a result of the US sanctions and their patience shrinks with it. The clock is ticking and Iranians inside and outside of the country try to stay united and grab the world’s attention and support.

Gordon Campbell: On The Washington Riot And The Georgia Results

Hong Kong and Washington DC. On the same morning, the tyrants in power in Beijing and their counterpart in the White House have shown how they refuse to accept the legitimacy of any different points of view, and the prospect of losing power… More>>