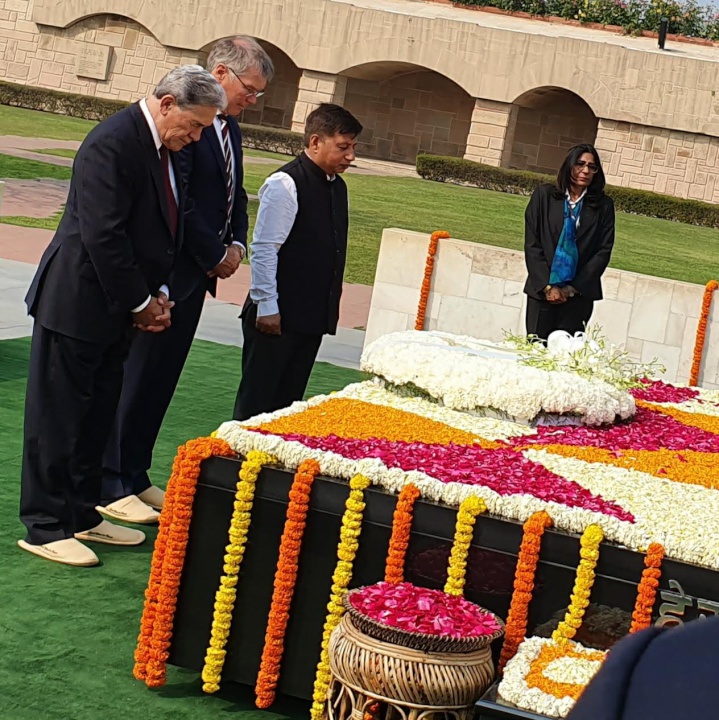 Tony Martin, Regional Director, NZTE and Ralph Hayes, Trade Commissioner South Asia, NZTE provided a brief of the mission to the delegates. Delegates come from a range of Industries starting with Aviation and on to F & B and onwards to Forestry. Industries represented both goods and services exporters.

Bharat Joshi, Author of “Navigating India, $18 trillion opportunity” provided an overview of the huge opportunity that India is. Bharat outlined the economic environment and stressed on how India has jumped up the ladder (from 140 to 77) in Ease of doing business Index. The conditions on the ground are changing and despite challenges, small steps are being taken to reform the economy by what he called “Cumulative incrementalism”.

He provided an example of how Suzuki invested in India before trading and that is becoming a successful strategy for many global corporates. Disruption in supply chains due to Corona Virus is forcing global companies to review and rethink and India can provide diversity in supply chains.

Hon David Parker addressed the delegates stressing that NZ and some like minded countries had not given up on India when it came to RCEP. He also said that gains made through RCEP can help in bilateral treaties.

Rt Hon Winston Peters said that India has got complexity and government needs to put resources and work harder for a good outcome. He also said that NZ must target opportunities outside such constraints.

The day ended with a networking reception at the residence of Grahame Morton, Acting High commissioner to India. High commission staff in India provided the audience with a Maori and an Indian welcome.

The event was attended by the trade delegation and guests, which included Amitabh Kant, CEO of Niti Aayog and business leaders.

India Mission 2020:
26 Feb 2020 (Day 2)
Day 2 started with a debrief by Tony Martin, Regional Director, NZTE and Ralph Hayes, Trade Commissioner South Asia, NZTE.
The highlight of the day was a visit to Niti Aayog, where we had a meeting with Amitabh Kant, CEO, Mr R Ramanan, Mission Director AIM (Atal Innovation mission).
Amitabh Kant said that he is an ambassador of NZ to India as he likes NZ, particularly when NZ is number 1 on Ease of doing business (EODB) Index. Mr Kant stressed on the structural reforms done so far with GST, Insolvency & Bankruptcy laws, Real estate laws and Direct benefit transfer being the top. He said that there are 1200 Million bio metrics completed and the same number of accounts opened. He highlighted how MNCs were setting up their R& D centres in Bengaluru and Hyderabad. He further said that clean-up of different sectors is over and is optimistic about future.
Mr Ramanan talked about the innovation and how they are starting at the school level and are transforming students to problem solvers. There are 5000 incubators in the country. He said that Aim can partner with NZ for innovation like they have done with Sweden, France, Germany and Australia.
The delegates were split into 2, one focussed on Aviation and the other on F & B.
F& B delegates were hosted by Hotel Leela Executive Chef Dharmen Makawana, who had prepared lunch for the Indian mission using NZ sourced ingredients.
Food Safety Standards Authority of India (FSSAI) provided a synopsis of import controls applicable to F & B sector. Dr Bhaskar from FSSAI expressed confidence that their standards will be level with Western World in the next 5 years.

There was an early morning start to the day with a visit to Azadpur Mandi, which is a national distribution centre and Asia’s largest wholesale market for Fruits and vegetables. It was an opportunity to see how NZ kiwifruit and apples are handled and auctioned in the market.
Tony Martin, Regional Director, NZTE and Ralph Hayes, Trade Commissioner South Asia, NZTE gave the delegates a debrief of the day’s proceedings.
David Parker and the business delegation went to FICCI for an event hosted by them. Mr Parker emphasised on how NZ companies were providing solutions-based services, which have gone well in the market. He also told the gathering that the issue of direct flights was raised by his counterpart Mr Piyush Goyal. Ms. Sangita Reddy, President FICCI thanked the delegation and in particular trade associations- New Zealand India Trade Alliance (NZITA) and INZBC for their role.
The delegation flew from Delhi to Mumbai.
A networking reception was held in Mumbai at Taj Lands hotel, where about 200 business leaders were present. Mr Sharad Pawar from NCP was present at the event, where the whole delegation presented the Maori song “Tutira Mai Nga Iwi”.

28 Feb 2020 (Day 4)
Tony Martin, Regional Director, NZTE and Ralph Hayes, Trade Commissioner South Asia, NZTE gave the delegates a debrief of the day’s proceedings.
The first event of the day was held at the Iconic BSE (formerly Bombay Stock Exchange), where the ministers started with a lamp lighting ceremony followed by ringing the bell, to start the day’s trading. The ministers spoke about the need to have closer business to business interactions.
The delegation then was hosted by Mahindra and Mahindra group (USD25 billion global enterprise) at their headquarters in Mumbai. Tech Mahindra and Mahindra Agri presented their businesses. Tech Mahindra has about 250 people on the ground in NZ and raised the issue of business visas taking too long for their employees.
Gateway House, a think tank headed by Neelam Deu, gave us very valuable insights into the working of the government. Mrs Deu stressed on the need to give Indo-Pacific, the prominence it deserves. She sighted the case of Australia, who are looking at India as the major player in Indo Pacific.
The consultants presented their great nuggets in terms of comparison between Chinese investments under BRI and Indian investments. Chinese investments in poor countries are political while as Indian Investments are purely private without any political objectives.

Another nugget of wisdom was how Governments are asking the private businesses to go slow on Technological advancements if it eliminates jobs in a big way. Governments agencies favour technology which creates greater reach and advancements in quality of life, as long it does not eliminate jobs in a significant way.
The next session was held with representatives of NZ companies (already doing business in India) and understand from them what works and what does not. The companies represented were: Fonterra, Fresco, Redesign, Staah, Quality NZ, Prepack, Sealegs, Zespri, RML Engineering, EKaga and 2 NZTE beachheads.
The last session morning was hosted by Peter Chrisp, CEO of NZTE with Minister David Parker in attendance. In this session, business delegates shared the insights, learnings, opportunities and risks from the visit.
Surinder Ogra, General Secretary NZITA, presented the below:
• Structural reforms completed by India in the last few years in Banking, Insolvency and Bankruptcy laws, Real Estate laws, Infrastructure, Transparency and Direct transfer schemes were once in a lifetime missions, that have been completed in a short time. The clean up has been completed and India can look towards future with a new enthusiasm. It is all the more important that NZ is there when Indian juggernaut takes off.
• NZ Inc needs to articulate “WHY NZ” in a more compelling way to resonate with the Indians.
• According to a McKinsey report, world trade in physical goods has consistently dropped in the last 20 years, while as world trade in Services has grown 4-5 times. This trend is evident in NZ India trade flows too. While we keep hammering for a bilateral FTA (which does not look very promising at the moment), Services exports have a better future in India.
• Innovation pact with India, as proposed by Mr Ramanan, Mission director for AIM (Atal Innovation mission) should be grabbed without any delays. Sweden, France, Germany and Australia have already taken the lead in this. Here is another great opportunity to work with India and put intangible value ahead of the tangibles which may follow from the pact.

While all delegates thanked the India Mission 2020 for the valuable learnings, almost everyone made a point that we need to be in the market regularly to make our presence felt.