We are the New Zealand Coalition for Inter-Korean Peace - a broad coalition of people from the local Korean community who have come together with the goal of advocating for the New Zealand Government to support a formal end to the Korean war as an important step towards peace on the Korean Peninsula.

On June 25 this year (this Friday), the Korean War will be 71 years old. It is important to remember that the Korean War never ended and was merely suspended in a state of armistice. Ending the war is the first step towards the sometimes unsurmountable-seeming goal of peaceful unification. Officially ending the Korean war is also the official position of our ally in this conflict, the South Korean government.

Locally, this issue is of interest to the more than 35,000 Korean people living in New Zealand. We also remember that 6000 New Zealand soldiers participated in combat in Korea as part of the United Nations forces, and countless New Zealand military personnel have been involved in maintaining the armistice.

New Zealand is well-placed to make a meaningful contribution to this peace movement, as a participant-country and as a member of the Asia-Pacific region.

We have written a statement calling for New Zealand’s Parliament and Government to become leaders in the global push to end the Korean War, which has the support of local Korean and civil society organisations. 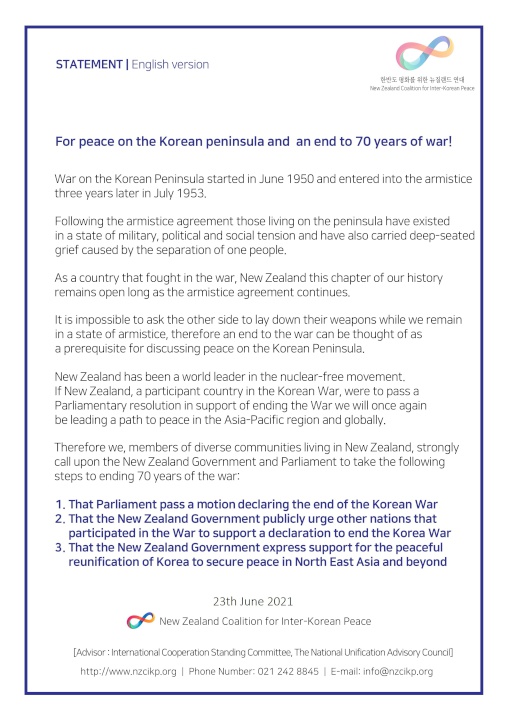