Underlining UN commitment to achieving a nuclear-free world, Secretary-General António Guterres has urged governments to strengthen efforts to make this goal a reality. 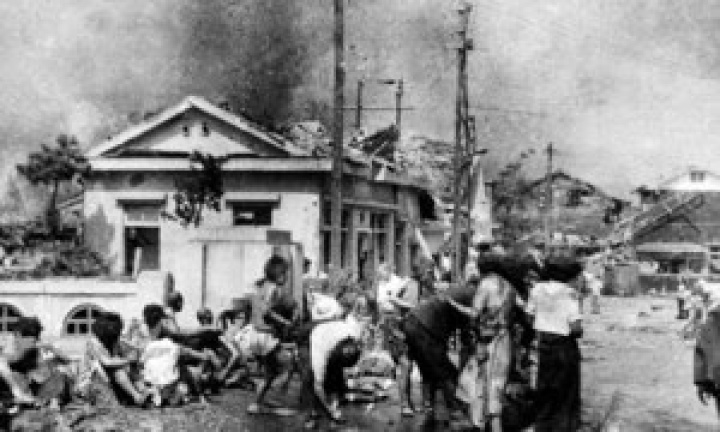 Injured civilians, having escaped the raging inferno, gathered on a pavement west of Miyuki-bashi in Hiroshima, Japan, about 11 a.m. on 6 August 1945. UN Photo/Yoshito Matsushige

“The only guarantee against the use of nuclear weapons is their total elimination”, he said in a video message to the Hiroshima Peace Memorial in Japan, held on Friday morning, local time.

The annual ceremony commemorates the 6 August 1945 atomic bombing of the city during the Second World War. The UN chief recalled the impact.

“On this day seventy-six years ago, a single nuclear weapon brought unimaginable suffering to the people of this city, killing tens of thousands of people instantly, tens of thousands in its aftermath, and many more in the following years,” he said.

Yet, he added that Hiroshima is defined not only by the tragedy unleashed on it.

“The unparalleled advocacy of its survivors, the hibakusha, is a testament to the resilience of the human spirit,” said the Secretary-General. “They have dedicated their lives to sharing their experiences and campaigning to make sure no-one else suffers their fate.”

Mr. Guterres said the UN shares the hibakusha’s vision of a world without nuclear weapons, which was the subject of the first-ever General Assembly resolution, passed just five months after the bombing, while the Treaty on the Prohibition of Nuclear Weapons entered into force this past January.

He expressed deep concern over the lack of progress towards achieving a nuclear-free world.

“States in possession of nuclear weapons have been modernizing their arsenals in recent years, sparking a new arms race. But the decisions by the Russian Federation and the United States to extend the New START treaty, and engage in a dialogue on arms control, are welcome first steps towards reducing the risk of nuclear catastrophe,” said Mr. Guterres.

The Secretary-General called on countries that possess nuclear weapons to adopt risk reduction measures, both individually and jointly, saying “we can never take the norm against the use of nuclear weapons for granted.”

He also urged governments to use the Tenth Review Conference of the Nuclear Non-Proliferation Treaty to strengthen their commitment to a nuclear-weapon-free world.

The conference was originally scheduled to begin in April 2020 but was postponed due to the COVID-19 pandemic. It should now be held no later than February 2022.