Mittens unlocks more hearts with Key to the City 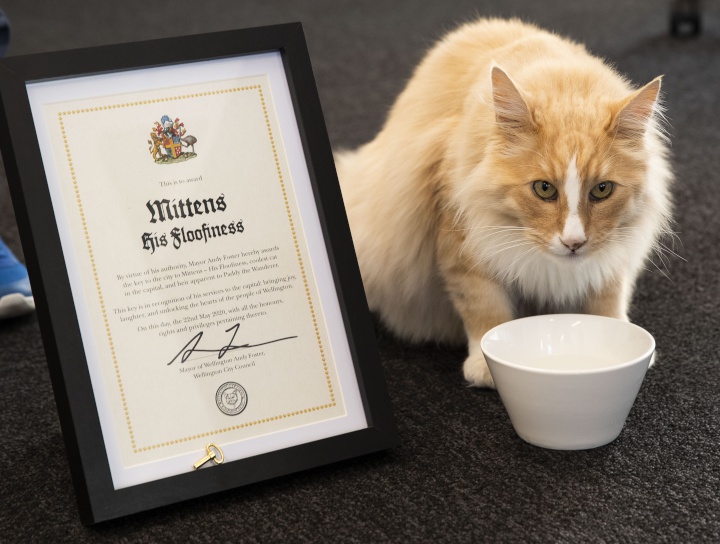 Mittens with key and certificate

Local celebrity cat Mittens has been awarded the highest honour of the capital with Mayor Andy Foster giving him the Key to the City at a small (Covid-safe) ceremony today.

Mittens has made his name by taking casual strolls through the busy streets of Te Aro and making himself at home wherever he pleases.

He received a certificate outlining the honours bestowed on him, and was given a miniature key for his collar by Mayor Foster, who was dressed in full regalia for the auspicious occasion.

His floofiness was accompanied by owner Silvio and Roelf Bruinsma (4 years-old), as he was bestowed the honour in recognition of bringing happiness, laughter and coolness to the capital – and putting the city on the map internationally with his feline antics.

The award was originally planned for March, and was delayed by the lockdown, but Silvio thought now was the ideal time for a good warm-hearted story.

“It’s a great community story at a time when Wellington needs it most, and reflects the positivity he has brought to the people he encounters on his adventures. Mittens has captured the heart of the city and kept smiles on the faces of many of his fans during lockdown – both here and abroad.”

Mayor Foster agrees: “The past few months have been some of the most difficult we’ve encountered, so we’re pleased to be able to provide some light relief during this challenging time.

“Mittens has featured in the Wellington Advent Calendar, made the news overseas, and is the focus of thousands of selfies on his own Facebook page.

“He’s famous for roaming the CBD visiting businesses and homes, bringing his brand of coolness wherever he goes – the Key to the City pretty much acknowledges his daily routines.”

Previous recipients of the Key to the City include triple-centurion cricketer Brendon McCullum, Sir Peter Jackson and Sir Richard Taylor.