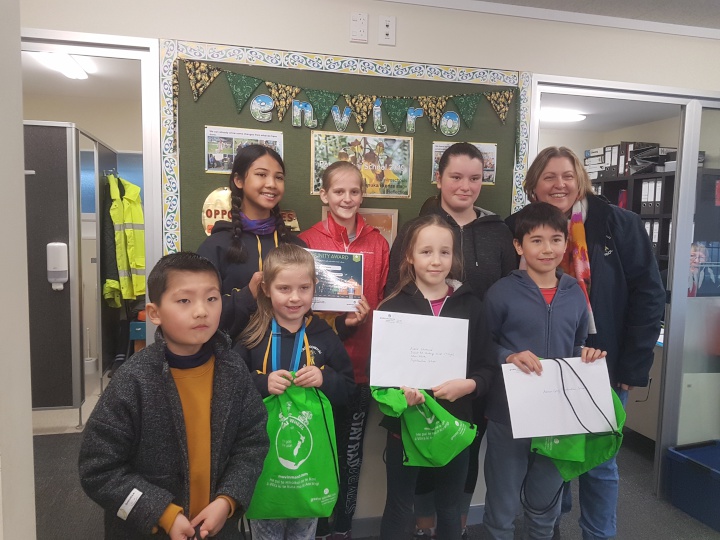 Movin’March Lead Teacher and Enviro Teacher Jill Clibborn with students from the Enviro Team (back row) and all the winners (front row) from left to right; Adam, Sophie, Amelie, Adrian

Other winners on the day were Sophie and Amelie, who took out prizes for Movin’March district art challenges, and lead teacher for Movin’March and Enviro Teacher Jill Clibborn who collected an award for Papakowhai School achieving the Porirua region’s highest participation.

“It’s a great award for a school that is really committed to the many benefits of active travel,” says Cr Brash.

The students recorded a massive 4278 walking and wheeling trips for just three weeks in March which equates to eight trips per student. This was not only the highest recorded for the Porirua area, but the third highest in the whole region.

“If every trip is around 500 m, that’s 2139 kms or like walking from Wellington to Auckland – four times”, says Cr Brash.

Normally a month-long event run by Greater Wellington Regional Council in partnership with local councils, this year’s Movin’March was cut to three weeks because of COVID-19, but still encouraged large numbers of kids in the region to walk, cycle and scoot to school.

Cr Brash said that the kids of Porirua showed their usual get-up and go with strong participation leading to great awareness of road safety and the importance of active transport.

Kirsty Barr, Travel Choice Coordinator at Greater Wellington said participation and feedback from this year’s Movin’March has been fantastic despite COVID-19.

“This year we had 129 schools in the region participate, which means we have almost 37,000 Year 0-8 students potentially participating in this fantastic free event. We counted nearly 89,000 walk or wheel trips throughout the region over March, which is only slightly fewer than last year, but over a shorter time period so we’re really happy with that result.

“Our goal now is to see how we can support schools in maintaining that enthusiasm throughout the year.”

Kirsty said a great start was that schools have begun to reap the benefits of more engagement with family and whānau, with greater interaction leading to enthusiastic support for Movin’March.

“The more kids we can get involved, the better. The physical and mental benefits of active transport for a generation that will live with climate change are immeasurable.”