A Mt Maunganui beachfront property that has options for three rental income streams on an elevated site looking over the white sand beach and ocean is on the market for sale.

The 1,146 square metre freehold site, with two houses, at 73A Oceanbeach Road is one of the most elevated properties along the beachfront suburb of Omanu and the expansive sea and island views have been enjoyed by the same family for more than 60-years.

With the passing of the original owners, the family members who inherited it are scattered around the country and decided now is the time to sell. It is being marketed for sale by auction on November 27 through Bayleys Mount Maunganui salespeople Janelle and Kay Ganley. It will settle with vacant possession.

Janelle Ganley said the property is being offered at land value as it is ideal for a new build.

“The houses have little value, although they could possibly be renovated and kept as three separate tenancies, with a part of the rear house for a new owner's use as it was for the original owners,” she said.

“It will be sought-after because of the low dunes in the Omanu stretch of the mount and elevation giving views of people walking along the beach and over the ocean to the islands.

“The family has good memories of holidays and wedding photos taken at the property. For a new owner there is an opportunity for a home and income as well as extended family beach holidays.”

Built in 1955, the rear house had a flat added in 1958, while a second dwelling facing the sea was erected at the front of the site in 1994. It has a one bedroom self-contained flat at ground level while the main part of the home features three bedrooms, two bathrooms and two living rooms. One tenant has lived at the property for 15 years.

At the rear house, the downstairs two bedroom flat had also been tenanted and the owners used a bedroom on the same level as the flat and three bedrooms and a living room on the top floor for their family holidays.

“There are plenty of options for the property from bowling both houses to renovating the two flats at the beachfront house and demolishing the rear house and building a new one on the site,” she said.

“There could also be the potential for further subdivision of the site, although advice would be needed from the Tauranga City Council to find out if it is possible.”

Any new houses on the existing Oceanbeach Road will add to the demand for property in Mt Maunganui and Papamoa. The overheated Auckland market has boosted the number of buyers for Bay of Plenty of property over the past few years and is still continuing.

In September, Tauranga City Council issued 98 residential building consents valued at $44,996,794, with $27,436,628 of that total new property in Mt Maunganui/Papamoa.

Over the same time, the number of building consents for new houses across New Zealand jumped 7.2 percent month-over-month to 3,318, following a 0.9 percent drop in the previous month. Building consents were 30.8 percent higher than the same month a year ago.

Two years ago, the Bay of Plenty's building boom crossed a major milestone, with councils approving $1 billion of construction in a calendar year for the first time. Building consent figures showed Tauranga City Council approved $777 million of new construction in 2017 and when added to the Western Bay of Plenty District Council's tally of $284million, the total came to $1.06billion.

While new building at Mt Maunganui is tempered by limited space, two years ago homes were earning $2000 more a year than the median annual income of $38,700 in Tauranga. Broken down, the average Mount Maunganui home earned a little more than $112 a day, compared to $106 a day for the average worker.

The reason for the increase in capital gain was the non-replicable land value in one of New Zealand's few destination spots that has a holiday feel.

The property for sale is above Omanu Beach, which is backed by a narrow grass and sand dune reserve. Behind this is a well-established residential area. The local community combined with visitors makes the beach active during the summer months. Swimmers are safe during low wave energy days, but conditions change between high and low tide. Omanu Beach has a lifeguard service during the summer. 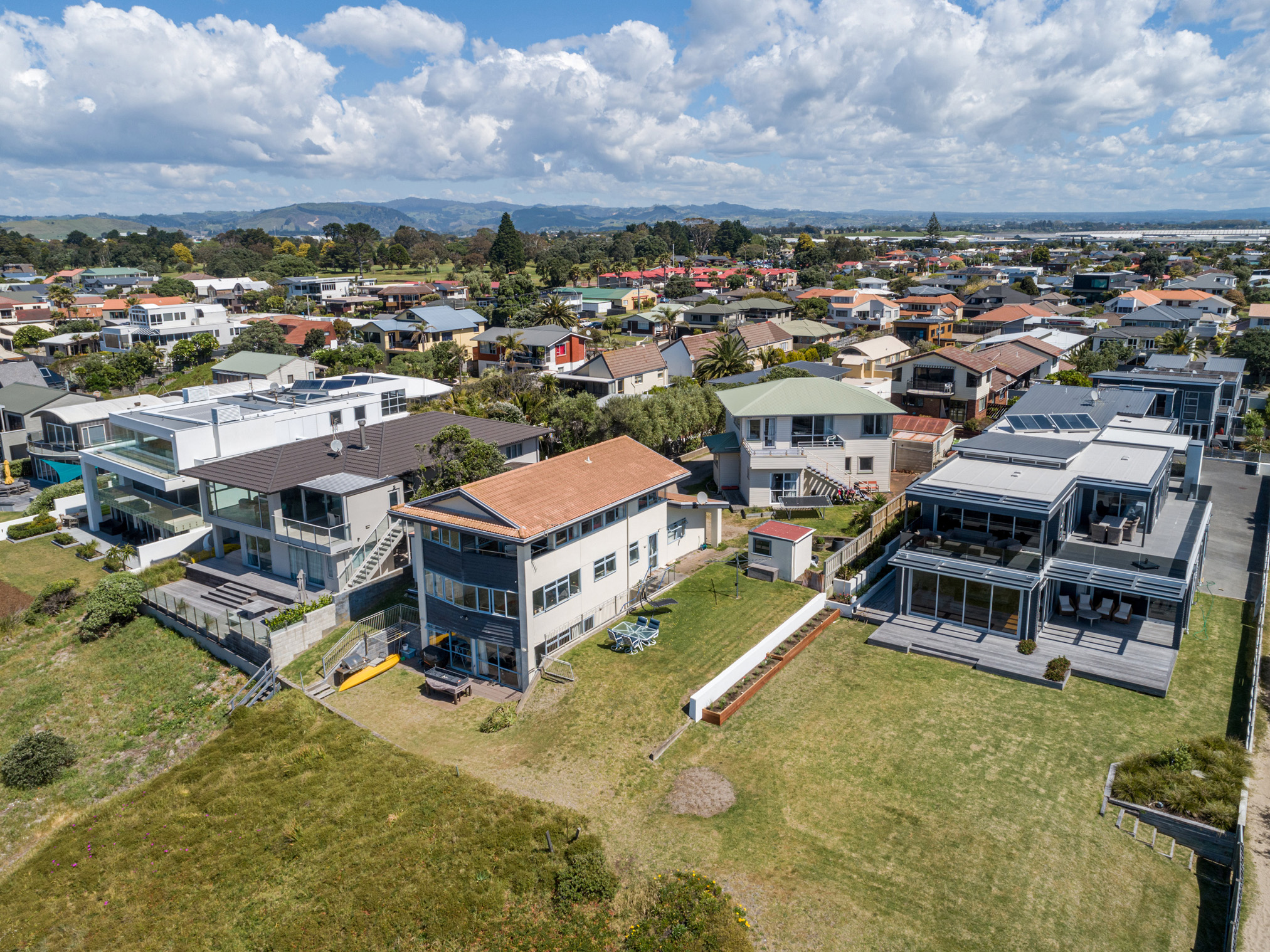