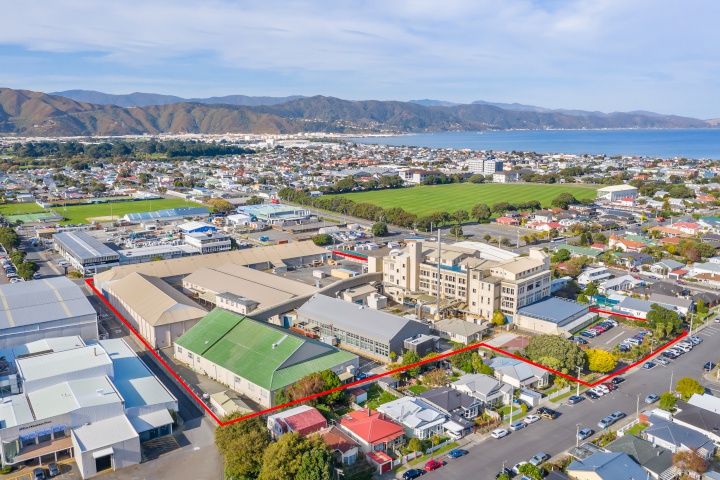 After confirming to staff and the wider Lower Hutt community that its tobacco factory in Petone would close later this year, Imperial Tobacco New Zealand Limited has placed the strategically-located landholding on the market for sale.

Imperial Tobacco will cease production in New Zealand at a yet-to-be confirmed date, with a staged shutdown and subsequent decommission of the site planned.

The 2.25-hectare flat site and substantial warehouse, manufacturing and office buildings, with dual frontages to Richmond and Bouverie Streets, Petone, is being marketed by Bayleys Wellington with interest closing on Wednesday, 24th June.

Grant Young and Fraser Press of Bayleys say the opportunity to acquire such a substantial flat site in the popular suburb will resonate with potential purchasers and ignite the interest of developers.

“The General Business zoning is inherently flexible and while the existing 15,396sqm purpose-built office, factory and warehouse buildings on-site could have relevance and be repurposed for other business use, there are multiple options for a prospective purchaser to explore,” says Young.

The property, known as 124-130 Richmond Street, Petone, occupies a well-positioned site bounded by residential housing to the Richmond Street frontage and light industrial/commercial usage to the Bouverie Street entrance. Commercial occupiers in the vicinity include Gilmours, Mitre 10 Mega, Ministry for Primary Industries and Plumbing World.

The existing buildings are of varying age, with additions and improvements made over the years.

With due Council process, the Imperial Tobacco property assets offers scope for redevelopment, occupation in its current form, add-value improvement and subdivision.

“The industrial sector has outperformed the wider market for a number of years now and appears to be well-insulated globally from pandemic-induced business pressures given the demand for logistics, storage and broader e-commerce supply chains,” explains Young.

“In the Wellington region, there is a well-documented shortage of industrial land and Petone has proved to be extremely popular for big box retail brands.

“The Imperial Tobacco site could meet some of that pent-up demand for industrial land, but the question remains whether that would be the best and highest use for the more-than two-hectare site.”

Retirement living and residential development are two other options that could be explored through Council avenues.

The Petone 2040 Spatial Plan, developed in partnership with Hutt City Council and available on its website, outlines a long-term vision and a potential planning framework for Petone and the nearby suburb of Moera.

It considers numerous development options to broaden the area’s appeal as a place to live, work and play and identifies a number of possible new residential and mixed-use growth zones, along with potential new public transport corridors.

Published in 2017, the Spatial Plan identifies North Park Village, an area around the existing Mitre 10 Mega store and including Fairfax’s print centre and the Imperial Tobacco site, as one to consider for brownfield development, particularly if proposed transport initiatives, such as the Cross Valley Link are progressed.

“The Plan mentions that in its current guise and usage, Imperial Tobacco’s site reduces east-west permeability for any prosed gentrification of the wider area referred to as North Park,” says Press.

“Most of the land in the area outlined as the North Park precinct is privately-owned and a comprehensive redevelopment plan would need to be formulated to get stakeholders onboard.

“However, the availability on the open market of the Imperial Tobacco site will ring development bells for well-capitalised movers and shakers who recognise the intrinsic potential of rezoning/changed use some time down the track.”

Petone has a proud manufacturing history but has metamorphosed to a popular residential and boutique retail destination suburb following the closure of the Gear Meat Works, various motor vehicle assembly plants and carpet manufacturing operations that once defined the area.

The impressive corporate compound occupied by Imperial Tobacco has been an important part of the local Petone economy for around 90 years, although this company has owned the site since the late-1990s.

“Our understanding is that the original owners of the property and the first to manufacture cigarettes in New Zealand, W.D and H.O Wills Limited, moved their operation to the Petone site around 1930, after establishing their business in Wellington in 1919 and needing to expand,” says Press.

“By the 1940s, the Petone compound was lauded as being a very desirable place to work with spacious grounds, a nursery to propagate plants for the park-like gardens, a golf putting green, deck tennis courts on top of the factory building, a sports’ mistress to coordinate recreational activities for staff and a canteen offering panoramic views from its upper level windows.”

W.D and H.O Wills Limited job advertisements of the time targeted ‘Hutt Valley womenfolk’ claiming it could offer ‘nice work for nimble fingers’ and the factory employed significant numbers of locals – across many generations.