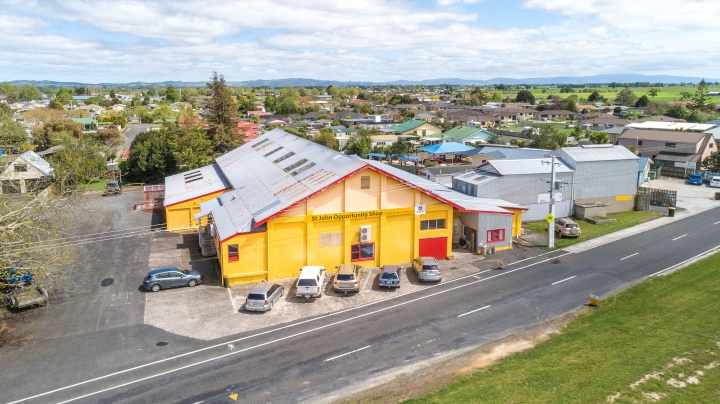 A former dairy factory and a precious stones retail outlet now home to a town’s post office mail sorting centre and neighbouring charity op’ shop have been placed on the market for sale.

The property at 21 River Road in the Waikato township of Ngatea began its life in 1919 as the area’s butter and dairy factory operating under the Thames Valley Co-op Company brand.

Butter produced at the plant was transported by river and then by sea to Auckland in small vessels. As production increased, the demand for cheese also increased and a cheese plant was established within the site in 1939. Milk was delivered in cans by horse and cart from within a radius of approximately five kilometres. The plant closed in the 1960s.

For several decades after the 1970s, the River Road site was occupied by precious stones processor and retailer Wilderness Gems which sold raw and processed gems and jewelry.

The 4,384 square metres of freehold land and approximately 1,200-square metres of buildings at 21 River Road are now being marketed for sale at auction on December 3 through Bayleys Hamilton. Salesperson Josh Smith said the property could be viewed as both a split risk tenanted investment, or as potential new premises for an owner/occupier.

“With such a broad range of tenant activities operating from within the premises, any new owner/occupier of the property could schedule their move into the site at some stage in the future to dovetail behind a departure by one of the current tenants,” Smith said.

Located some 200 metres from Ngatea’s main arterial route, the property at 21 River Road with its prominent street frontage contains a large portion of undeveloped space – much of which is utilised for tenant car parking, and some of which is in grassed lawn space. The location is zoned Commercial 8A under the Hauraki District Council plan.

“The configuration of the existing buildings on site, and the proliferation of both greenfield space and car parking areas, mean that subject to council consenting, the property could easily be redeveloped at some point in the future,” Smith said.

“Options along these lines could range from an enclave of terraced tradie workshops and warehousing spaces with the potential of on-site commercial office floorspace, through to a large warehousing amenity or factory-orientated workspace.

“Alternatively, the expanse of unused car parking space around the peripheral edges of the premises could be used as storage for machinery, equipment or shipping containers.

“Pursuing that avenue further, it has already been mooted that the vacant portion of the property could be developed into a self-storage facility to run alongside the existing tenancies.”

The buildings at 21 River Road have a new build standards rating of 33 percent. All of the tenants located at the address have their own entrances to the building. Smith said that most of the tenancies had been working from the site for at least five years – during which time the residential flat had never been vacant.