A piece of one of central Auckland’s most storied buildings has gone up for sale with versatile options for owner-occupiers and add-value commercial property investors. 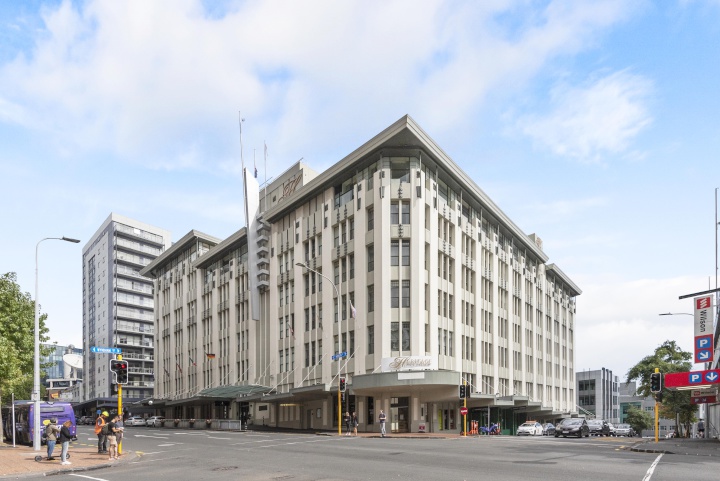 Constructed around 1920 on the corner of Wyndham and Hobson streets, the seven-storey building housed the original Farmers department store. Opened by then Governor General Lord Jellicoe, it was the nation’s largest and grandest store with five acres of floor space, tearooms and a rooftop playground – along with Hector, its famed talking cockatoo, who greeted customers for 43 years until the late 1970s.

For years the building was a focal point for Auckland’s annual Santa parade which, from the early 1960s, was watched over by giant Santa, reindeer and sled installations on the building’s exterior.

The store closed in 1991 and the building took on a new life seven years later as home to one of the city’s top hotels, the Heritage Auckland.

The commercial unit for sale at 72G Wyndham Street forms part of the retail floor in the building. It is being marketed for sale with vacant possession through Bayleys Auckland Central. Sale will be by way of a tender (unless sold prior) closing at 4pm on Thursday 3 June.

Salespeople Phil Haydock, James Were and Dean Budd said the stratum in freehold-titled unit had a floor area of approximately 650 square metres and would lend itself well to being split into separate tenancies.

“This would offer the ability for a buyer to occupy with rental income on the side, or for an investor to establish a diversified cashflow from multiple tenants,” Mr Haydock said.

“Either of these options would help a new owner take maximum advantage of this prized and convenient CBD location.

The property has a seismic rating of 70 percent of new building standard. It sits within the Business – City Centre zone under the Auckland Unitary Plan, allowing for a diversity of activities including commercial, residential and retail.

Mr Were said new owners and tenants would benefit from the building’s prestige and prominence on one of Auckland’s highest-profile corner sites.

“The surrounding area of the CBD is home to some of Auckland’s most important office towers including the ANZ Centre on Albert Street and the new PwC Tower at Commercial Bay.

“This superb location offers occupiers easily walkable access to the vibrant Britomart precinct, the Commercial Bay Shopping Centre, Queen Street, SkyCity and the busy bars and restaurants of the viaduct, as well as the future New Zealand International Convention Centre,” said Mr Were.

Mr Budd said the Wyndham Street property was close to key motorway interchanges and about an eight-minute walk from the Britomart Transport Centre with its concentration of regional bus, train and ferry links.

“The CRL is the country’s largest-ever transport infrastructure project. It is set to double the population living within a half-hour commute of the CBD when it opens in 2024, greatly boosting CBD businesses’ access to customer and worker catchments,” said Mr Budd.