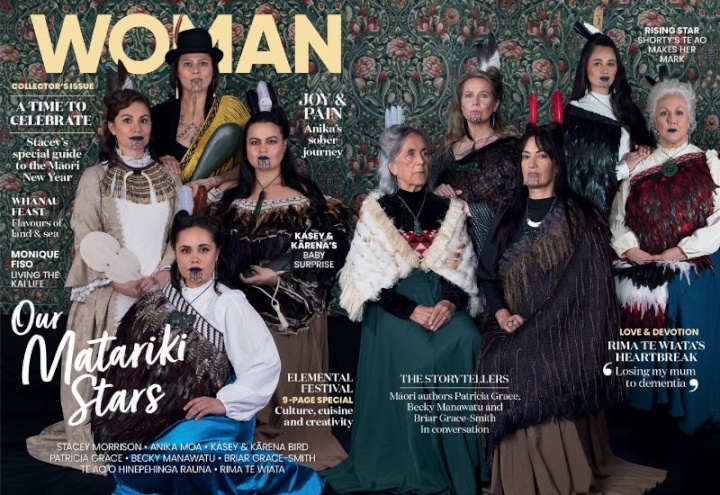 Vienna and Taaniko Nordrom of Soldiers Rd Portraits were commissioned to style and shoot the cover. The sisters-in-law's photography is inspired by turn of the 19th century, colonial portraiture of Māori, recreating vintage style photographs with a modern twist.

Morrison says, “I’m grateful to be a part of this special issue of Woman, which was made in the spirit of Matariki – in partnership, reflection and hope for the future. Sido is a masterful storyteller, and it was my joy to support her vision for this issue and offer ideas, practices and kinship. Knowledge of Matariki was nearly erased in our country, but its resurgence means this ancient tradition will be carried by all New Zealanders who look to the night sky, reflect and refocus.”

Kitchin says, “All New Zealanders will be celebrating Matariki as a public holiday on June 24 next year, and I see this as an important opportunity to learn more about the traditions of this special time. This issue is very much a collaboration and I’m especially thankful to Stacey for her guidance and sharing of knowledge on the significance of Matariki, the wāhine toa who posed for our portraits and shared their stories, and the incredible photography by Soldiers Rd Portraits.”

Photographer Taaniko Nordstrom says: “Matariki is a time to celebrate and give thanks, to acknowledge the stars that guided our ancestors and to recognise those who have gone before us. With these celebrations in mind, we knew our cultural portraiture style would be the perfect fit for this issue, depicting nine outstanding wahine Māori in the light of our tūpuna. Acknowledging our loved ones who have passed and honouring the legacy they leave behind is one of the main focusses of our portrait kaupapa, which relies on whakawhanaungatanga and connection with cultural identity and whakapapa to create a meaningful experience for not only Māori, but tauiwi as well.”

Vienna Nordstrom adds: “We were honoured to be asked to be part of this amazing issue of Woman, celebrating not only Matariki, but also wāhine Māori. It was a fantastic opportunity for us as a small Māori business to be able to work with all the women involved in the design of this issue. As a grass roots business made up of just the two of us, being able to work alongside and be guided by such capable and knowledgeable women has contributed to our personal and business growth, and we loved sharing our kaupapa and whakaaro with them as well.”

The Matariki issue of Woman – which is on-sale nationwide from today – features an open and honest interview with Anika Moa on her self-care journey since being diagnosed with diabetes and going sober; Kasey and Kārena Bird share their family’s happy news – a baby is on the way for Kasey, who married her teen sweetheart in April; Stacey Morrison writes a first person piece on the significance of Matariki; Rima Te Wiata discusses her mother’s eight-year struggle with dementia before she passed away in 2017; Shortland Street and Head High actress Te Ao o Hinepehinga Rauna reveals her new role in an upcoming US series being filmed in Mexico; and Patricia Grace, Briar-Grace Smith and Becky Manawatu discuss what it means to be a storyteller in Aotearoa today.