The “Golden Triangle” regions of Auckland, Waikato, and Bay of Plenty continue to dominate property development activity in New Zealand, accounting for close to 60 per cent of the annual national building consents issued. 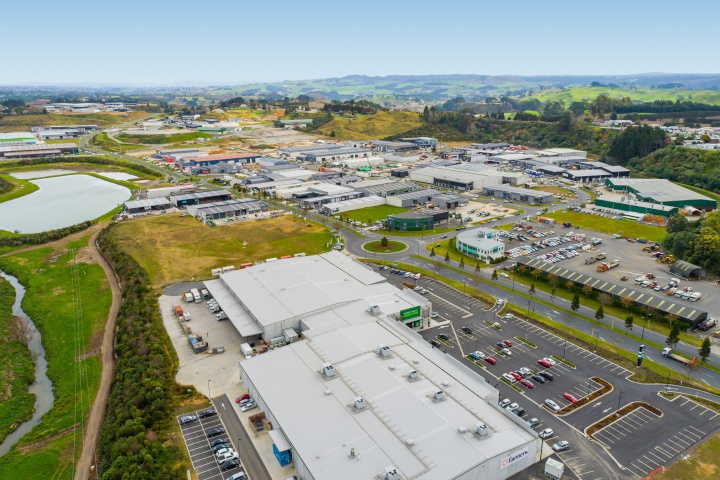 Tauranga’s Tauriko Business Estate… filling up fast.
Bayleys Research’s latest Golden Triangle overview, part of its Infrastructure series of reports, underlines the major contribution the three provinces make to New Zealand’s productivity and GDP. Home to just over half of New Zealand’s population (50.18%), they accounted for 52.4% of New Zealand’s GDP growth in the year to March 2021 and $11.978 billion or 57.12 per cent of the value of all building consents issued. That represents an increase of over $1 billion in the last two years - from the $10.7 billion of building consents issued in 2019.

Building consents within the Golden Triangle have outpaced the rest of New Zealand for over a decade, with an average compounded annual growth of 10.5% since 2010 compared with 7.02 per cent for the rest of the country.

“The strong development activity within the Golden Triangle has been across the whole property spectrum, with residential and commercial and industrial buildings being constructed in record-breaking volumes,” says Ryan Johnson, Bayleys national director commercial and industrial. “While there has been some short-term curtailment of new building activity because of Covid 19 lockdowns, particularly in Auckland, in the medium to longer term we would expect the Golden Triangle’s dominance as New Zealand’s economic powerhouse to continue to gather momentum. This will add further impetus to the already high levels of property development and investment activity in the region.”

Johnson says the industrial sector has been leading non-residential building development activity, fuelled by the rapid growth in e-commerce and the associated demand for logistics premises. Over the last decade, annual industrial building consents issued have more than doubled in the Golden Triangle from under 300,000 sqm of space in 2012 to 650,000 square metres in the 12 months to March 31, 2021. This latest figure represents 55.7% of all industrial consents issued nationally in 2021

There was close to a 100 per cent rise in Bay of Plenty industrial consents to 135,816 sqm, a figure which has only been surpassed only once since 1991,says Mark Walton, Bayleys Tauranga based commercial and industrial sales manager. A major contributor to this has been the building consent granted earlier this year which has enabled construction to commence on Winstone Wallboard’s new $400 million plasterboard manufacturing and distribution facility in the Tauriko Business Estate in Tauranga.

Walton says the 200-hectare Tauriko estate, containing one of Australasia’s largest industrial subdivisions, is continuing to drive much of the current industrial building activity in Tauranga but its success means it too is rapidly running out of land for future development.

“Design build opportunities are filling up and industrial occupiers will need to act quickly to secure opportunities, particularly for large footprints. We have a chronic shortage of business zoned land in Tauranga and the Western Bay of Plenty. With strong demand from businesses wanting to expand and grow, additional commercial and industrial zoned land is very much required in a rapidly growing and under pressure Tauranga city.”

Walton says the Rangiuru Business Park located close to Te Puke will open up approximately 178 hectares of land for development in four stages. “It is designed to allow for the construction of large-footprint, high quality industrial facilities, underpinned by reasonable land prices, with earthworks on the first stage of approximately 35 hectares scheduled to start shortly. It will provide excellent access to the Golden Triangle, with a dedicated interchange connecting it to the Tauranga Eastern Link expressway and a direct rail link also to the Port of Tauranga.”

In the Waikato, much of the region’s new industrial development continues to be undertaken in Te Rapa, north Hamilton, says Bayleys Waikato’s commercial manager David Cashmore, because of its available land and easy access to Golden Triangle motorway connections to both Auckland and the Bay of Plenty. There has been rapid uptake of sites in new subdivisions on the city’s northern boundary, such as the 60-hectare Te Rapa Gateway located alongside State Highway One.

However, Cashmore says the biggest game changer for Hamilton will be the Ruakura Superhub being developed alongside the Waikato Expressway by Tainui Group Holdings. It encompasses a 490-hectare master-planned community, with earthworks underway on the 92-hectare first stage which will include an inland port being developed in a joint venture with the Port of Tauranga and logistics and industrial precincts. A 5,000 sqm new regional hub for PBT (formerly Peter Baker Transport) is the first logistics facility to be announced and is scheduled for completion in the third quarter of next year.

“The impact of this massive 30-year project will be immense and is estimated to create up to 12,000 jobs when fully developed with an annual $5 billion contribution to the economy,” says Mr Cashmore.