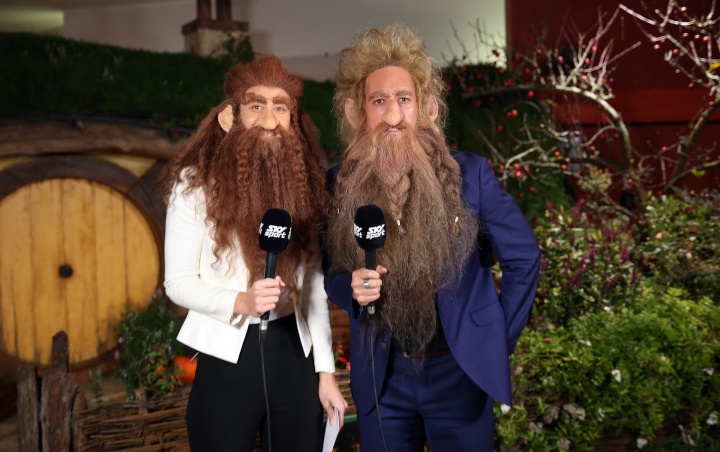 For the first time in franchise netball history, the Waikato Bay of Plenty Magic team wore a special one-off Hobbiton themed dress for the June 2018 game for the Hobbiton Movie Set Cup, a carved wooden trophy.

The experience was repeated in 2019.

“Innovation is a really important part of regional economic development,” Hallett said, as he presented the award at Claudelands Event Centre on November 15.

“Innovation is what makes our region prosper and grow. Innovation is a core part of Company-X. It’s what drives us and that’s the reason we are proud to sponsor the Innovation Award,” Hallett said.

Claudelands Event Centre, which hosted the Waikato Bay of Plenty Magic and Northern Mystics game, was flanked by Hobbiton Movie Set vehicles and the foyer had a Hobbit hole and garden built within it. A poster was given to all attendees, a dozen Hobbiton Movie Set staff and fiddler interacted with attendees in costume.

Even the Sky Sports commentators entered into the spirit of the day, dressing as elves and dwarfs.

Westpac Waikato Business Awards judges described Netball Waikato Bay of Plenty as an “outstanding entrant, who took a near loss of a sponsorship revenue stream and turned it into one of the best promotion/events/games in their organisation's and in NZ sporting club history”.

They said the Hobbiton game was a “turning point in their revenue and profitability, which has opened up more doors and new sponsors who now see the club as a ‘we can do it’ opportunity.

“A great case study for pushing marketing boundaries and reaping the rewards.

West said Netball Waikato Bay of Plenty was delighted and a little stunned by the award.

“To be a category winner with the calibre of Waikato businesses in the mix, is a massive and quite humbling achievement for us,” West said.

“Partnering with Hobbiton Movie Set has been a revelation for us and has helped in our drive to be an innovative, flexible and can-do organisation. They, along with the team at Claudelands Arena, have helped take Magic home games to another level in the past couple of years, and we look forward to creating even better game-day experiences for our supporters and partners.”

The award recognised the work Company-X had done in developing a voice-activated auditing application for state-owned-enterprise AsureQuality.

The application runs on the RealWear HMT-1 head-mounted tablet and enables AsureQuality’s inspectors to comment, take photographs and capture video during an inspection by voice alone.

“With our strong focus on innovation and technology, AsureQuality has enjoyed collaborating with Company-X on various projects,” van Enckevort said. “They always strive to deliver the right solutions for our needs. It’s great to have their achievements, including our voice-activated auditing application, recognised – congratulations to the team!”

“It shows that Company-X is out there, on the edge, when it comes to developing new solutions,” Bauerfeind said.

“We have a really good feel of the augmented and virtual reality segment of the industry and what works and what doesn’t. We are able to analyse, pivot and keep our fingers on the pulse as we help bring efficiencies to business.”

Company-X co-founder and director Jeremy Hughes said the work done for AsureQuality was a great example of how the evolving and highly specialised technology could add amazing value to a business.

Hallett said: “Winning a Reseller News Innovation Award really does demonstrate that we are delivering on our promise of Silicon Valley savvy with a Kiwi can-do attitude.”

The team has grown to more than 50 New Zealand-based software specialists, with only the best and brightest passing our interview and assessment process.

The Company-X team prides itself with experience in a wide range of technologies and languages and loves challenging problems.

Company-X is the Australasian reseller of RealWear head mounted tablets.

Company-X has won many awards:

• The Service Excellence and Global Operator awards at the Westpac Waikato Business Awards in 2018.

• The Roading Asset Management Innovation Award at the Road Infrastructure Management Forum in 2017 for the One Network Road Classification Performance Measures Reporting Tool.