Hatching a Plan to Save Kiwi 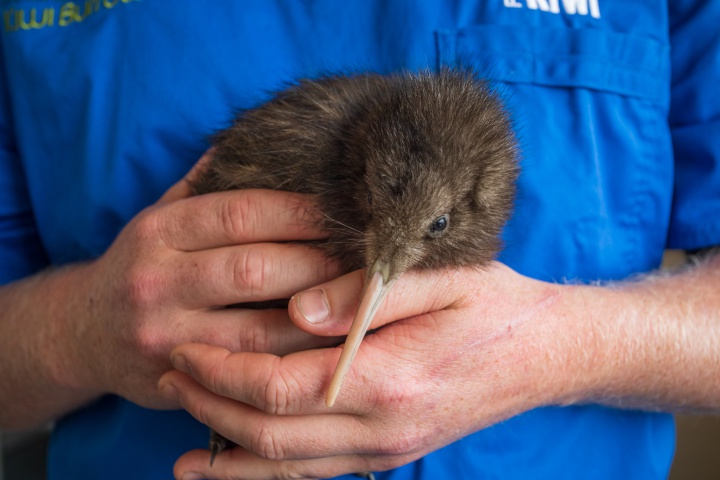 Crombie Lockwood First Chick
A new state of the art kiwi hatching facility, opening today, will dramatically ramp up kiwi numbers in the fight to save kiwi from extinction.

The Crombie Lockwood Kiwi Burrow, located within the world-class Wairakei Golf Course, North of Taupō, is the only incubation facility in New Zealand inside a predator free area. The purpose-built incubation facility can hatch and brood around 150 kiwi chicks every year once operating at capacity, and will nearly double the number of eggs incubated annually in the North Island.

As part of Kiwis for kiwi’s strategy, the facility has been specifically designed to incubate kiwi eggs and hold the young chicks until around three to four weeks old before being released to kōhanga kiwi, predator-free sites. These are usually fenced areas or islands which provide a nursery for the permanent population. The chicks will grow, find a partner, breed and in the future, when the site nears capacity, their offspring, once one kilogram, will be removed and released to safe places in the wild.

Kiwis for kiwi Executive Director, Michelle Impey, said the Crombie Lockwood Kiwi Burrow will help maximise the work of Operation Nest Egg which involves lifting eggs from monitored kiwi in the wild, incubating in captivity and rearing the chick in a predator-free site until it is deemed “stoat safe” before being returned to the wild.

“We are using a proven formula that works to deliver on the national strategy to turn the kiwi population’s two percent decline into a two percent increase. By providing a launch pad to scale up production, it will allow us to do in 5-10 years what would have taken 50 years or more. This unique facility will be the conduit to achieving our goal of taking kiwi from endangered to everywhere,” said Ms Impey.

The dedicated kiwi incubation, hatching and brooding facility has been built to best practice standards and will be staffed by kiwi husbandry experts. Claire Travers previously led the team at The National Kiwi Hatchery for 18 years and is known as the ‘Godmother’ of kiwi egg incubation. Alongside Claire will be a number of specialist kiwi husbandry experts from around New Zealand.

New Zealand is precariously balanced on a knife edge with its kiwi population, says Sir Rob Fenwick, previous chair of Kiwis for kiwi and now patron.

“Kiwi are facing the point of no return if support is not ramped up. Fortunately, thanks to many organisations and communities that are giving their time, energy and funds to provide safe habitat, there is hope. Providing facilities that can seriously increase the production of kiwi chicks is the key to increasing numbers and genetic diversity, both of which are critical to avoid extinction. As Predator Free 2050 efforts ramp up, there will be even more predator controlled and protected areas waiting for new kiwi populations to be introduced. This gives us a real shot at turning around the two per cent decline,” said Sir Rob.

Eggs delivered to the facility will initially be sourced from the Tongariro/Taranaki/Whanganui regions and once old enough, will be released to Sanctuary Mountain Maungatautari, the kōhanga site for Western brown kiwi. As work scales up eggs will gradually arrive from the Eastern North Island and possibly Coromandel.

The Crombie Lockwood Burrow has been made possible through ongoing support from insurance brokers, Crombie Lockwood. Wairakei Golf and Sanctuary owner, Gary Lane, a long-term supporter of Kiwis for kiwi, has provided the site for the Kiwi Burrow and underwritten the cost of the build. Nonprofit KiwiSaver provider, Simplicity, is funding the fit-out which includes incubators, brooder boxes and all of the supporting equipment required from electronic scales to bowls for feeding the chicks.

About Kiwis for Kiwi

Kiwis for kiwi is the country’s national charity dedicated to protecting kiwi. Working in partnership with the Department of Conservation we raise and distribute funds to kiwi conservation projects across New Zealand with a vision is to take kiwi from endangered to everywhere.