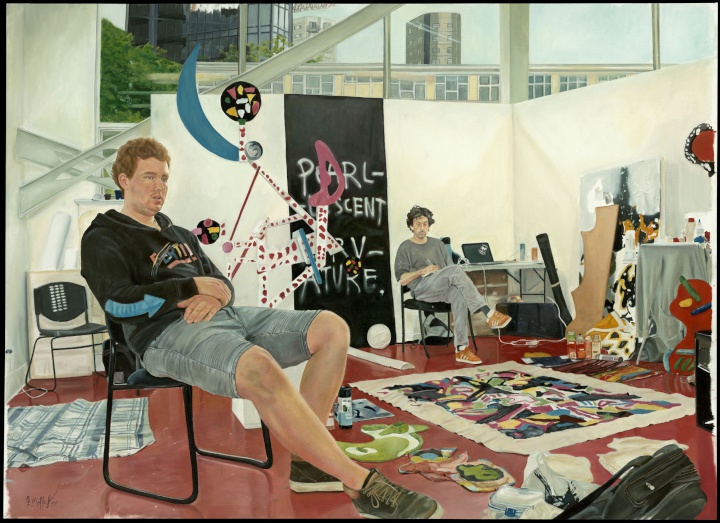 Portraits featuring real hair, cats and LGBTQ pride are just some of the interesting works shortlisted in the prestigious 2020 Adam Portraiture Award.

Entries from all over the country include portraits of famous New Zealanders such as actor and model Colin Matura-Jeffree, musician Peter Gutteridge, founder of the World of Wearable Art Show Dame Suzie Moncrieff, and comedian Rose Catherine Lettitia Matefeo, along with self-portraits and works depicting the painters’ family members and friends.

The biennial award, with a first prize of $20,000, generously sponsored by The Adam Foundation and presented by The New Zealand Portrait Gallery Te Pūkenga Whakaata, attracted a record 373 entries, of which 51 have been selected.

The competition highlights the power of portraiture and celebrates New Zealanders and the portrait painters who represent them. Anyone can apply to enter this anonymously-selected biennial painting prize, as long as the artist and subject are a New Zealand resident or citizen.

Entries have been received throughout New Zealand from as far north as Whangarei to as far south as Dunedin, including entries from New Zealand artists based in Germany, United Kingdom and Australia.

Shortlisted works range in size from the small (21cm x 28cm) to the very large (1.8m x 2.5m). There were several portraits utilising expected materials such as oil and acrylic paintings while other artists chose to paint on a road sign, and another included the sitter’s hair which framed the portrait. Another interesting feature of the entries include a trend towards realism - often with a photorealistic face contrasted with an abstract or 'unfinished' background

The winner of the competition and recipient of a $20,000 cash prize will be selected by the judges at the start of the public exhibition showcasing all finalists’ works at the New Zealand Portrait Gallery at Shed 11 on Wellington’s waterfront. An additional prize of $2,500 will be awarded for the runner up alongside another $2,500 prize for the People’s Choice, awarded at the end of the Adam Portraiture Award exhibition.

For the first time in the competition’s history the gallery invited a New Zealand judge to join an international judge to examine the entries and decide on the finalists and winner. Dr Linda Tyler Associate Professor, Art History and Museums and Cultural Heritage, at the University of Auckland, worked alongside international judge Karen Quinlan, Director National Portrait Gallery of Australia to select the shortlist over the period of several weeks.

“What was most impressive about this year’s entries was the huge diversity of subjects depicted. The great and the good featured but so did the local motor mechanic and quite a number of kindly looking nanas. Photo realism remains popular, but as judges we were really struck by those artists who hadn’t used a camera, working from sketches or memory, and sometimes creating fantasy pieces that were imaginative reconstructions of an individual, giving you a real insight into character and personality.”

“It will be interesting to have a New Zealand judge for the first time alongside an international judge because they will bring local knowledge and context to the decision-making process. Whoever wins an art prize always depends as much on who is making the decision, as it does on the artist and their work. I can’t wait to see the differing approaches and themes that emerge from the gathering of this year’s Adam Portraiture Award finalists,” says Jaenine Parkinson, Director of the New Zealand Portrait Gallery.

The winning submission will be announced on 26 February 2020 and the exhibition will run at the New Zealand Portrait Gallery Te Pūkenga Whakata in Shed 11 on Wellington’s waterfront from 27 February to 22 May 2020 after this, the exhibition will be touring nationally. Most of the artworks will be for sale giving admirers and collectors the opportunity to purchase some wonderful pieces which are unlikely to be seen again, while the New Zealand Portrait Gallery will acquire the winning work.

The full list of finalists can be found at the New Zealand Portrait Gallery or online at http://www.nzportraitgallery.org.nz/portraits-online/adam-portraiture-award