This is What It Sounds like… When Dwarves Cry 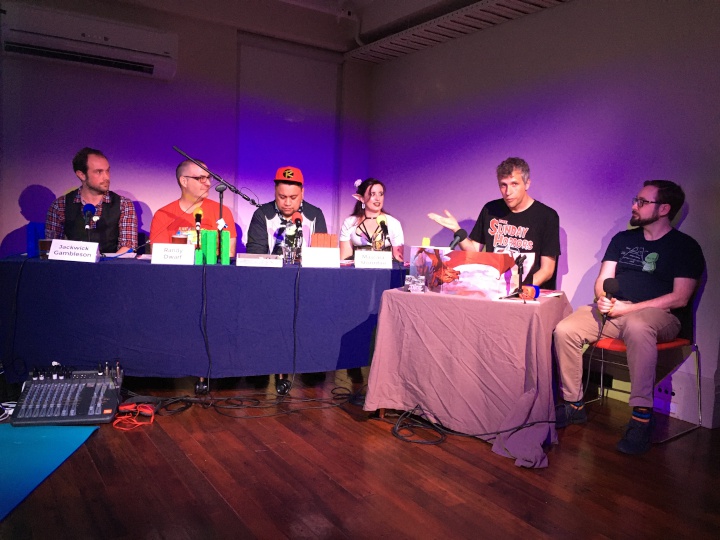 Dwarves aren’t known for crying. They prefer quaffing ale, bashing goblins, and saying “and my axe!” But now their beards are wet with tears, and the purple-clad Prince calls for heroes!

Unfortunately, he gets Randy’s bunch.

In Fringe 2020 show D&D Live: When Dwarves Cry, comedians and improvisers set out on a Dungeons & Dragons quest to set things right! Or at the very least, to not make things significantly worse.

On this adventure are STEVEN YOUNGBLOOD as well-meaning agent of chaos Randy Dwarf, JARROD BAKER as cynical priest Frun Grothilde, and THOM ADAMS as bigger-on-the-inside warlock Jackwick Gambleson. They don’t know what’s coming and will improvise their way through the adventure, hoping their dice don’t roll too badly.

Dungeon Master MORGAN DAVIE will need all his years of experience to herd these unpredictable performers on their journey.

No knowledge of iconic fantasy game Dungeons & Dragons is needed to have a great time watching these unorthodox heroes ricochet through an adventure. This show is for everyone.

D&D Live: When Dwarves Cry is part of Fringe 2020. One show only, Friday 6 March at 10pm. Tickets can be purchased on the BATS website, bats.co.nz.

Diceratops brings amazing games to the Wellington stage. They’ve been selling out D&D Live shows at BATS Theatre since 2018. Their podcast ’Diceratops Presents’ is available on every podcast platform now.

Morgan is an award-winning game designer, and part of the team behind the Game of Awesome, beloved of school kids throughout the country. He played D&D back when it was briefly cool, kept at it for decades while it wasn’t cool, and is still going now it’s cool again.

Steven is an improviser and muddling public servant who makes all life decisions on the roll of a dice. A regular cast member of improv group Double Fancy, Steven has featured in improvised noirs, improvised soap operas, and non-improvised musicals.

Jarrod is a comedian, voice actor and jack-of-all-trades who, as part of musical duo Mrs Peacock, won the 2007 Billy T James award. When not parenting or cat-parenting he can mostly be found cooking increasingly elaborate meals and posting them to Instagram.

Thom is a comedian and science communicator, so he put most of his points into Charisma and Intelligence, and very little into Wisdom, Dexterity, Strength & Constitution. He's best known as writer and actor for Wellington’s political satire institution Public Service Announcements.