On Friday, May 14, some of Aotearoa’s film industry independent visionaries descended on Auckland’s Academy Cinemas for New Zealand's Vision Feast Film Festival 2021 Awards. Winners from across the globe, from New Zealand, Japan, Norway and more, were announced across the 17 award categories, and took home some great prizes. Aotearoa’s favourite rockers, SIX60, had a great night at the awards, with their music video for Sundown taking out three top prizes, including awards Best Music Video, Visionary Directing and Visionary Editing. 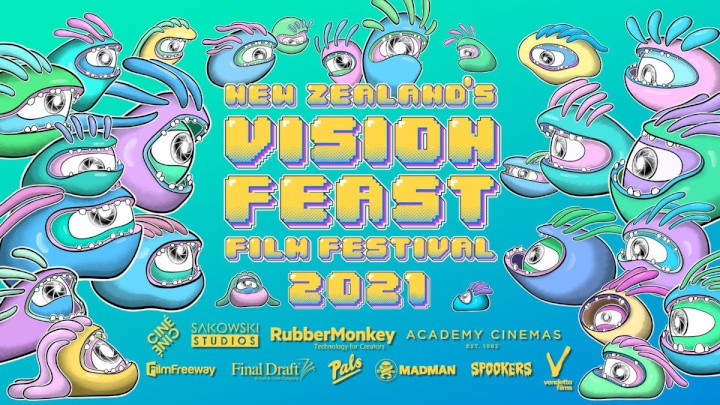 Now in its sixth year, The Vision Feast recognises filmmakers who have poured blood, sweat and tears into their projects; filmmakers showing visionary madness in their creative storytelling. In addition to the awards’ prestige, winners were up for some incredible prizes, including two copies of Final Draft Screenwriting Software, and a $3000 rental voucher from Rubber Monkey for Best Aotearoa Project. The award for Best Aotearoa Project went to Auckland filmmaker Isaac Bell for his short film Space Invader, which also won the Audience Choice Award by a landslide.

2021’s nominees and winners represent some of the best mind-melting local and international talent, with entries spanning shorts, animated projects, documentaries, music videos and more. The winners of the night showed a flair for creative storytelling fused with technical skills and a delightful stroke of madness. For 2021, The Vision Feast chose Horror and Documentary as their special spotlight categories, with the country spotlight focusing on France.

The Awards ceremony was a chance to celebrate the creative ingenuity and visionary projects of the 2021 programme, which includes over 30 films, spanning genres, styles and creative storytelling techniques. The evening was hosted by the fabulous Jen Van Epps (Together Forever Tea, The Sounds, Emilia) and included our New Zealand filmmakers presenting their works, in addition to the announcement of award winners.

“The audience was served a degustation of works from some seriously talented independent filmmakers. Being able to bring this community together and celebrate their hard work on the big screen is what the Vision Feast is all about. From local talent and the best from around the world, we aim to blow your minds and provide a visual feast for your eyes!”
- Aleksander Sakowski, Festival Director

Entries for the 2022 season are already open, with the new category spotlight being Short Screenplays. The country spotlight is focused on Australia, and Genre Spotlight on Scifi.

Following on from the 2021 Awards screening, a selection of New Zealand's Vision Feast Film Festival 2021 programme are available to experience online via Vision Feast’s website, including

For more information on the festival and submissions for 2022 visit thevisionfeast.com