A recently discovered poem by Māori writer J.C. Sturm explains why colonisation wasn’t good for Māori. It was written seventy years ago. 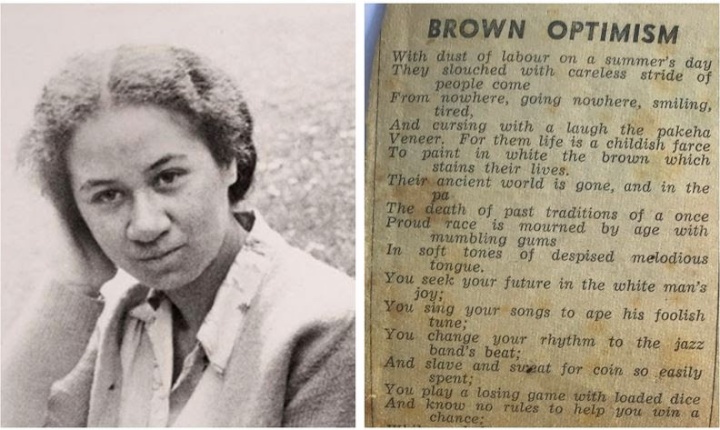 Professor Millar believes it’s possible that JC Sturm was a 20-year-old student at Canterbury University College (as the University of Canterbury was then known) when she wrote ‘Brown Optimism.

University of Canterbury Professor Paul Millar, is the literary executor for the Māori writer J.C. Sturm (Te Whakatōhea, Taranaki, Te Pakakohi, Ngāti Ruanui), who was born Te Kare Papuni in 1927, and named Jacqueline Cecilia Sturm (Jacquie) when she was adopted by a Pākehā family at the age of four. Professor Millar is currently preparing an edition of J.C. Sturm’s Collected Works for publication.

A few weeks ago, while sorting through a large amount of unpublished and unattributed writing by her, he came across the poem ‘Brown Optimism’, which The Spinoff is re-publishing after 70 years, along with an article by Professor Millar introducing the poem and explaining its significance.

“The poem was published decades ago, but only recently attributed to Sturm,” says Professor Millar. “We were intending to publish it in the Collected, but when I heard National MP Paul Goldsmith say he thought that on balance colonisation had been good for Māori, the poem leapt into my mind.

“I think it says something about our progress as a nation that a poem a young Māori woman wrote seven decades ago protesting colonisation still reads as an immediate response to a politician in 2021.”

The Spinoff agreed that the poem offered an important perspective on a topical issue, and also that a newly-discovered early poem by J.C. Sturm was significant in its own right and worth publishing as a stand-alone piece.

Professor Millar believes it’s possible that Sturm was a 20-year-old student at Canterbury University College (as the University of Canterbury was then known) when she wrote ‘Brown Optimism’.

“We only have a clipping from a periodical but on current evidence, I think the poem was first published in a student magazine in the late 1940s, though I haven’t yet discovered where. It might even have been composed around 1948 when she was a student at Canterbury, studying anthropology. This was an important time for her, and events around this period sparked her activism,” he says.

“As one of a tiny number of isolated Māori students in the New Zealand university system, she was questioning for the first time the heavy expectations on her to succeed in the Pākehā world. In a later poem she described the experience of being the only Māori among Pākehā through the first decades of her life, as always ‘being out of step, place, tune, joint’ (‘In Loco Parentis’).

“‘Brown Optimism’s anger, overt politics, and prescription for better relations between Māori and Pākehā, shows that, even back then, Jacquie understood how and why colonisation hadn’t been good for Māori, and what was required to begin repairing the damage.”