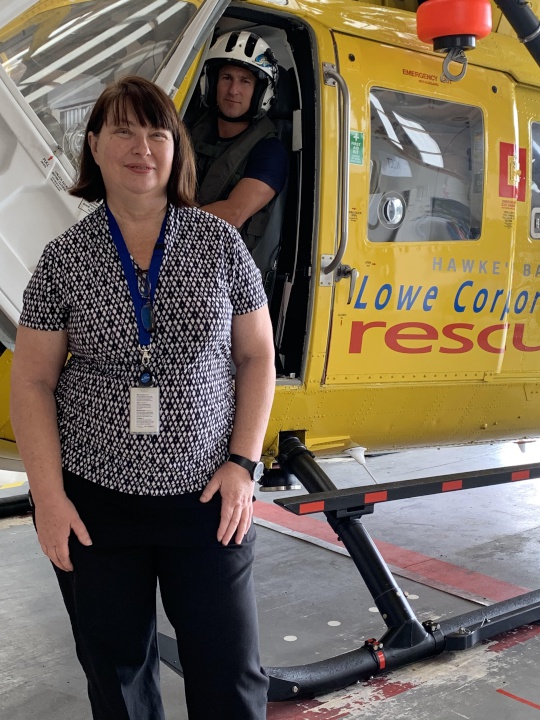 Jackie Hardy’s nursing career has taken her to the centre of conflicts, terrorist attacks and deadly tsunamis.

Now she’s bringing her years’ of experience to one of the biggest flight teams in New Zealand as the new Clinical Nurse Manager of Flight and Transport at Hawke’s Bay District Health Board (HBDHB).

Ms Hardy’s role involves co-ordinating staff in what is a very busy team. The HBDHB flight team transferred more than 1500 patients in the 12 months to September 2019 – equating to about 138 patients per month. She’ll make sure her team are up-to-date with their training and share some of the knowledge she’s picked up during her varied career.

Ms Hardy trained as a registered nurse at the Royal Brisbane Hospital, did her psychiatric nursing at Baillie Henderson and midwifery at the Gold Coast Hospital, before joining the Royal Australian Air Force - where she got the feel for flight nursing. She was deployed to conflicts in Rwanda and East Timor as well as to the aftermath of the Bali bombing and the Boxing Day tsunami in Sumatra. In Rwanda, she was part of a team providing medical support to the United Nations after the genocide and during the Kibeho massacre.

“We weren’t allowed anywhere without two male armed escorts even though we were carrying weapons ourselves. We were there to support the UN but we ended up treating a lot of the local children. You had to think laterally, for example, we were equipped to deal with adults so a small suction catheter for an adult could be used as naso gastric tube for a baby.”

The situations in East Timor, Bali and Sumatra were just as challenging. Ms Hardy recalls the strange sight of seeing a Sumatra local clearing devastation from the tsunami atop an elephant, all while talking on a cell phone. It was a sense of purpose that kept her going in such dire situations.

“You accept that you’re not going to make a huge difference but you might make a difference to one or two lives that might not have been saved. That’s what it’s all about.”

Ms Hardy also ran the air force aeromedical training school for three years in both fixed and rotary aircraft, before joining the Royal Flying Doctors Service, based in Bundaberg, north of Brisbane.

“It was a busy little base, not dissimilar to here,” she says. “Working as a sole operator, you’re up in the air with a pilot so if anything goes wrong you’ve got to rely on your own skills to deal with the situation.”

It’s this experience that Ms Hardy’s Hawke’s Bay team of about 20 fight nurses will be able to draw on.

“I know what they’re experiencing and I know the idiosyncrasies of flight. I’ve had some interesting flights including watching a pilot duck under the cockpit during a bat strike on final descent.”

It’s a job where you never know what to expect so you have to be prepared for anything.

“It helps to be resilient and believe in Murphy’s Law,” she says.

Despite her adventurous past experience, Ms Hardy insists there’s plenty to keep her busy in Hawke’s Bay.