Our Own Worst Enemy: 90 Percent Of All New Zealand Deaths Link Back To Modifiable Behaviours

A new report from AIA NZ has uncovered the five risk factors that lead to the five most common preventable non-communicable diseases which account for more than 90 percent of New Zealand’s deaths.

The findings, rooted in research originally founded by the United Nations, demonstrate how many of the world’s deaths are caused by lifestyle factors that contribute to preventable but deadly diseases. 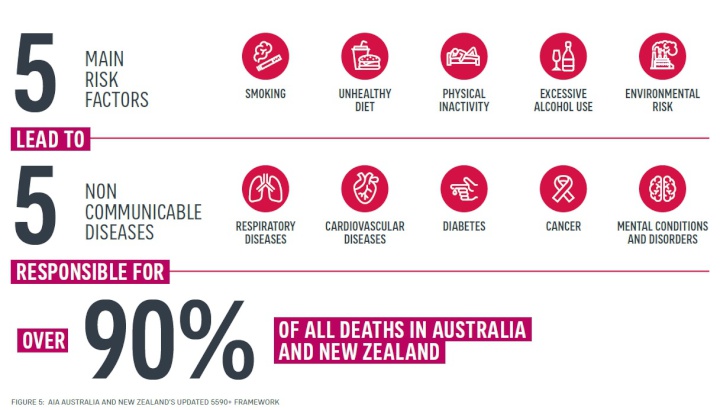 The widespread impact of non-communicable diseases

Nick Stanhope, AIA NZ Chief Executive, says the case for focusing on health promotion and preventing non-communicable diseases is stronger than ever.

“Covid-19 has been on our minds for the past year, with more than a third of Kiwis thinking Covid-19 was responsible for the most deaths globally in 2020. However, the more insidious threat is non-communicable disease.

“At AIA NZ, we believe it’s our social responsibility to move away from simply being a payer of claims, to partner with Kiwis to live Healthier, Longer, Better lives.”

Of those who have suffered from a non-communicable disease, a quarter say they could have prevented it with better understanding of the pre-cursory risk factors and how to prevent them.

“That’s more than 465,000 Kiwis who, by making small lifestyle changes to reduce their risk of disease, could have saved themselves suffering from a non-communicable disease,” Stanhope continues.

“Additionally, nearly four million New Zealanders have felt the impact of non-communicable diseases on their close friends and family. It’s imperative we focus on a preventative healthcare mindset to significantly reduce this burden on our families, friends and communities.”

“Mental wellbeing is becoming an increasingly important pillar for Kiwis both individually and as an integral part of business operations. Naturally, it was important for us to incorporate poor mental health into 5590 as a non-communicable disease.”

AIA’s 5590 report shows that mental health effects, and is affected by, other non-communicable diseases.

Many studies also show there is a correlation between depression and an unhealthy diet and smoking - both of which are key risk factors in the 5590 framework.

The environment and public health

The environment encompasses everything external to people, including physical, natural, social and behavioural environments. 5590 recognises how our interactions with the environment can impact our health.

“The environment is being increasingly recognised as a cause of disease, with research showing links between non-communicable diseases and environmental factors such as air pollution, climate change, agriculture, and urbanisation,” Stanhope notes.

The goal of 5590 is to keep people healthy and reduce the chance of Kiwis developing preventable non-communicable diseases.

“AIA NZ wants to increase peoples’ control over their own health by engaging and empowering individuals and communities to choose healthy behaviours and make changes that reduce the risk of developing non-communicable diseases,” Stanhope continues.

“Central to AIA NZ’s preventative healthcare focus is AIA Vitality, our market-leading health and wellbeing programme. Through AIA Vitality members are empowered and incentivised to make small lifestyle changes with the aim of decreasing their risk of developing a non-communicable disease.

“If we can get Kiwis to build healthy habits over time or live in less risky conditions, then we can reduce the incidence of health problems associated with these risk factors. In turn, we will create a healthier country and a health system built on prevention as opposed to treatment.”