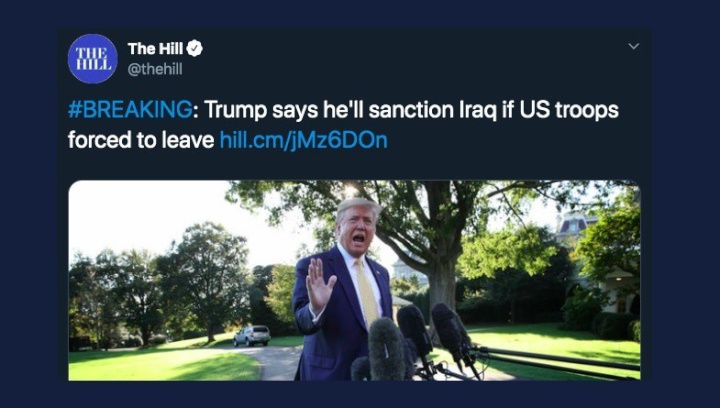 Following a vote by the Iraqi parliament to remove foreign troops from the nation, the US president threatened to destroy Iraq’s economy in retaliation and to refuse to leave unless an expensive military base worth billions of dollars was paid for.

“If they do ask us to leave, if we don’t do it in a very friendly basis,” Trump told the press on Sunday. “We will charge them sanctions like they’ve never seen before ever. It’ll make Iranian sanctions look somewhat tame. If there’s any hostility, that they do anything we think is inappropriate, we are going to put sanctions on Iraq, very big sanctions on Iraq.”

“We have a very extraordinarily expensive air base that’s there. It cost billions of dollars to build. Long before my time,” Trump also said. “We’re not leaving unless they pay us back for it.”

And this would be the same US empire that used the narrative of bringing democracy to Iraq in order to help manufacture public support for “Operation Iraqi Freedom” (which Bush’s Press Secretary Ari Fleischer kept hilariously calling “Operation Iraqi Liberation” [OIL] by mistake). The same US empire that has used the “liberation” of Iraq from the tyranny of Saddam Hussein and the institution of democracy in the Middle East to justify its evil and unforgivable invasion ever since.

Yet the instant Iraqi democratic institutions become even slightly inconvenient for the US empire, Iraqi democracy gets flushed down the toilet. Iraq’s elected parliament voted very clearly for the removal of America’s military presence in the interests of its own sovereignty, and Trump has stated, in his typical accidentally-honest way, that America will not honor that vote. The US is allowing Iraq the same kind of democracy that Americans have: democracy so long as it doesn’t inconvenience the powerful.

This is, of course, because the invasion of Iraq had nothing whatsoever to do with democracy. The invasion of Iraq was about controlling a crucial geostrategic region which refused to bow to the dictates of the US-centralized empire. This is important to remember, because that is also exactly what the regime change agendas against Iran and Syria are about.

It is not a mysterious coincidence that all these horrible dictatorships that urgently need a forceful injection of freedom and democracy just so happen to reside right next to each other. The fight for control over the Middle East has always been about controlling important fossil fuel resources and trade routes, and thereby controlling the world. If the empire can’t gain control of the nations in the region via absorption into the imperial blob (Saudi Arabia, UAE, Turkey, etc) or just constructing a satellite from scratch on top of a previously existing nation (Israel), then the empire will work to gain control by attempting to replace any noncompliant governments with compliant ones (Iraq, Syria, Iran).

As things heat up with Iran you will begin hearing more and more babbling gibberish about the poor, poor Iranians and how unfortunate they are to live in a nation where the women can’t feel their hair in the wind and LGBT people need to hide who they are. But as a leaked State Department memo revealed in 2017, the empire is never actually concerned with human rights, and it is never actually concerned with democracy. The sole concern of the empire is power, and the growth of that power. That’s all this has ever been about.

Iraq seems to be destined to be the nation that keeps teaching us important lessons, so the very least we can do in response is make sure that we learn those lessons, and remember them.

Thanks for reading! The best way to get around the internet censors and make sure you see the stuff I publish is to subscribe to the mailing list for my website, which will get you an email notification for everything I publish. My work is entirely reader-supported, so if you enjoyed this piece please consider sharing it around, liking me on Facebook, following my antics on Twitter, checking out my podcast on either Youtube, soundcloud, Apple podcasts or Spotify, following me on Steemit, throwing some money into my hat on Patreon or Paypal, purchasing some of my sweet merchandise, buying my new book Rogue Nation: Psychonautical Adventures With Caitlin Johnstone, or my previous book Woke: A Field Guide for Utopia Preppers. For more info on who I am, where I stand, and what I’m trying to do with this platform, click here. Everyone, racist platforms excluded, has my permission to republish or use any part of this work (or anything else I’ve written) in any way they like free of charge.