World Leaders Call on US To Resume Diplomacy With Iran 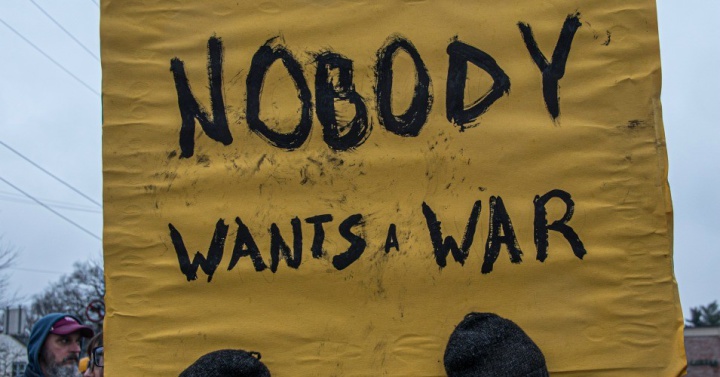 A protester holds a placard that says Nobody Wants a War during the demonstration. (Photo: Whitney Saleski/Echoes Wire/Barcroft Media via Getty Images)

"Unless real diplomacy begins, the risk for confrontation will not dissipate for real."

Following Iran's military strike on a U.S. air base Tuesday night, world leaders called on President Donald Trump to show restraint and follow the lead of Iranian Foreign Minister Javad Zarif, who said his country does not "seek escalation of war."

Iran targeted the al-Asad airbase in eastern Iraq four days and another near Erbil after Trump ordered the assassination of Iranian military commander Qasem Soleimani, provoking international outrage and fears of war with Iran.

The office of U.N. Secretary-General António Guterres said Wednesday that his message to Trump and Iranian leaders was simple.

"Stop escalation. Exercise maximum restraint. Re-start dialogue. Renew international cooperation," said Guterres. "It is our common duty to make every effort to avoid a war in the Gulf that the world cannot afford. We must not forget the terrible human suffering caused by war. As always, ordinary people pay the highest price."

Following Tuesday's air strikes, Iran's Zarif reiterated that while his country does not want to escalate tensions further, Iranians "will defend ourselves against any aggression"—leaving it up to Trump whether further violence will ensue.

In Sweden, Finnish and Swedish leaders held a joint press conference to call for "dialogue [and] de-escalation."

European Union leaders said they were prepared to do "everything possible to rekindle talks."

"The use of weapons must stop now to give space for dialogue," European Commission President Ursula van der Leyden said in a statement.

"It is in no one's interests to turn up the spiral of violence even further," added Josep Borrell, the EU's head of external affairs.

British Labour lawmaker Lisa Nandy called on all world leaders to "stand up to Trump," offering a contrast to Prime Minister Boris Johnson's statement in support of the United States' "right to protect its bases and personnel."

This is a very dangerous moment. 17 years after the catastrophic decision to go to war in Iraq violence still rages every day. World leaders must stand up to Trump. The last thing we need is another all out war. https://t.co/dB04Zpx3Qf

Zarif called on the U.S. government to "come to its senses" and said the United States' European allies must pressure high-level U.S. officials to do all they can to urge de-escalation by Trump.

"Europe can play a useful role by informing the United States of the serious error in their analysis—that they should stop listening to clowns," said Zarif. "That they should base their policy based on reality and not some illusions of some clowns who have ambitions elsewhere."

In an address to Americans on Wednesday morning, Trump signaled that the U.S. may not launch more strikes for the time being, saying, "Iran appears to be standing down, which is a good thing for all parties concerned and a very good thing for the world."

But the president also began his speech with a threat, saying the country "will never be allowed to have a nuclear weapon."

Although Trump did not signal that the U.S. would retaliate against Iran for Tuesday's air strike, Trita Parsi of the Quincy Institute for Responsible Statecraft said, the U.S. president has yet to show commitment to the kind of diplomacy world leaders are demanding.

"Unless real diplomacy begins, the risk for confrontation will not dissipate for real," Parsi tweeted.

This story was first published on Common Dreams here and is licensed under a Creative Commons Attribution-Share Alike 3.0 License.