Breaking Boundaries For Over Sixty Years

Whangārei Hospital laboratory scientist Shirley Gates credits being useful, having science in her blood and ongoing learning, as reasons for keeping her working well into her eighties. 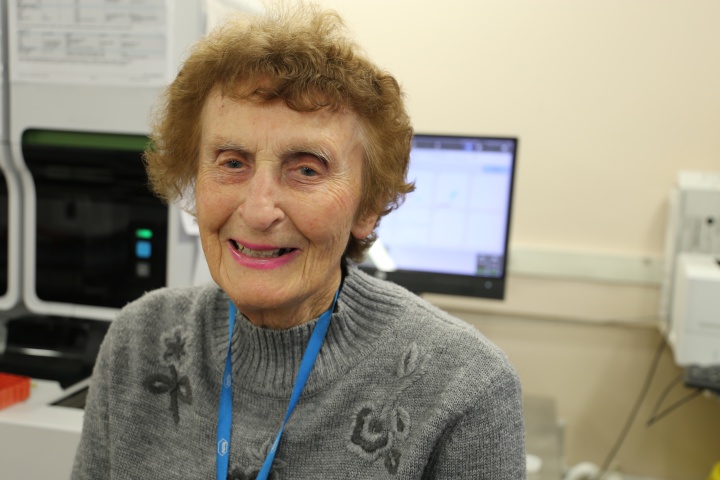 Bucking trends is something Shirley has done since she began her career in the 1960s, when women traditionally took one of two career paths – teaching or nursing. At 17, Shirley followed her mother into nursing by starting work as a nurse's aide at Dargaville Hospital. She quickly grew bored of the strict rules and monotonous tasks, so when an opportunity to work as a trainee in the hospital's new laboratory came up, she applied, got the job and found her forte - science.

After the laboratory closed down, she moved to Whangārei Hospital to complete her five years of training, then was appointed charge technologist of biochemistry. She stayed in this role until she took time off to have her two children. Then, four years later, she said Dr Orpin knocked at her door, asking if she would join him in his new Radioassay Laboratory. She couldn't refuse the opportunity and re-entered the workforce part-time and eventually integrated into the main laboratory, where she has remained until now.

Shirley said there weren't many women working or staff in laboratories back then, and the workload was significantly different.

"We did everything manually. For example, we made our own chemical reagents, white cell counts were done manually, and in emergencies, we even bled our own blood donors – but we had the time because we weren't as busy as we are now."

She explained that the beauty of doing everything manually meant they could physically see results before reading them in the biochemistry colorimeter. So, for example, they could tell if people had diabetes just by looking at the intensity of the resulting colours.

"My work changed enormously over the years. These days, it's about turnabout times and quality control. It's moved to a more highly pressurised environment and is about getting things correct and keeping up with the innovation - which I have never been scared of."

Her role has grown from doing bench work to management. She has also worked as a quality facilitator, health and safety representative, trainer, and continued professional development (CPD) coordinator, which she said is a vital part of the laboratory due to the changing environment and continued updating technology.

Shirley currently works in haematology and says although she gets to do some bench work, she spends a lot of her time sharing her in-depth skills and knowledge with her colleagues through training, educating and coordinating seminars.

In 2013, Shirley completed her masters thesis, 'The Palynology of two Whangarei Craters', which focused on another of her passions, rock and gemstones.

Her love of teaching and learning extends to the Whangarei Rock and Gemstone club, where she is Club secretary and writes their regular 'Stone Age News'.

Despite officially retiring this week, Shirley has no plans to hang up her lab coat just yet. To keep her finger on the pulse and her brain active, she will continue to participate in seminars.