US demand for television fell double digits during protests

Total demand for all television series in the United States dropped 17.8% from May 15 to June 4, with the declines beginning immediately after George Floyd’s death, and accelerating between May 31 and June 4, according to global demand data leaders Parrot Analytics.

As protests spread beyond the United States, demand for television series in the rest of the world was down 7.8% over the same time period. 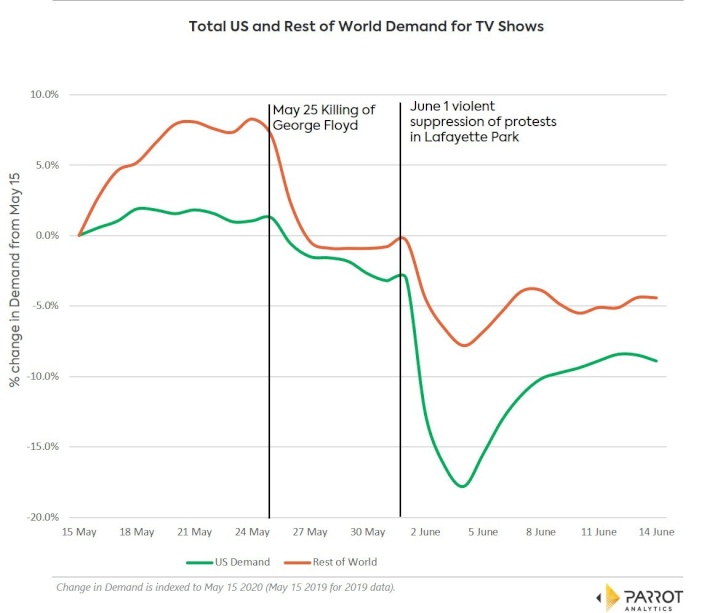 “In the days following George Floyd’s killing, as protests against systemic racism and police brutality spread across the US, audiences’ attention was drawn away from their usual content consumption,” said Karina Dixon, Parrot Analytics Global Insights Director. “Normally market level and global demand is relatively stable. A 17.8% drop in total US demand over a three-week period shows just how much this tragedy has captured the American public’s attention.”

Parrot Analytics measured a similarly precipitous drop in total US demand in the days following the first confirmed case of COVID-19 in the US as coverage of the pandemic dominated the news and transfixed audiences.

“While the protests began in the United States, they quickly spread around the globe,” added Alejandro Rojas, Parrot Analytics Director of Applied Analytics. “The international impact of these events can be seen in the total demand for TV shows in all countries outside the US where we measured a 7.8% dip. This drop in both the US and around the world is likely due to a combination of the protest movement drawing audiences’ attention away from normal TV content, combined with many states and nations re-opening after several months of coronavirus lockdowns.”

Parrot Analytics also found an inverse relationship between the total demand for TV content and search interest in 'Black Lives Matter,' as seen below. 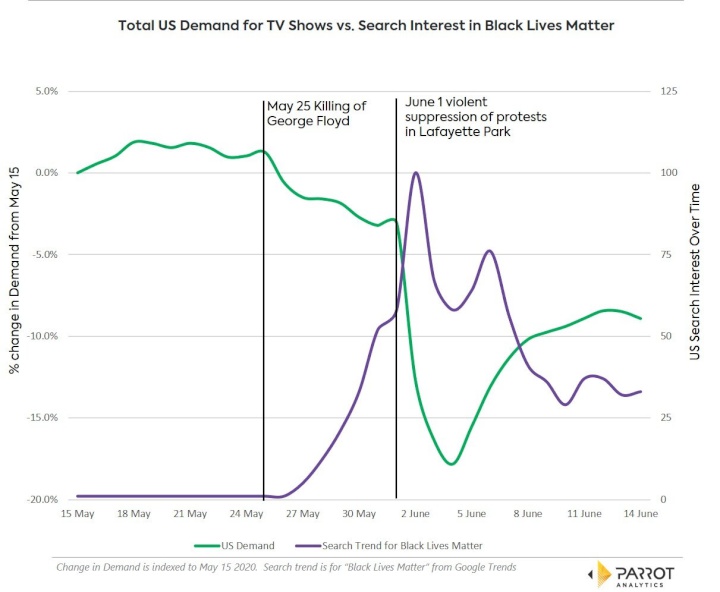 While overall demand for content is down, certain socially relevant shows are seeing a surge in audience demand during the protests.

As we previously reported, we found US demand for Netflix’s Dear White People grew 329%, while When They See Us was up 147% during the week of May 27-June 2, just as the nationwide protests were starting.

Parrot Analytics is the leading global content demand analytics company for the multi-platform TV business. With the world’s largest TV audience demand datasets, the company currently tracks more than 1.5B daily expressions of demand in over 100 languages from 200+ countries. With Parrot Analytics’ TV360 platform, everyone from individuals to global media powerhouses can better understand the global demand for content across all platforms, as well as drive better production, distribution, acquisition and marketing decisions, and increased subscriber growth and retention. The company has offices in Los Angeles, New York, London, Mexico City, São Paulo and Auckland. Connect with us on YouTube, LinkedIn and Twitter. For more information, see www.parrotanalytics.com.