Up To 400,000 Could Be Displaced By New Goma Eruption In DR Congo, Warns UNICEF

With fears that one of the world’s most active volcanoes could erupt again in the Democratic Republic of the Congo (DRC), the UN Children’s Fund (UNICEF) is warning that up to 400,000 – nearly 280,000 children – could be displaced and in need of protection or support, if the current exodus continues. 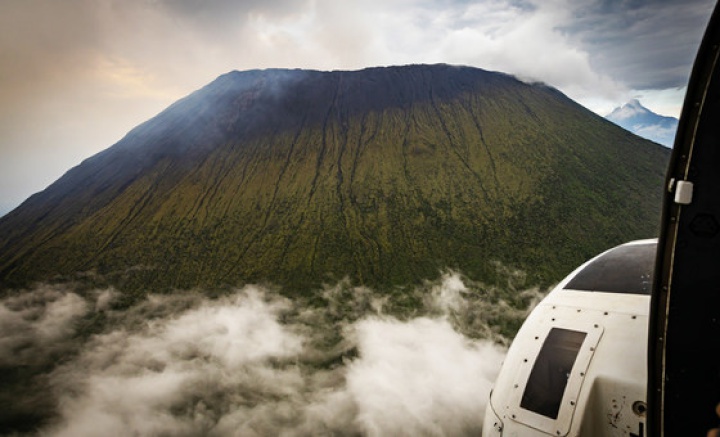 Hours after the eruption of the Nyiragongo volcano, near Goma, in eastern of the Democratic Republic of Congo, MONUSCO helicopters and drones were in the air conducting the first reconnaissance flights., by MONUSCO/Kevin Jordan

Mercifully slow-moving lava spewed from the huge crater of Mount Nyiragongo last Saturday, causing thousands to flee Goma, a city of around two million. At least 32 people died as a direct result of the eruption, including three children, while 40 people have been reported as missing, said UNICEF.

The sky turns red over the UN compound in Goma in the eastern Democratic Republic of the Congo following the eruption of the Mount Nyiragongo volcano., by MONUSCO/Tsok James Bot

The agency said in a statement it welcomes the DRC Government’s “dedicated efforts” to protect people living in the Red Zone of eastern Goma from risks associated with further eruptions, and is warning of the potential that children would be at greater risk from further mass evacuation.

"Whenever large groups of people are displaced in a short period of time, the dangers to children increase", warned UNICEF Representative in the DRC Edouard Beigbeder. "We must be alert to immediate risks for children on the move, including protection issues, nutrition and health risks, including waterborne disease and especially the spread of cholera.”

Thousands of those feeling Goma from the threat, are heading to the nearby town of Sake - 25 km northwest of the city - an area prone to cholera outbreaks where at least 19 suspected cases have been recorded in the last two weeks.

“With an increased danger of a cholera epidemic, we are appealing for urgent international assistance to avert what threatens to be a catastrophe for children," added Mr. Beigbeder.

Thousands of people fled Goma following the 22 May eruption, many of whom have headed to Sake.

An order by the authorities on Thursday that residents of the ten neighbourhoods in the east of Goma known as the Red Zone must immediately vacate their homes has seen a further mass exodus, said UNICEF. The Zone is thought to be the part of the city most at risk from more lava spewing forth.

Many of those fleeing on Thursday travelled on foot, carrying mattresses and cooking utensils, while others escaped by car or on motorbikes.

Nearly 1,000 children who were separated from their parents amid the chaos following Saturday’s eruption, have now been identified, with UNICEF helping to reunite nearly 700 children with their families.

An additional 142 children have been placed in transitional foster families, while 78 are in transit accommodation centers. “Tragically more than 170 families are still looking for lost children. UNICEF is now concerned that the chaos of the latest evacuations will result in more children being separated from their families”, said the press release.

In response to the crisis, UNICEF is arranging the delivery of essential non-food items – such as jerry cans and tarpaulins in addition to providing vitally important Water and Sanitation (WASH) equipment.

Steps have also been taken to establish a Volcano Information Centre (VIC), accessible through toll-free SMS system, which has played a crucial role in addressing misinformation surrounding the eruption and has so far been used by more than 5,200 people.

Needs Assessments have also been conducted in all UNICEF’s main programme areas – including WASH, Child Protection, Education, Healthcare, Community for Development and Nutrition – all vitally important aid contributions in the DRC that remain critically underfunded.

The agency said it was working closely with the Government of the DRC, especially in the areas of Health and Nutrition.