A landowner and her partner, on the Kapiti Coast, have been convicted, fined (and one imprisoned), for repeatedly damaging wetlands on their property and other environmental offending, despite being told to stop by the council. 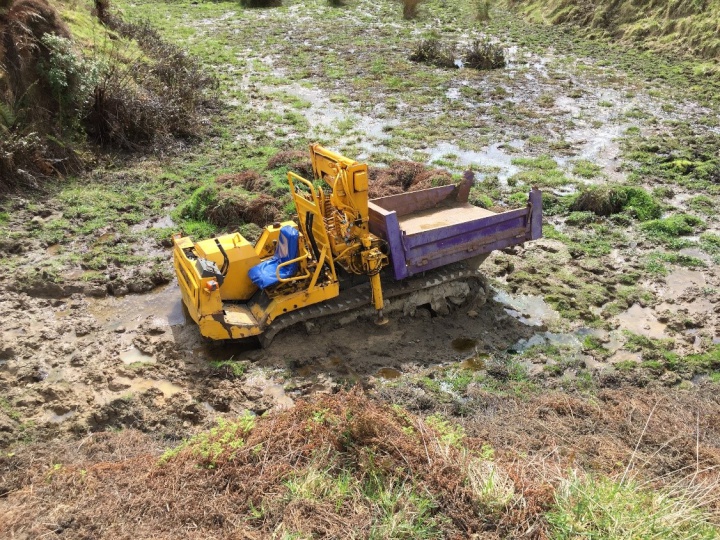 This is the conclusion to a Greater Wellington Regional Council prosecution of Julie Crosbie and Adrian Page for offending which spans December 2019 to March 2021. They pleaded not guilty to 35 charges each which included reclaiming areas of wetland, draining water from wetlands, allowing livestock to damage wetlands, breaching abatement notices and breaching an interim enforcement order relating to a sewage disposal system.

The case went to trial, where Mr Page defended himself and Ms Crosbie chose to let him represent her. Both defendants were found guilty by Judge Dwyer and today appeared in the Wellington District Court for sentencing.

Given the deliberate nature of offending; the blatant disregard of the advice from the council; the scale of damage; and a history of Resource Management Act (RMA) offending; Greater Wellington sought that Mr Page, who carried out the work, receive a custodial sentence. A fine of $125,000 was sought for Ms Crosbie, who owns the land and allowed the offending to occur. In addition, Greater Wellington sought a court order to ensure the damage to the wetlands was remedied.

The judge issued a fine of $118,750 to Ms Crosbie, which was the requested $125,000 reduced by 5 per cent for previous good behaviour. He sentenced Mr Page to 3 months imprisonment, an unusual step in environmental offending. The judge also issued an Enforcement Order, as requested by Greater Wellington, directing the defendants to cease the offending activities, protecting the wetlands, and instructing them to carry out work to remediate the damage.

In passing sentence the Judge commented that the protection of natural wetlands under the RMA is a matter of national importance; wetlands have significant ecological importance for their functions of improving water quality, reducing the impact of flooding and providing habitat for flora and fauna. He also commented on the deliberateness of the offending, in particular for Mr Page whose attitude he described as “aggressively defiant of the council and the court.”

In deciding on the level of fine the Judge listened to submissions from the lawyers representing Greater Wellington (Luke Cunningham Clere) on how serious the offending was and what the aggravating and mitigating factors were. Of particular note was the repeated nature of the offending by both defendants despite being reminded time after time, verbally and in writing, of their legal obligations.

GWRC’s conclusions on effects on the wetlands and waterbodies were entirely adopted by the court. Despite the verdict of guilty from trial and the comments of Judge Dwyer at sentencing, Mr Page argued, in his submissions, that the court and council were wrong in their approach.

The Judge was very clear that all charges were proven and that the deliberate actions to ignore both abatement notices and an enforcement order from the court were serious offences and highly aggravating factors. In mitigation he accepted that in this instance the area of wetland damaged was limited and there was an opportunity for restoration through the granting of enforcement orders. On conclusion of sentencing Mr Page indicated he would appeal the case and was taken into custody by the court.

“We will always try to work with landowners to help identify wetlands and advise them on the rules and regulations they need to comply with”, said council Environmental Protection Team Leader, James Snowdon.

“The Resource Management Act is very clear that the preservation and protection of Wetlands is a matter of national importance. Where people choose to ignore our advice and damage significant and vulnerable habitats we are left with no choice but to pursue enforcement action. In this case Greater Wellington officers carried out a detailed investigation, assisted by a rightly concerned community; this has led to these convictions and sentence.

“In the broader compliance space, this is the second successful prosecution case the council has concluded in the last month. Where serious non-compliance occurs we will investigate and will not hesitate to prosecute where circumstances warrant.”

Greater Wellington takes its regulatory role under the Resource Management Act seriously and will take action as appropriate when breaches are found. Wetlands are a particularly vulnerable habitat that are protected by a raft of regulations. Wetlands of every shape and size are beneficial to our environment, land and communities.

Help about wetlands can be found by calling the council on 0800 496 734, where reports of harm to the environment can also be made.