Tourism Should Prepare For More Than 1.22 Million Domestic Holidaymakers

Horizon finds that 34% of adults, an estimated 1,229,600 million people, intend to take a domestic holiday in the next 7 to 12 months, as alert levels allow.

This is up 176,000 from Horizon’s April 7-12 measure of activity people were likely to undertake in the first 6 months after Level 4 was lifted and when permitted.

Horizon says the actual number taking domestic holidays now restrictions are eased will be larger. 17% expect to travel alone while 59% say they will travel with their partner or spouse.

The nationwide April 28-30 Horizon survey of 1,131 adults also reports not only those who would go on a domestic holiday, but who would like to if they could in the next 12 months.

Horizon says the areas which most New Zealanders would like to holiday in during the next 12 months are the Bay of Islands (an estimated 823,300 adults). The number who will definitely holiday there in the next 7 to 12 months is estimated at 378,700.

Those who indicated that they would definitely take a domestic holiday in the 7 to 12 months after lockdown restrictions were lifted each expected to spend an average of $2,320 on their trips.

Asked what sort of “mood” their domestic holiday would be if they were able to take it. Of those who said they would take a domestic holiday in the 7 to 12 months after lockdown restrictions were lifted:

Horizon’s Principal, Graeme Colman, says definite and likely visitor numbers are also large for some of the main centres, and total potential is higher for some smaller regions than the actual numbers of domestic visitors they were experiencing before COVID-19.

“We’re hopeful they can use the insights to make the most of the restart – and in each of the coming 12 months. It should help them target potential travellers who most want the holidays they are offering.”

The research also profiles the 64% of adults who will not take a domestic holiday in the next 7 to 12 months, and what they would prefer if they did and at what cost. This would inform campaigns to increase the number of definite holidaymakers to more than 34% overall. 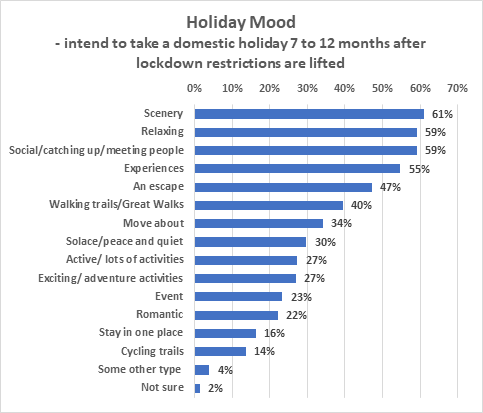 There is a subset of data for those who would use the Great Walks.

All of these are reported by up to 11 demographic criteria which Horizon hopes will help tourism promotion agencies and operators nationwide optimise the restart of domestic tourism.

1,131 members of the HorizonPoll national panels, representing the New Zealand population 18 years of age or over, responded to the survey between 28 and 30 April 2020.

The sample is weighted on age, gender, highest education, personal income, employment status and region to fully reflect the New Zealand population at the 2018 Census and has a maximum margin of error at a 95% confidence level of ±2.9% overall.