These Boomers Are A-OK 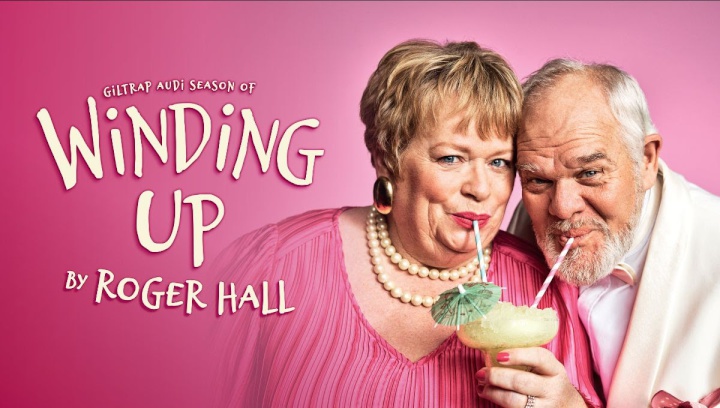 
A brand new work by New Zealand’s most successful playwright and the “Godfather of New Zealand Theatre” Sir Roger Hall will open Auckland Theatre Company’s (ATC) 2020 season in February ahead of a North Island tour to Hawke's Bay, Hamilton, New Plymouth and Tauranga in March.

The world premiere of the Giltrap Audi season of Winding Up will open at ASB Waterfront Theatre on 11 February. Winding Up will then christen the newly reopened Toitoi Hawke's Bay Arts and Events Centre in Hastings on 11 March, before seasons at Clarence St Theatre in Hamilton, New Plymouth’s TSB Showplace and Baycourt Arts Centre in Tauranga.

The new comedy revisits not only Roger Hall’s signature brilliance in comedy playwriting, but also two beloved characters who were at the heart of his smash-hit play, Conjugal Rites, which went on to become a popular British TV series in the 1990s.

Now in their seventies, Barry and Gen are coping with failing health, death of friends, estranged family, the need to downsize and (God help everyone) planning their funerals.
These fiercely-OK Boomers will be played by two of the country’s most celebrated comic actors, Mark Hadlow ONZM (Shortland Street - The Musical, MAMiL, The Hobbit trilogy) and Alison Quigan QSM (A Shortcut to Happiness, Calendar Girls, Shortland Street) who memorably performed together in ATC’s production of Hall’s Last Legs in 2017.

Director Colin McColl says, “Alison and Mark are great friends and have known each other since their drama school days. They are each superb actors on their own, but put them together and it’s comic dynamite. They have years of experience with Roger Hall’s work and an innate understanding of how his characters are comical but honest. I’m looking forward to working with them on this great new Hall script – and to sharing the fun as we tour the North Island.”

Award-winning actor Mark Hadlow is one of New Zealand’s most prominent performers. Lauded widely for his physical comedy, Hadlow’s critically acclaimed one-man show MAMiL has played to sell-out theatres throughout New Zealand. He has performed in over 150 plays, from musical theatre to Shakespeare, and appeared in dozens of films and TV series, including Mortal Engines, The Hobbit trilogy, Meet the Feebles and King Kong. Hadlow was appointed an Officer of the New Zealand Order of Merit for services to the arts in 2017.

Alison Quigan’s theatrical experience also spans more than 40 years. In that time she has acted in and directed over 100 plays, including 15 Roger Halls, and written 13 original works. She is perhaps best known for her work on Shortland Street, playing Yvonne Jeffries from 2004 to 2010, however other acclaimed roles include Cathy in Mum’s Choir and Mattie Fae in August: Osage County. Since 2013, Quigan has been the Performing Arts Manager of the Mangere Arts Centre - Ngā Tohu o Uenuku where she works to support new work with emerging practitioners in South Auckland. She was awarded a Queen’s Service Medal for Services to Theatre in 2001.

Auckland Theatre Company Artistic Director and Director of The Giltrap Audi season of Winding Up Colin McColl is joined on the production by an esteemed creative team. Set Design will be by award-winning designer John Parker (Still Life With Chickens, Six Degrees of Separation, Shortland Street - The Musical), Costume Design by Debbie Thearle (Last Legs, The Tempest, Waiting for Godot) and Lighting Design by Sean Lynch (Six Degrees of Separation, The Audience, Joan/The Daylight Atheist).