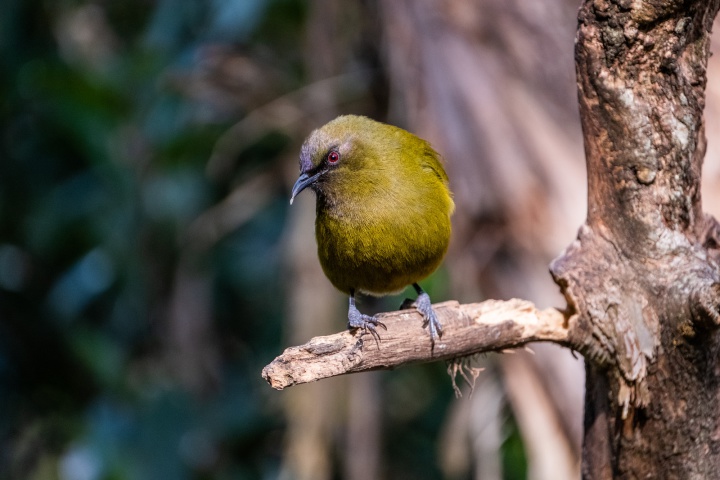 The More Birds in the Bush project is led by Manaaki Whenua Landcare Research, and includes staff from the Department of Conservation (DOC).

Waikato’s Mt Pirongia is a key site for More Birds in the Bush, which aims to achieve large-scale forecasting of predator populations based on available forest food sources.

“The goal is to lead to an optimisation of future large-scale forest management to include areas where native bird populations will have the greatest comeback,” she says.

North Island forests have warmer annual average temperatures and a more diverse range of tree species than South Island forests – resulting in more food both for rats and birds. If rats are not suppressed in these forests, they compete with birds, bats, lizards and insects for the same food sources, and of course prey on those animals as well.

Mt Pirongia was chosen as a research location as it’s a habitat for bellbirds/korimako, tomtits/miromiro, and rifleman/titipounamu – bird species preyed on by ship rats. The three bird species also differ in their diets, nesting habits, and body size which allows researchers to evaluate differences in nesting success and survival across species.

“We also wanted to work in a diverse podocarp-broadleaved forest where all three bird species still exist, and somewhere where some regular predator control was already in place, so we could compare bird population outcomes at the same site with and without predator control.
“Pirongia is a really great place to work at and it is a privilege to spend more time in the forest there,” she says.

Some native birds on Mt Pirongia wearing coloured bands. Anne says: “We have started banding titipounamu, miromiro, and korimako so we can follow these individuals to measure survival and their nesting success.”

Cara Hansen, DOC’s Waikato Biodiversity Ranger, says the More Birds in the Bush project is vital research for ongoing ecosystem restoration in forests in the warmer northern part of the country, where predator control has been underway for several years.

“We need to understand how to limit rats and increase birds, bats, lizards, giant insects and frogs,” she says. “This is a step up for us in that we are good at protecting the forest, and this research will help us understand how to protect the rest.”

The Department must also balance competing interest from research and the community. While this research is going on, organisations responsible for other sites are seeking to restore lost bird species by taking a small number of birds from Pirongia – including rifleman, potentially set to be translocated within the Waikato region. This is a reflection of the success of predator control on Pirongia, particularly by the Pirongia Restoration Society. It is also an indication there are very few places where these birds now exist because of the presence of predators and the difficulty faced in controlling them.

More Birds in the Bush is funded through the Ministry of Business, Innovation and Employment’s Endeavour Fund, which supports transformational science research.