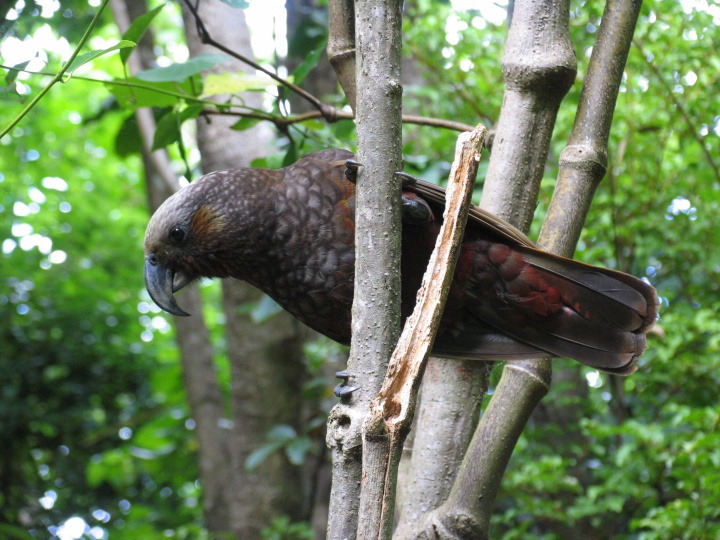 A new round of monitoring in a 20-year programme has shown an impressive four-fold increase in the population of kākā in the North Island’s Pureora Forest.

“What the long-term monitoring has shown is a four-fold increase in the population of kākā at this site – from an estimated 640 birds in 2000, to an estimated 2600 birds in October 2020,” he says.

“This is a very impressive result from our work to protect this species over the past twenty years.”

The North Island kaka found in Pureora are classified as “at risk, recovering”. Although common in New Zealand in pre-European times, by the 1930s they were reduced to localised populations in a small number of areas – including Pureora. Kākā are known for their boisterous morning and evening group socialising, with amusing antics and raucous calling.

The major threat to the kākā is predation by stoats and possums, with hole-nesting female kākā particularly at risk.

Terry Greene says the monitoring work, completed in October, determined population size (estimates of density or abundance) through the point-based distance sampling method. Distance sampling is a widely used methodology for estimating animal density and abundance in a particular area.

“For this work, we visited 130 points on a grid within Waipapa, and people equipped with laser range finders measured the distance to kaka within a 100m radius of each of those points,” Terry Greene says. “Using a mathematical model, we can estimate the population density based on detections from those points.”

The observers who did the monitoring work in the field said it was immediately apparent the kākā were very common in the forest.

“Our observers also noted plenty of other birdlife in the area – a very positive sign our long-term conservation and predator control work is paying off,” Terry Greene says.

“It’s also worth noting the comparison in the time spend monitoring the birds in 2020, compared to previous years. This time, the groups of observers required only five survey days to get the required observations done.

“When these counts were initiated, back in 2000, it would often take almost twice as many survey days to accumulate the required minimum of 80 observations for robust estimation of population density.”

“We’re very pleased with the result as it demonstrates how valuable ongoing conservation work is in protecting native species and rebuilding their populations.”

“We have a beautiful pristine forest, amplified with the loud calls of the Kaka and the beautiful chorus of the Kokako, Tui, Toutouwai, and many, many others, that remind us of our childhood days,” she says.

“Predator control must remain in place, be maintained and developed regularly, to combat the resistance and behavioural patterns of these predators, to totally eradicate them.”