These regions – Auckland, Northland, Waikato, and Bay of Plenty – collectively grew by 321,400, and are now home to 54 percent of New Zealand’s population.

These are the first subnational population estimates to fully incorporate the 2018 Census and 2018 post-enumeration survey (PES) results. Estimates back to 2013 have now been revised. This is a normal revision that takes place after census and PES results are available. Estimates after 30 June 2018 now use the 2018-base estimated resident population as the starting-point.

"One of the purposes of running a census is to recalibrate national and sub-national population estimates," population insights senior manager Brooke Theyers said.

"The census coverage results from the 2018 PES, also released today, are crucial to ensure the population estimates are the best possible measure of how many people live in every community across New Zealand."

At the national level, the June 2018 population estimates have been revised up 60,000 (1.2 percent). This revision is spread across New Zealand, with estimates for most areas up slightly, and estimates for some areas down slightly.

"The recalibration of the estimates has generally confirmed the subnational trends evident in the initial population estimates."

Auckland region had the largest population growth, increasing by 187,300 people from 1,493,200 in 2013 to 1,680,500 in 2019. This is equivalent to the population of Dunedin and Invercargill cities combined being added to Auckland over six years. Auckland’s average population growth rate was 2.0 percent a year.

“Although Auckland has the largest population, other regions have seen faster growth since 2013,” Mrs Theyers said.

“Net migration drove the growth in these regions which reflected the significant contribution of international migration to New Zealand’s overall population growth.”

Bay of Plenty had an average annual growth rate of 2.7 percent, followed by Northland at 2.4 percent and Waikato at 2.3 percent.

Otago also grew by 2.3 percent a year, driven by growth in Queenstown-Lakes district. 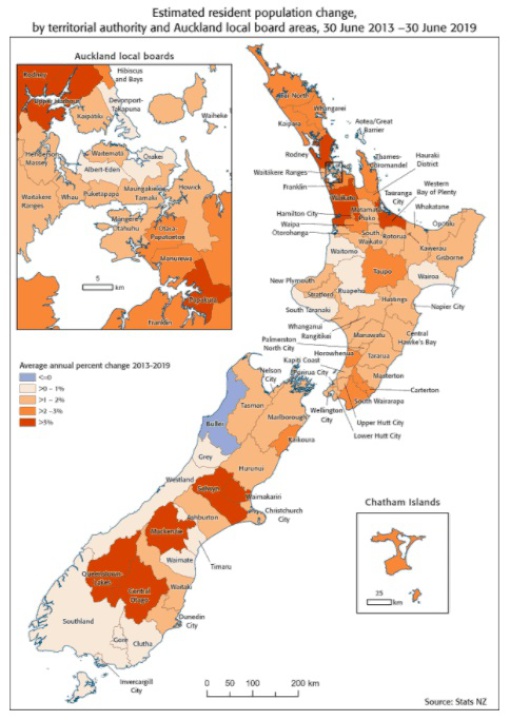 Among the 67 territorial authority areas, the fastest growing between 2013 and 2019 were Queenstown-Lakes District (up 7.1 percent on average each year), Selwyn District (6.0 percent), and Central Otago District (3.7 percent). Buller District had an average decrease of 1.5 percent a year.

Auckland local areas see growth across the board

Subnational population estimates at 30 June 2020 (provisional) will be published on 22 October 2020.

“The latest ethnic population estimates show that about two-thirds of New Zealand’s Asian and Pacific populations live in Auckland, and about half of our Middle Eastern, Latin American and African population,” Mrs Theyers said.

“Overall, Auckland is home to just over one-third of New Zealand’s total population.”