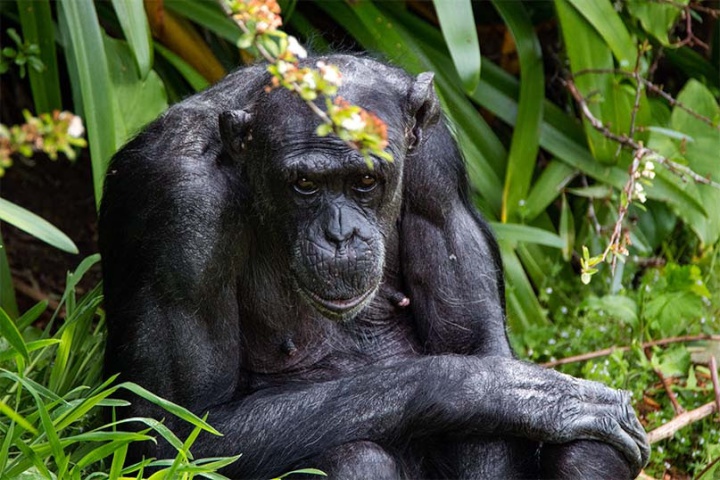 Zoo regulars will know Sally as she’s easy to spot. She is generally found at the bottom public viewing area of the chimp enclosure with a blanket, preferably pink, either enjoying the sun or engaging with visitors.

The chimp troop is currently off public display while their outdoor enclosure receives a major upgrade. They are living in the two-storey chimp house, which has had an outdoor area added to it. The upgraded enclosure will be open soon.

Hamilton Zoo Curator of Exotics Catherine Nichols said Sally’s affinity with people was a reminder of her past. She spent the first two years of her life being hand-raised after her mother rejected her soon after her birth.

She was taken in by Auckland Zoo’s head primate keeper at the time, Richard Seccombe, and his wife Georgie. Together they raised her alongside their children.

Sally returned to Auckland Zoo after becoming too big to manage at home and formed a troop with sister Suzie, who had also been hand-raised, Mike and Lucy and their sons Lucifer and Luka. In October 2004 the troop transferred to Hamilton Zoo.

Ms Nichols was a mammal keeper at Hamilton Zoo at the time of the transfer and travelled between Auckland and Hamilton for five months before the move to get to know the chimps and build a bond with them.

“It was obvious early on that Sally leaned toward human contact. She clearly loved the Auckland Zoo primate team and she had a fantastic memory so was able to recognise people and other chimps too,” said Ms Nichols.

“She continued to thrive in the new purpose-built chimpanzee enclosure at Hamilton Zoo. She had the opportunity to sit back in her own space and watch and learn chimp behaviour and solidify her place in the troop.”

Over the 16 years Sally has been at Hamilton Zoo she has become a firm favourite with her keepers and visitors.

Primate keeper Rowena Fraioli said Sally was “the lovely nana of the group”. While she loved interacting with the public, she had also developed a beautiful relationship with the toddler of the chimp troop, Chiku, who was born in 2016 to Sanda and Luka.

“They are really sweet together. Chiku will give her gentle hugs, they will snuggle up together and groom each other, and Sally will hold Chiku’s hand on equipment so Chiku can guide her,” said Mrs Fraioli.

“But she does have a tough, bossy side and she’ll let the other chimps know if she’s not happy with them about something.”

Life expectancy in the wild for chimpanzee is around 30 to 40 years. In zoos they can live up to 10 years longer. But life in the wild for these endangered primates is tough due to habitat destruction, hunting for bush meat and the illegal pet trade.

Mrs Fraioli said a simple way to make a difference in the lives of Sally’s wild counterparts was to help conserve their habitat by purchasing products with the Forest Stewardship Council (FSC) logo, which shows they come from a responsibly managed forest.

Special treats for Sally on her big day would include her favourite food, Weet-Bix.

“We like to make a bit of a fuss on their special day so as well as treats we’ll be making sure there’s decorations and some fun enrichment for her and all the chimps to enjoy,” said Mrs Fraioli.

She said the chimps had been keeping well.

“The troop has bonded really well over the last few months and Sally has been continuing to learn more about chimpanzee dynamics. She adapts really well to her environment and even as she gets older she’s still capable of picking up new things.”

With the public unable to visit Sally for her birthday, the primate team agreed the best way people could celebrate her was by making a donation to the Jane Goodall Foundation.

The Foundation is dedicated to protecting chimpanzees and conserving critical habitat while strengthening surrounding communities and empowering the next generation of conservation leaders.