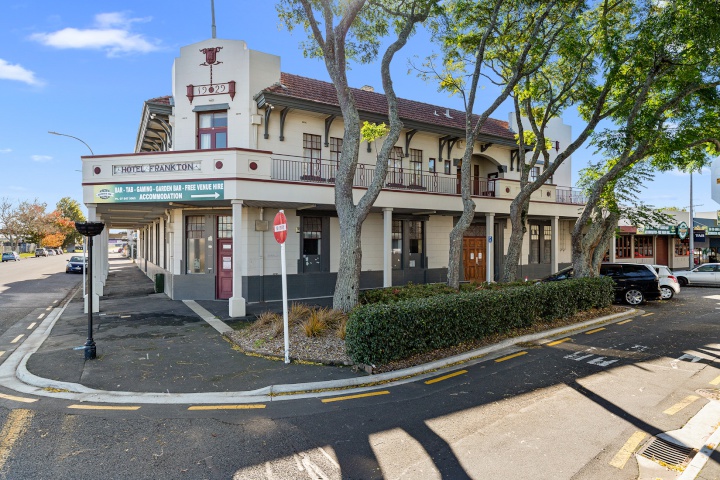 A classic 91-year-old Kiwi workingman’s pub with strong links to the industrialisation of provincial New Zealand and now owned by a former All Black has been placed on the market for sale.

The hotel was originally located directly opposite what was Frankton Junction station until the depot was relocated several hundred metres west in the 1930s.

Continuously modified and expanded over the ensuing decades, the current Art Deco styled Frankton Hotel structure was completed in 1929, with minor alterations and extensions made in 1943, 1956, and the 1970s. The land and buildings are owned by former All Black front rower Graham ‘Moose’ Whiting who played 31 matches for the ABs in the early 1970s.

The historic pub overlooks Hamilton’s railway lines and sidings - part of the main trunk line linking Auckland with the Central North Island and Wellington routes. Since the turn of the last century, the main trunk rail line running through Frankton has been the spine for freight movements around the North Island – transporting primary produce such as sheep and beef meat butchered at the Horotiu freezing works, logs from the Central North Island forests, and coal from the Huntly mines.

As the closest ‘watering hole’ to the rail yards, the Frankton Hotel was a natural after-work venue for the hundreds of men who worked in the sidings, goods sheds, engineering workshops and passenger services over the decades. Because of its axis position and trunk line linking up to the Bay of Plenty and the Port of Tauranga, the Frankton Junction railyards were among the busiest in New Zealand.

Bayleys Hamilton salesperson Josh Smith said that while the two-storey character venue on the corner of Commercial Street was built on servicing the needs of rail workers from a bygone era, rail was also the cornerstone of the venue’s future.

“The pub is located some 200 metres from Hamilton train station – which is about to enter a new era as it connects the city to Auckland with a commuter rail service,” Mr Smith said.

“This new iteration will add to the pub’s existing clientele base - being the preferred licensed hospitality operation for the thousands of factory floor workers employed in the light industrial businesses and engineering firms in the surrounding Frankton area.

“In addition to these patron demographic target markets, the Frankton Hotel will be conveniently located just a short walk from the 75-unit Rawhiti Village residential development project which is spearheading the gentrification of the Frankton area. Hamilton CBD is just a 1.6 kilometre walk away.

“The pathway toward re-inventing the Frankton Hotel as a hospitality entity appealing to different market sectors is already underway – with the Ministry for Culture and Heritage already signing an agreement with the current owners to fund $40,000 worth of refurbishment and structural engineering and design plans for the venue.”

The 1,580 square metre dual level Frankton Hotel premises sit on some 1,618 square metres of flat freehold land – and are leased to the venue’s hospitality business tenants until 2024 with three further six-year rights of renewal generating annual rental of $104,000 plus GST and outgoings. Various portions of the hotel have new building standards ratings of between 25 – 85 percent.

“The multiple existing bar and meeting room spaces within the High Street/Commercial Street property would allow any new owner of the Frankton Hotel to look at upgrading the greater premises with a view to retaining but modernising the ‘public’ bar servicing the local working clientele, and simultaneously creating a separate more upmarket bar/restaurant amenity to cater for a white-collar and family-orientated customer base,” Mr Smith said.