A report from our first two weeks outside Parliament

E Tū: Stand Up for Our Future 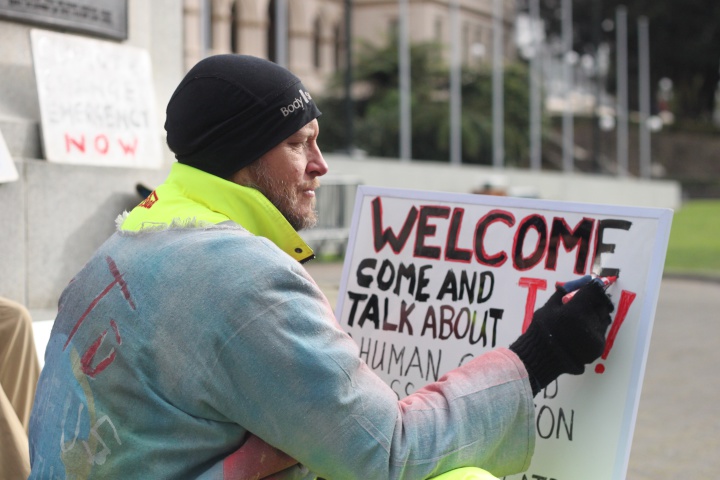 On July 13th, three of us began a hunger strike here in Wellington: David Goldsmith (52), Robin Treadwell (66), and me, Tim Musson (50). Robin’s from Waiheke Island; David and I bused up from Ōtautahi (Christchurch). Sadly, Robin had to leave on her second day to be by her mother’s bedside. We send our love.

David and I arrived in Wellington fourteen days ago. Since then, we’ve been keeping a daily vigil on the lawn outside Parliament Buildings. Each day we’re joined by local supporters, and each day we meet new friends. Sometimes there’s just a couple of us, sometimes a dozen or so.

Our support team (some here, and some at home in Ōtautahi) includes volunteers representing Fridays For Future, Extinction Rebellion, 350, and Oil Free Wellington. The hunger strikers have been provided accommodation by the Catholic Church, just a short walk from Parliament. The kindness and generosity of all these people has been incredible.

My own strike was short: just four days. I wanted to get a better idea of what David and Robin were in for, before switching to a support role. On Friday morning I ended my strike carefully, as planned, with a small apple for breakfast. I took the rest of the day gently, giving my innards time to power back up. A few days earlier I’d have rated that apple seven out of ten, but on Friday it scored a solid 20!

David’s hunger strike is now in its eighth day, and will continue, along with our vigil. When the politicians return from recess on Tuesday, it will be his ninth day without food.

What’s the point? What do we hope to achieve?

We aim to make the climate crisis the major election issue it needs to be, and to keep it up-front following the election. We’re calling on individuals, activists, farmers, scientists, community groups, church groups, organisations, young people, old people, everyone who cares about the future — to join together and stand up (e tū!), publicly. Now, and in the lead up to the election. To be impossible to ignore. Because there’s no more time for inaction on the climate crisis.

Many of this country’s farmers are noticing the first effects of a changing climate. It’s becoming impossible to ignore. Without support from government, many will struggle to adapt. The problem for farmers and environmentalists isn’t each other, it’s decades of poor government. We need to support each other as allies pushing for fair, sustainable government that works for all of us as the crisis unfolds.

If you can’t join us in Wellington, start a vigil wherever you happen to be. Get local friends and community groups involved. (In Ōtautahi there’s a vigil each Friday from 12:30 till 1:30 PM outside the bus exchange.)

We’re absolutely not asking anyone else to hunger strike. It’s something that feels right for us, personally, right now. It signifies for us the urgency of the climate crisis, and the fact we’re willing to give up some normality to achieve a viable future. But we’re being careful. We have friends and family to return to. As Robin says, “There’s no point in being a dead activist.”

And here’s why it’s so urgent.

Most people don’t realise there’s a 30 to 40 year lag time between CO emission and its effects being felt. So we’re currently experiencing disruption — wildfires, melting, unseasonal weather, more frequent and extreme hurricanes, et cetera — from emissions up until around 1990. Since then, we’ve more than doubled the total amount we’ve released. We haven’t felt the effects of that doubling yet, and the stuff remains in the atmosphere for thousands of years. Things won’t settle down any time soon.

Our kids have increasing climatic chaos, increasingly frequent crop failures, increasing water security issues, and increasing global conflict and forced migration to look forward to. Even if we stop emissions tomorrow. If we don’t slow this down and stop burning fossil fuels, our children and grandchildren are in for a very uncertain future.

The conservative and “politically acceptable” IPCC reports, which governments base climate policy on, depend on large-scale geoengineering. To meet Paris Agreement targets of 1.5°C and 2°C, IPCC calculations assume practical Carbon Capture and Storage (CCS) technologies will be developed in time, able to extract tens of gigatonnes of CO from the atmosphere each year and store it underground.

It’s looking less and less likely that this technology can or will be successfully developed and implemented at the required scale, in time to meet those targets.

Global energy growth is outpacing decarbonization. Greenhouse gas emissions are increasing, not decreasing. The amount of CO going into the atmosphere between 2015 and 2019 grew by 20 percent compared to the previous five years.

Too few people are aware of these and many other serious, related, problems. It’s government’s duty to make sure people understand this stuff, but they’re not even discussing it openly. Several influential politicians (including our own Judith Collins) are in total denial of established scientific facts.

That’s why I’m outside Parliament in Wellington right now with my friend David and others, asking you to stand vigil with us, wherever you are, as we head toward the next election.

Incompetent government worldwide, including ours here in Aotearoa, is failing all eight billion of us.

I’ll end with some excerpts from David’s blog posts over the past two weeks. For the full posts and to follow the blog, please visit: https://etu4future.nz

Ollie Langridge’s daughter Sasha dropped by to show us her support. That was the highlight of today for me. I want my actions here to honour Ollie and the 100 days mahi he did on Parliament’s lawn last winter. To have Sasha drop by and show solidarity with us and her Dad really means a lot. Her visit further cemented for me the connection between our action now and Ollie’s 100 day vigil last year.

We’re standing up for our children’s future and we’re asking for you to stand up too. We don’t ask you to hunger strike (unless of course your call to do that is crystal clear and irrepressible). Come join us in a vigil, grieving for our childrens’ future, grieving for the status quo which says it is impossible to change and give up our current privilege for their future chance of life.

Hunger striking is feeling a little more difficult at the moment. I notice food fantasies visiting occasionally. I’m also feeling quite light headed and slow. Conversations feel quite difficult at times. However, I’m still in good spirits and determined to continue.

Today has been special. Many very engaged conversations. I’m wondering what made today so different, because I had at least 6 long and in-depth conversations with people. A lot of learning was shared both ways. And it wasn’t that I was trying to keep people engaged, they were engaged on their own. I suspect I was different also.

E Tū, stand up! My hunger strike is primarily a call to you. Government won’t act until the people speak en masse. So, ETū4future is not another organisation, rather ETū4future is simply a vision of that mass movement we need, as a coalition of individuals and existing groups, churches, affiliations. Come join us at Parliament or start your own vigil anywhere. Follow Greta’s example!

I’ll finish with a quick word on how I’m doing. My mood and determination are very good. Obviously not eating for 6 days is having effects. I am now consistently losing about 0.6kg a day (the weight loss was higher at the start). After 6 days fasting I am down to 75kg, which is probably my ideal weight (I started my fast slightly overweight). So far this is feeling easy. It is early days but right now I’m feeling confident about my 3 week target. I am weaker and slower, and I do feel light headed especially when I stand up. My tinnitus is getting more intense and when I get over tired my ears also start to feel weirdly blocked. The most difficult thing is getting good quality sleeps. I’m waking very early and feel tired a lot. On Sunday I may take part or all of the day to rest at Viard House and in between rests catch up on some administration work that’s overdue. I’m hoping Tim and others will hold a presence on the lawn for me.