Conservationists will spend their summer on a remote predator free island to try and find out why a population of critically endangered kākāruia/kārure/black robin is declining. 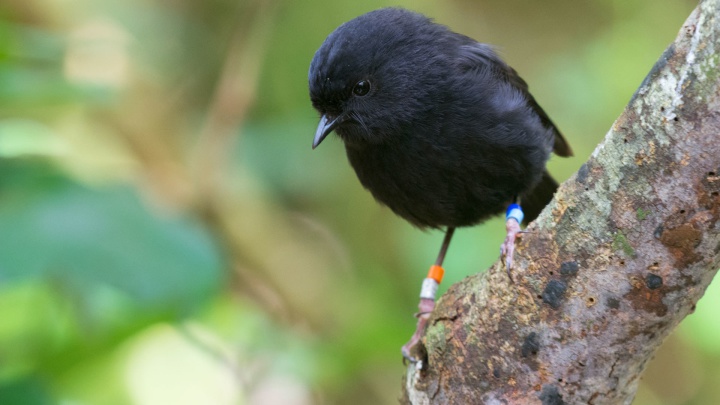 This iconic species’ recovery from the brink of extinction is an internationally recognised success story, but with less than 290 adult birds living in just two populations, the black robin’s recovery is far from finished.

Over the last two years, the population on Mangere Island/Maung' Rē has declined by 40% to approximately 30 birds. Fewer than 10 of these birds are female.

Department of Conservation (DOC) Ecology Technical Advisor and lead of the Black Robin Advisory Group, Tertia Thurley says this lack of breeding pairs on Mangere poses a huge risk for the population and urgent action is needed.

“While you do see small populations fluctuate over time, this high decline puts the Mangere population at risk of being completely lost.

“It also increases the risk of losing the species entirely. If we lost the Mangere population, everything would depend on South East Island/Rangatira/Hokorereoro. Although the Rangatira population is stable with about 260 adults, if something like a rat incursion or natural disaster happened on Rangatira, that could be the end for these birds.”

In September, hui involving experts, conservationists, locals, imi and iwi were held to discuss management of the species.

The decision was made to focus on increasing the number of breeding pairs on Mangere, starting with monitoring the population over the summer.

Consultation is continuing around other management actions, including a potential translocation from Rangatira to Mangere next year.

“We’re not yet entirely sure what’s causing the decline, but things are always more challenging in a smaller population. The information we learn from monitoring will build our knowledge about the species and why the Mangere population has dropped so dramatically.”

A small rotating team of two people at a time will be out on the island to keep an eye on the birds until the end of February. The first team has recently returned from the island.

“A couple of the birds have started building nests and we have one egg already, which is a promising start – but it’s still early days.

“What we learn from this monitoring will build our knowledge about this population and about black robins as a whole, and will help inform our approach in the future.

“We also want to acknowledge the involvement of the local community and iwi and imi. Locals are very proud of their black robin, and it is a miheke species for Moriori and taonga for Ngāti Mutunga o Wharekauri. It’s great to have so many people on board caring about the future of black robins.”

There are only two populations of black robins on two reserve islands in the Chatham archipelago, 800km offshore from mainland New Zealand. Read more about the species on our website: https://www.doc.govt.nz/nature/native-animals/birds/birds-a-z/black-robin/

South East Island/Rangatira/Hokorereoro and Mangere Island/Maung' Rē are both predator free islands, home to a range of rare plant and animal species.

The future of black robins depends on maintaining the predator free status of the islands. If even one rat made it onto one of the reserves, it could potentially kill a number of black robins, and could also have devastating effects for other native species such as tchuriwat’/tūturuatu/shore plover, snipe, and Forbes and red-crowned parakeets.