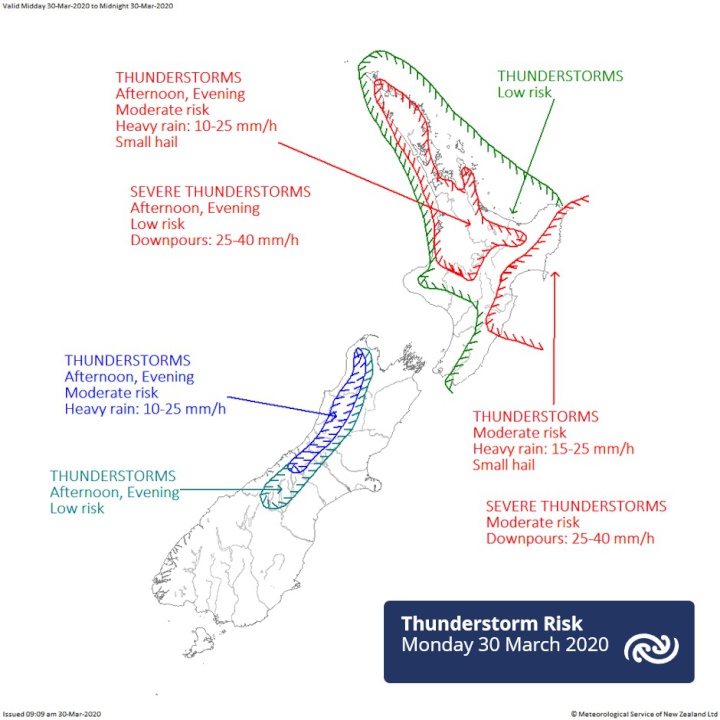 The MetService is forecasting a slow-moving front to continue to affect the eastern parts of the country. The heaviest rainfall is expected for Gisborne and Hawke's Bay today (Monday) into Tuesday morning, and a Heavy Rain Warning is still in place there. Further heavy rain is also forecast for the Wairarapa, with a Heavy Rain Watch in effect from tonight until Tuesday lunchtime.

The front already brought well-needed rainfall over the past weekend to the drought stricken Wairarapa, with Masterton measuring 138.4mm and Ngawi getting 112.2mm between Friday and Sunday. The eastern South Island got some of the action too, with Kaikoura reporting a total of 76.8mm for the same period.

MetService meteorologist Mmathapelo Makgabutlane explains: “Localised downpours are also a risk for Gisborne and Hawke's Bay today, and a Severe Thunderstorm Watch had been issued for these regions.”

A pool of cold air in the upper atmosphere is creating favourable conditions for thunderstorm activity over the central and eastern parts of the North Island, some of which could be severe, with downpours over the Gisborne and Hawke’s Bay regions this afternoon and evening. MetService has also advised of the associated possibility of flash flooding, especially about the low-lying areas. There is also a renewed risk of thunderstorms tomorrow afternoon and evening.

Further south, the rain, which has been affecting the eastern South Island over the weekend, will ease later tonight as the front weakens, with only drizzle patches featuring tomorrow. The remainder of the island will be mainly fine, with some ‘spotty’ showers inland.

The weather quietens down from Wednesday as the front pulls away from the country, bringing a break in what has been a wet few days, though the eastern North Island could still see the occasional afternoon or evening shower. People in the rest of the North Island as well as the South Island, however, can look forward to good “bubble walk” weather.