Wet weather continues for the north 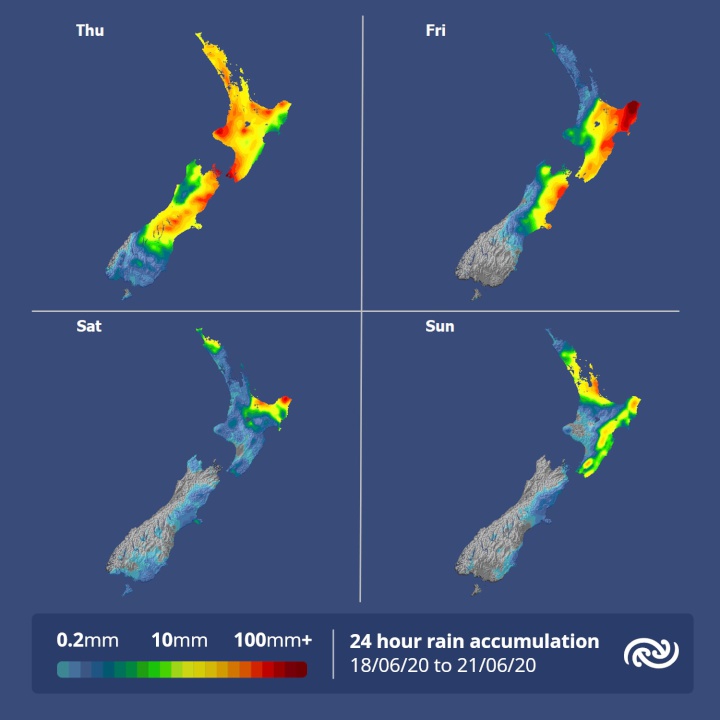 New Zealand has had an interesting weather week, with rain, winds and snow all making an appearance with noticeable flare for many across the country. MetService says there’s more to come through the coming weekend.

Those in parts of the South Island woke up to a winter wonderland on Thursday, after a push of cold air overnight left a blanket of snow over Otago, Canterbury High Country, and the Southern Lakes, with snow even settling at lake level in Wanaka, a height of around 350 metres.

Wellington, which has been clouded over with rain since the start of the week, has a Heavy Rain Warning in effect for Thursday. MetService meteorologist Mmathapelo Makgabutlane elaborates: “More than 30mm of rain fell during the first half of the day across the region, and more rain is expected for the rest of the day.”

The focus switches to the upper and eastern North Island over the coming days, as a low pressure system currently just west of the country gradually makes its way around the top of the North Island. This system draws warm, moist air from the sub-tropics over the island and brings rain to many. “The resulting northeasterly winds set up a rain pattern that sees parts of Bay of Plenty and the Gisborne ranges get heavy rain; some places, particularly those in the mountains, could get around 130 to 180mm between today and Saturday,” Makgabutlane explains.

As winds turn easterly the activity spreads to those regions with a north to south coastline. Coromandel, western Bay of Plenty, Gisborne, and Hawke's Bay could all see some decent rainfall numbers by the end of the weekend. “People are advised to continue keeping an eye on the latest severe weather information,” says Makgabutlane.

Scattered rain is on the cards for much of the remainder of the North Island at times this weekend, which might not bode well for Wellington rugby fans. Those in the Waikato, however, may have better luck, with a lower likelihood of a wet Saturday afternoon.

Things are looking much quieter on the other half of the country. “The east and southern coastal areas could still see a shower or two, but all-in-all, the South Island can expect a quieter weather weekend,” Makgabutlane says.