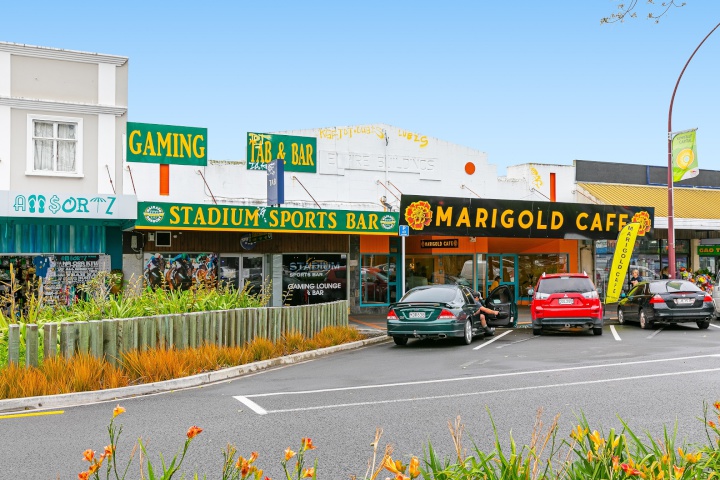 The land and building housing a popular sports bar run by one of provincial New Zealand’s longest-operating hospitality enterprises have been placed on the market for sale.

The BOP Brewery company has run a number of bars in the Bay of Plenty over the past 25 years – such as The Rising Tide in Mount Maunganui - as well as making an extensive range of alcoholic beverages – including beers, ciders and ready-to-drink blends.

The land and building at 91 Jellicoe Street are now being marketed for sale by Bayleys Hamilton. Salesperson Josh Smith said the premises had a floor area of approximately 230 square metres on 731 square metres of freehold land, including 20 car parks at the rear of the building. The building also encompasses a gaming lounge.

“Jellicoe Street is the main route in to and out of Te Puke’s town centre, and the site offers profile visibility to both pedestrian and vehicle traffic,” Mr Smith said.

“The growing town of Te Puke is recognised as the country’s ‘horticulture capital’ and its local economy is underpinned by the numerous lifestyle blocks, kiwifruit orchards and dairy farms in the surrounding areas. These primary industries are a mainstay of the New Zealand economy – and are well positioned to maintain their strong performance in the rapidly-evolving environment shaped by Covid-19,” Mr Smith said.

“As a key service town supporting these activities, Te Puke has continued to grow
and prosper. The town’s population swelled by 18 percent between the censuses held in 2013 and 2018, and is now poised to top 10,000.”

“Te Puke is less than a two-hour drive from Hamilton, three hours from Auckland and half an hour from New Zealand’s busiest port at Tauranga – meaning the town benefits from the growing economic activity associated with the ‘Golden Triangle’ zone linking those three centres.