Former Pukekohe woman Nat Farrell jumped at the chance to step out of her comfort zone and take on a new role to help the Royal New Zealand Air Force’s (RNZAF) recent Operation Christmas Drop in Guam. 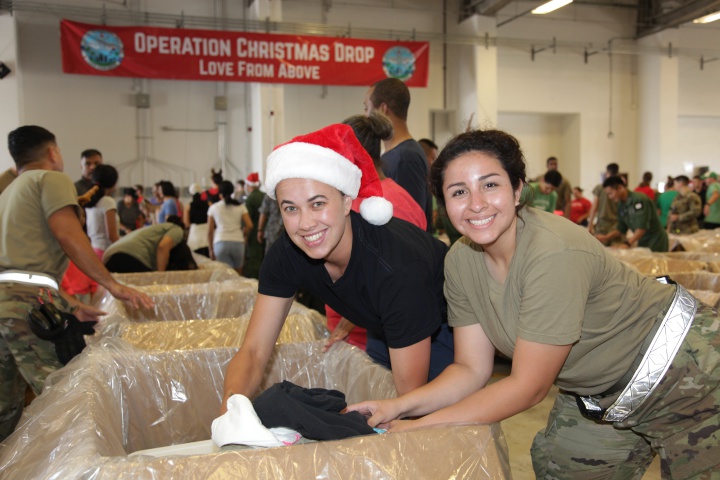 Corporal Nat Farrell, left, with an American counterpart filling Christmas bundles to be dropped to more than 20,000 people on 55 Micronesian islands.

RNZAF Logistics Specialist Corporal Farrell, who attended Pukekohe High School, became the Operations Support for Operation Christmas Drop, meaning she was responsible for the administration of the RNZAF air crew during flights.

Operation Christmas Drop is an annual United States Air Force tradition dating back to 1952. It started when locals on the island of Kapingamarangi waved at the crew of a passing WB-50 Superfortress, prompting the crew to gather supplies from the aircraft and parachute the goods to the islanders.

In its 68th year, Operations Christmas Drop included air forces from Australia, Japan, and for the first time New Zealand, which sent a Hercules C-130 aircraft and personnel from No. 40 Squadron.

It ran for a week, with five crews covering 55 Micronesian islands spread across 1.8 million square nautical miles. There were 176 bundles of critical supplies dropped to more than 20,000 people on the islands.

It was seen as a valuable opportunity for the RNZAF crew to practise low-cost, low-altitude airdrops from a Hercules C-130 over un-surveyed drop zones.

Being Operations Support Orderly was a new role for Corporal Farrell, who is usually stationed at RNZAF Base Auckland in Whenuapai.

“My day-to-day job is interesting but going to Guam for Operation Christmas Drop has taught me to think on my feet and I gained a whole new skill set,” she said.

“I have travelled extensively with the Air Force but this was my first time to Guam, so this trip was a lot of firsts for me.”

Corporal Farrell spent one morning packing bundles containing rice, canned goods, clothing and toys to be dropped to outlaying Micronesian islands by the aircraft. The bundles were packed by the RNZAF air crew, maintenance and support personnel from the participating nations, and volunteers from the US Air Force.

“Packing up the bundles was great. It is good to know people on the atolls will have a good Christmas,” she said.