The Council of Licenced Firearms Owners (COLFO) has released details of the ongoing delays in processing licence renewal applications, that is forcing owners to pass their firearms to others while they wait for licences to be renewed.

Police have refused to store the firearms of individuals who are temporarily unlicenced due to the Police’s own administrative delays. Correspondence from the Police shows it regards these renewal applicants as breaking the law if they hold their firearms – despite there being limited options to store firearms with other licence holders, and the firearm owners having existing compliant secure storage.

COLFO Chair Michael Dowling says the fact that Police are unable to keep to time on the licence renewal processing system reveals why their improvement programme over the previous programme is not delivering. Scarce resources used to plan and run the ”buy back” have left the administration months behind on renewal and new application processing.

“Members of our community are extremely concerned by Police delays in processing firearms licence renewals.

“Police have asked owners to apply for renewals many months ahead of the normal times, and are not processing speedily when people apply in good time. Clearly, Government did not consider the impact of the changes they made on already strained resources. Many members are questioning when Government will implement the change of administrator they agreed to in the Arms Amendments last year. Police do not have the resources or ability to be administering the Arms Act.”

Dowling says that recent changes to the Arms Act will create problems for any licenced firearms owner that shares a residence with someone who does not hold a licence.

“Police are challenged by the realities of life, where licenced and unlicenced people live in the same households or are close family members.

“The delays in processing licences mean Police can charge people who would normally be law abiding for illegal possession if there are firearms in their family home. This is particularly difficult for rural communities. It is worth noting that when the first Arms Amendments were made firearm owners were enabled by Government to keep their firearms as long as they remained in the secure storage until the administration was completed. Perhaps this needs to be addressed by Government to avoid unnecessary expense and movement of firearms in the community.

“We urge the Minister to urgently address these administration delays so licenced firearm owners can continue to be law abiding.” 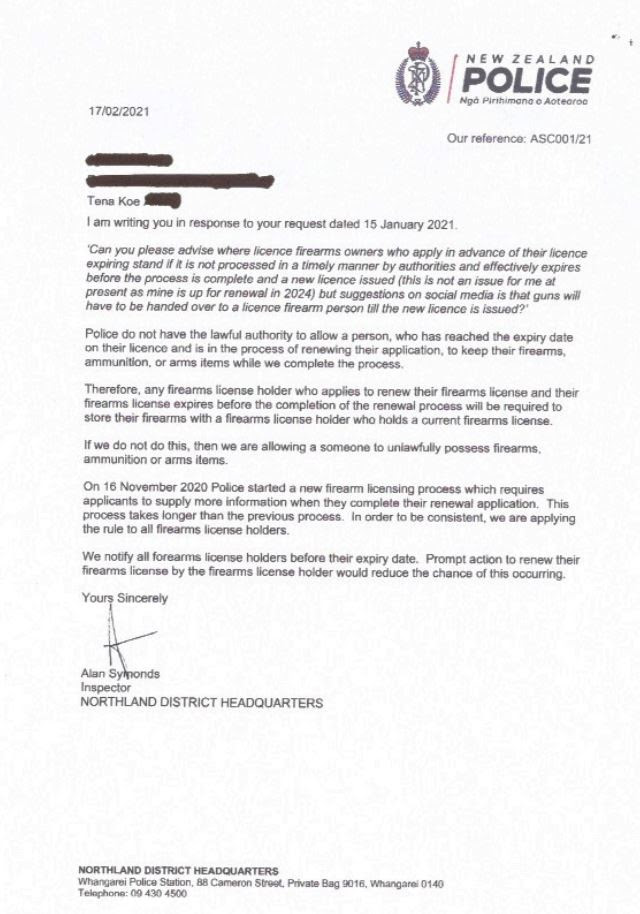