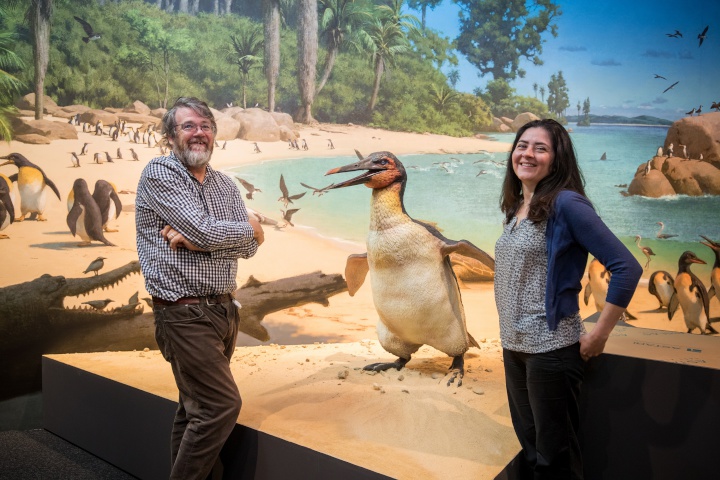 The now world-famous giant parrot, Squawkzilla, and the monster penguins of Waipara are the stars of Canterbury Museum’s new exhibition Ancient New Zealand: Squawkzilla and the Giants, which opens Friday 13 December.

Exhibition visitors can see many of the fossils uncovered in the last two decades that palaeontologists are using to piece together Aotearoa New Zealand’s ancient past. Research by scientists from Canterbury Museum, the Museum of New Zealand Te Papa Tongarewa, Flinders University (Adelaide), the University of New South Wales (Sydney) and the Senckenberg Natural History Museum (Frankfurt, Germany) has revealed some very strange beasts that lived millions of years ago in ancient New Zealand.

Near Waipara, North Canterbury, palaeontologists have found fossils from more than 60 million years ago which show that giant penguins swam in the warm oceans around the ancient subcontinent of Zealandia.

Twenty million years ago, Central Otago was submerged beneath a lake 10 times the size of today’s Lake Taupō. Fossils from ancient the lake bed include species of crocodile, turtles, a flamingo-like bird and a burrowing bat, together with Squawkzilla, at one-metre high, the world’s largest parrot.

Three recent discoveries – Squawkzilla the giant parrot (Heracles inexpecatus), a human-sized Waipara penguin (Crossvallia waiparensis) and a seabird with teeth (Protodontopterx ruthae) – made headlines around the world earlier this year.

Squawkzilla and the Giants presents the results of this research through life-sized models of the giant birds, real fossils and illustrations. The fossils of the ancient bird species are displayed alongside specimens of their modern relatives from the Museum’s collection.

Canterbury Museum Director Anthony Wright says Squawkzilla and the Giants is set to be a summer blockbuster for the Museum.

“We think visitors will be blown away when they see the life-size models of the penguins, the parrot and the crocodile. While the exhibition will be entertaining, it’s grounded in science and we hope people will come away having learnt a little more about the ancient past of Aotearoa New Zealand.

“For the Museum this is a very special exhibition, as it’s the culmination of 20 years’ research by Museum curators, collaborating with colleagues in other institutions. Their research continues to have a significant impact on global understanding of how birds – particularly seabirds – evolved across the planet.”

The Museum has created a set of collectable cards, featuring extinct animals from the exhibition, which will be released over the course of the exhibition. Visitors can collect a pack of these cards after completing an activity sheet with questions about the exhibition.

Ancient New Zealand: Squawkzilla and the Giants runs from 13 December until 19 July 2020 at Canterbury Museum.